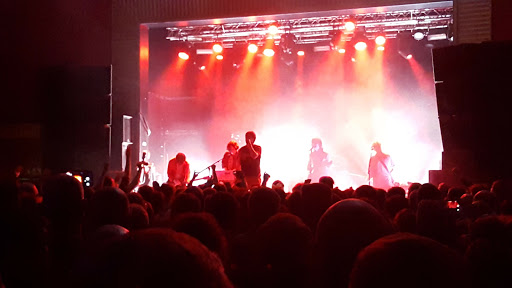 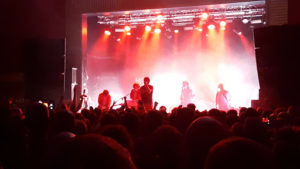 It’s fair to say that the past week has been difficult for Cabbage but the band returned to Manchester for their biggest headline slot yet…Wayne Carey as there to report on their triumphant homecoming show.

The Mossley boys are back and have upped their game even more since I last saw them live at Gorilla.

The room is packed with new fans and old waiting in anticipation to see where they go next.

They certainly don’t disappoint entering the stage to mass applause. Lee is cheekily dressed in North Korean uniform which gives me a chuckle and Joe looks the part of the punk rock guitarist he should. They launch the gig with an excellent duo of Uber Capitalist Death Trade and Necroflat In The Palace which immediately gets the room bouncing and I swear the security up front are terrified of a stage invasion.

Indispensable Pencil is as excellent as ever and then Lee announces to the audience the introduction of a new song which has a similar vibe to Gibraltor Ape and goes down well.

Joe takes over on vocals for the next few songs including the excellent Dinner Lady and Lee strips of as usual, going topless for the rest of the night. It’s Grim Up North Korea still remains my favourite Cabbage tune and the crowd sing along loudly. Gibraltor Ape gets the crowd moshing even more than they have been all night at the front as does Fickle with it’s Mondays like rhythm. They calm down a bit with Because You’re Worth It then launch into the ever brilliant Kevin for the closer as they don’t do encores.

Cabbage just seem to get better and better every gig. A band that can’t be pigeonholed and are still rising. Everyone needs to see Cabbage live at least once in their life to witness a band that seemed to start off as a bunch of yound lads having a laugh but have the potential to become one of THE Manchester bands to join that famous list of greats.

Bring on The Ritz!!