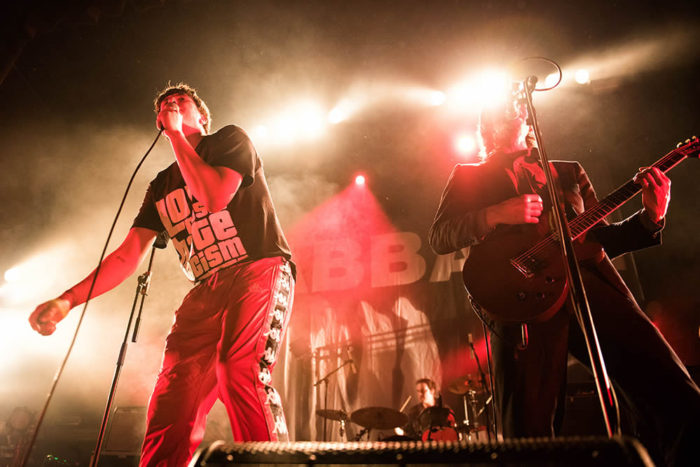 Mossley’s finest, Cabbage took over the whole of Manchester’s O2 Ritz for a ten slot mini-festival which will go down in history as one of the cities finest ever live events. Packed between two stages, the upstairs hall and the lower bar, the bands flowed slickly into one another, which saw masses of fans running up and downstairs between performances. Nigel Carr reports back for Louder Than War with photographs by David Gleave and Melanie Smith.

We arrived to watch Rhythm Method who were in full swing on the main stage. Poppy, funk rap with a Mike Skinner/Streets style delivery. It was an odd choice for what was essentially a punk event, but they were well received by the small but growing audience.

The downstairs bar at The Ritz is a small space with pillars in the way so it wasn’t easy viewing Lady Bird. Hot and sweaty, the band soon stripped off to their waists and the punchy rap-infused punk had this shoulder to shoulder audience on-side from the off.

The Blinders followed on the main stage with the support slot of the year. We’ve described this band as delivering ‘visceral punk’ but this nuclear blast of a performance will go down in history as one of the best ever, such was the intensity of their set. From previous single & opener, Gotta Get Through, through Swine, in all its filthy pulsating glory, to new single L’etat C’est Moi and Et Tu, Brutus, Berlin wall. Elevated to the most extreme state of high art with an adoring crowd who moshed along to every note like it was their last day on this earth, the band left an indelible stamp on everyone present. We can’t wait for their debut album due this Autumn! 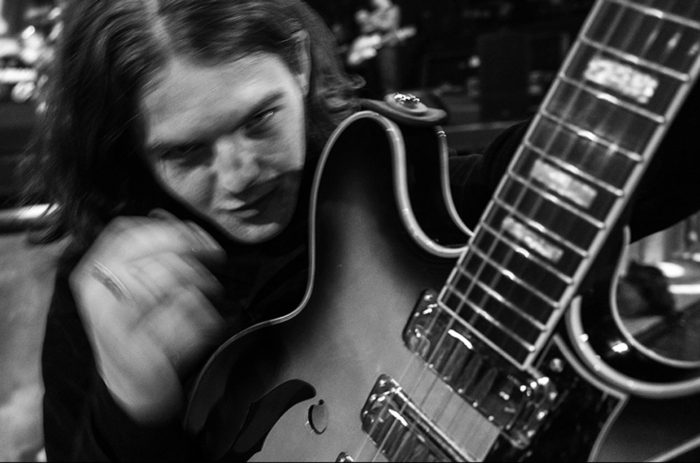 Avalanche Party followed on the downstairs stage with their own brand of anthemic garage rock, Iggy-style brooding in parts. 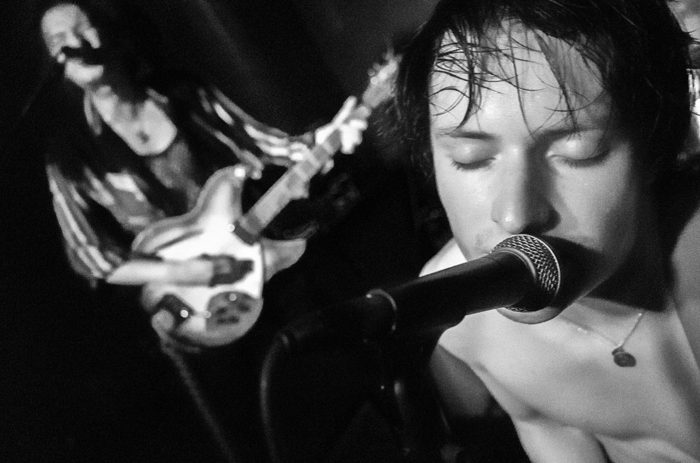 Pins, now augmented by Abbi from Esper Scout were up next in the main hall. The King Gizzard style twin drumming adding a huge sledgehammer synchronised punch to the band, especially on Bad Thing where the track seemed to just roll from the stage. There was no let-up with the much talked about Witch Fever kicking into gear downstairs. A blast of hot & sweaty screeching punk to whet the appetite before the headliners took to the main stage.

Cabbage are a band without compromise. Bursting on to the scene just over two years ago in a blaze of incendiary full-on punk tracks; funny, jaunty and uncivilised. Uber Capitalist Death Trade and Kevin took us deep into punk-Lydon territory whilst band favourite Necroflat In The Palace immersed us into the arena of the filthy and politically corrupt.
It would have been easy to junk these earlier tracks in favour new album, Nihilistic Glamour Shots, (as they did at The Art Gallery to showcase the new release) but what we got was a proper mash up of new and old. Designed to please the ardent fans as well as introducing the newer direction without losing them along the way. The perfect way to drop fresh stuff on to a baying audience!
Lee and Eoghan wore Love Music Hate Racism T-shirts, a movement which is gathering pace in Manchester with support from Uber fan John Hall and his team (Join them here: https://www.lovemusichateracism.com/).

Thomas from The Blinders joined the band on stage playing acoustic guitar on Exhibit A with extended rant by Joe and Perdorabo followed in slower vein with Lee conducting the audience in a clap-along before the track ended in a crescendo of noise. 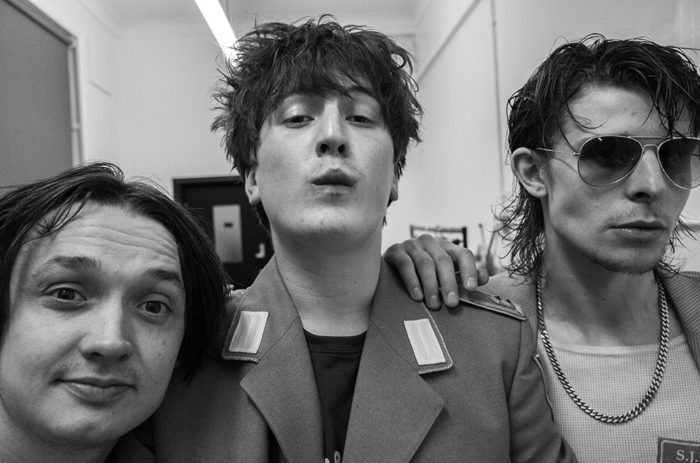 Kevin, the first song we ever heard by the band made a welcome appearance with Lee thrashing around on stage and jumping into the crowd!
Three balaclava’d terrorists in camouflage gear (The synthesiser sisters – I suspect it was The Blinders!) arrived menacingly on stage and proceeded to sway along like yer mum to Abba, to Terrorist Synthesiser, with its singalong-a-chorus. The intensity of Reptile State Funeral off the new album was broken by Necroflat and everyone had a big smile on their face; in fact, the song virtually sang itself such was the roar from the crowd!

It was a cracking performance and a brilliant day for Cabbage, a perfectly curated event which saw some amazing bands who complemented each others perfectly. Some spoke of poor sound during the final set, but I think it was more down to where you positioned yourself. Every hall is different, and it sounded great to me! Long live Cabbage and watch out for our interview with the band conducted before the show!

Black and White photos by David Gleave. Thomas from The Blinders, Avalanche Party & 3/5ths of cabbage! More of Dave’s photos on Louder Than War can be found here. He’s on Instagram and his personal website is  davidgleavephoto.com.

Main Pic Melanie Smith. More work by Mel on Louder Than War can be found at her author’s archive. You can find her on Facebook and Twitter. Photography portfolio can be found here:mudkissphotography.co.uk.