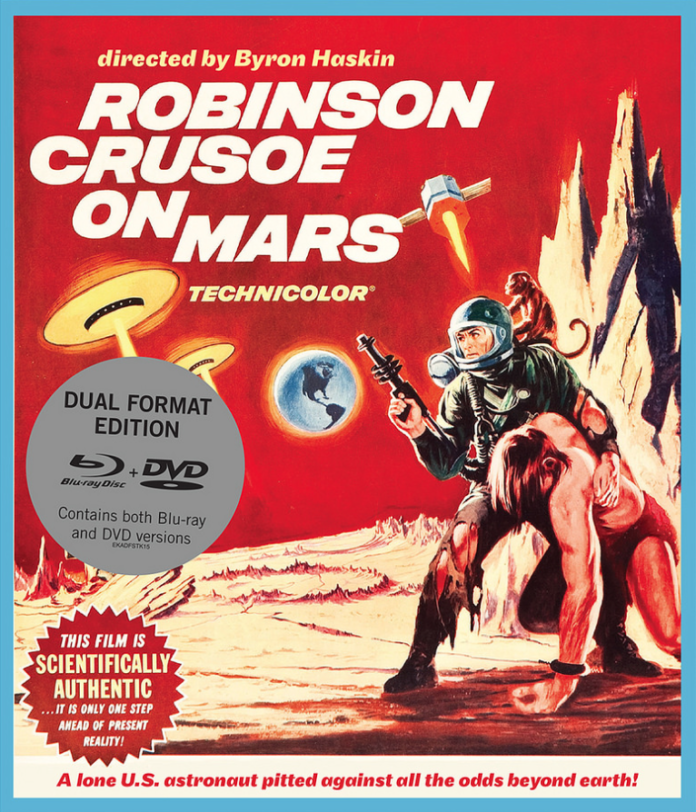 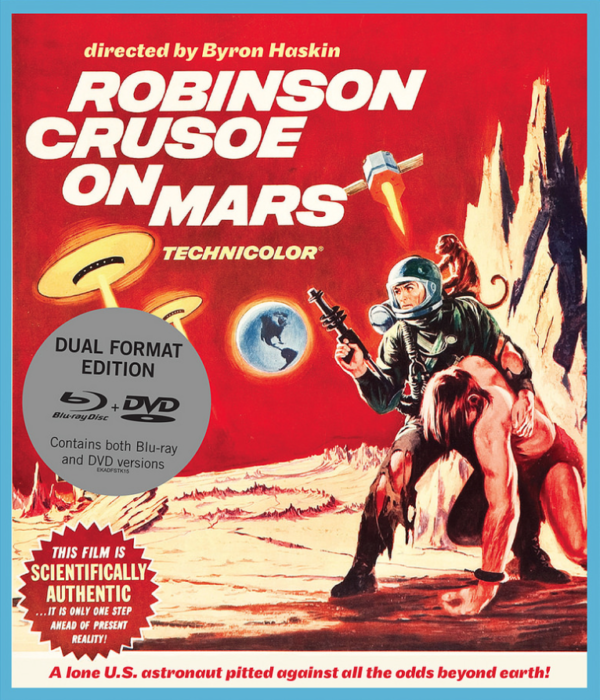 A few months ago I went along to see the highly praised blockbuster The Martian, which I enjoyed, even though I thought it was overlong and that the 3D was for the most part entirely unnecessary. Just before watching it I discovered that the science behind the film was in places far from accurate, chiefly the storm wreaking the amount of havoc that Ridley Scott presented in the film would be impossible on the Red Planet, hence the Mark Watney character played by Matt Damon would never have been stranded in the way he was. At no point, though, did my viewing pleasure of the film suffer because of this.

Robinson Crusoe on Mars is in many ways like The Martian of its time and it begins with the information that: ‘This film is scientifically authentic – it is only one step ahead of present reality.’

Of course, this isn’t really true but likely helped sell the film to some sci-fi fans in 1964. And to be fair it probably was reasonably convincing at the time, for example, the modular landing system was a brand spanking new piece of technology then and while the idea of any astronaut swimming in a pool of water on this particular planet isn’t something I would like to wager money on, NASA did recently confirm that liquid water does flow intermittently on Mars.

Like Mark Watney in The Martian, Kit Draper (Paul Mantee) is an American astronaut left stranded on Mars who must discover ways to somehow survive in a desolate environment with only a million to one hope of ever being rescued.

There is only a very limited supply of food rations and only enough oxygen to last for sixty hours. Initially there appears to be no source of heat, no water, no shelter, and no other life on Mars let alone sailors fighting in any dance hall or lawmen beating up the wrong guy. 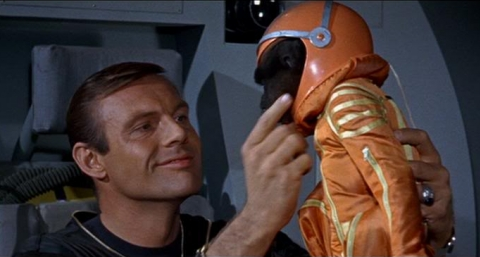 But, of course, Draper isn’t really as alone as he first guessed and I’m not talking here about his pet monkey, Mona. Well, the movie title gives that one away, doesn’t it? Just as in the Daniel Defoe novel, his path crosses with a man he names Friday, although rather than a prisoner about to become a meal for some cannibals, this Friday is an escaped alien slave who has worked as a miner for the benefit of a neighbouring planet.

Shot in Techniscope, the restoration of this cult movie looks fantastic, especially the scenes shot in Death Valley in California, a perfect choice for an extraterrestrial location with its with jagged cliff faces and deep craters. Interestingly, at the time of filming there were no available photos of the surface of Mars and now that there are, the similarities are clearly evident.

Yes, in an age where CGI is an industry standard, Robinson Crusoe on Mars inevitably looks dated and often rather B-movie. Some might argue that the occasionally ropey special effects are part of the movie’s charm in an Ed Wood kind of way.

On the not so charming side is the fact that our hero naturally assumes that his new companion should be subservient to him. ‘I’m the boss and remember that’, he tells Friday and he insists on him learning English, while making only a minimal attempt to learn the other man’s language himself. He even calls Friday an idiot at one point for his lack of linguistic progress.

Some of the plot devices are weak too, such as Friday’s convenient supplies of oxygen pills, and Mona leading Kit to water and a sausage like foodstuff that grows in pools which is edible enough even though it ‘could do with some paprika’ but at times it did strike me as psychologically more realistic than The Martian. Draper suffers a panic attack brought on by a lack of oxygen and, despite spending time in an isolation chamber, he still hallucinates about meeting back up with his former astronaut buddy, Dan McReady, played by Adam West of Batman and Family Guy fame.

Byron Haskin, who will remain best known for The War of the Worlds (1953), certainly handles his material well and knows how to keep viewers involved in his story. Just bear in mind some suspension of disbelief may be required and, like me, you will probably find this a surprisingly enjoyable watch.

This Eureka Entertainment release of the film is the first time that it has been available in a Dual Format edition in the UK. Extras include a new audio commentary with special effects designer and Robinson Crusoe on Mars historian, Robert Skotak; the original theatrical trailer and a 28 page booklet featuring a new essay by author Paul McAuley, as well as rare archival imagery.

For more info on the film please go here.