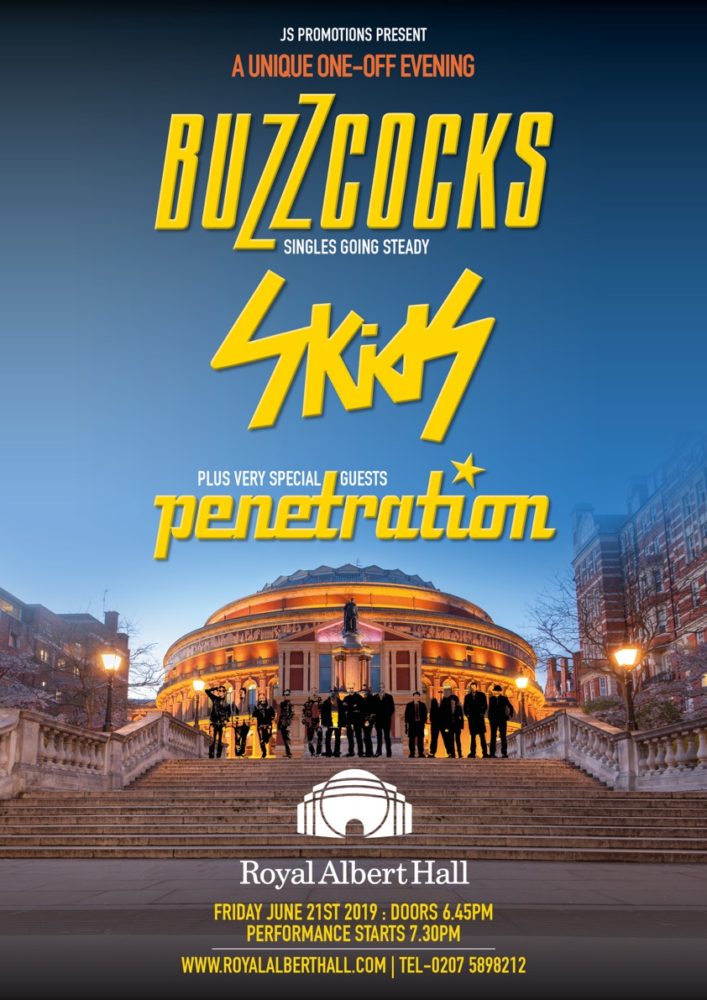 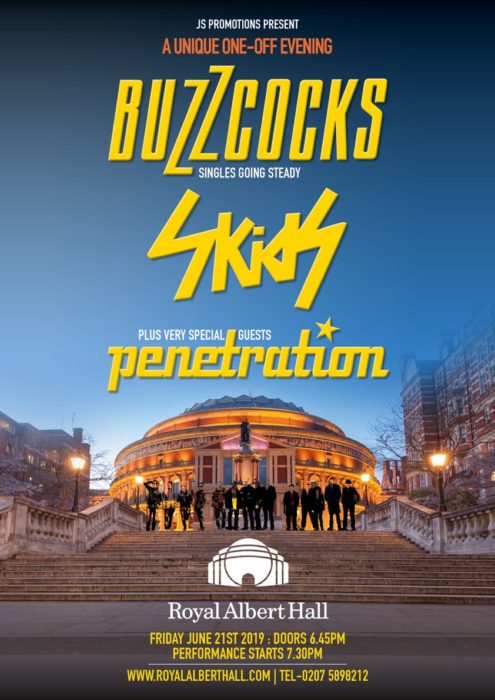 Louder Then War are delighted to exclusively break the news of a rather unique one-off evening;

On Friday 21st June 2019 Buzzcocks, Skids & Penetration will all appear in the grandiose surroundings of The Royal Albert Hall, the venue is delighted to present a one-off evening featuring the three pioneering bands from the first generation of punk and new wave.

Having hosted a highly successful sell-out concert by The Damned in 2016 which attracted a new audience to the venue, the Royal Albert Hall were enthusiastic to host other bands from what is now recognised as one of UK music’s halcyon periods.

Buzzcocks formed in Manchester in February 1976 and booked the Sex Pistols for their first northern gig in the city on 20th July 1976, later that year they became the first punk band to start their own label; New Hormones and released the now legendary and seminal Spiral Scratch EP.

The Skids were formed in Dunfermline in the summer of 1977 by the legendary guitarist Stuart Adamson who soon recruited the enigmatic frontman Richard Jobson. They took the unusual step of starting their own label and in February 1978 released the Charles EP on No-Bad and were quickly snapped up by Virgin Records. Numerous chart singles followed including Into The Valley, The Saints Are Coming and Working For The Yankee Dollar and they had two Top 20 albums: Scared To Dance and The Absolute Game. There were occasional reunions, but in 2017 they reformed, toured extensively (LTW Review Liverpool June 2018) and released the critically acclaimed album Burning Cities which reached No. 2 in the national album charts.

Penetration formed in Ferryhill in County Durham 1976 and were unusual in not that they were the north-east’s first punk band, but that they were female-fronted. In 1977 they signed to Virgin Records and released the classic single Don’t Dictate and a year later their debut album Moving Targets which reached No. 22 in the national album charts. The band toured USA extensively before releasing in September 1979 their follow-up album Coming Up For Air. They split soon after but reformed in 2002 and in 2015 released the hugely successful Resolution album.

Each band will be performing something special for what promises to be a unique evening in a memorable setting.

For ticket details head to the Royal Albert Hall website.