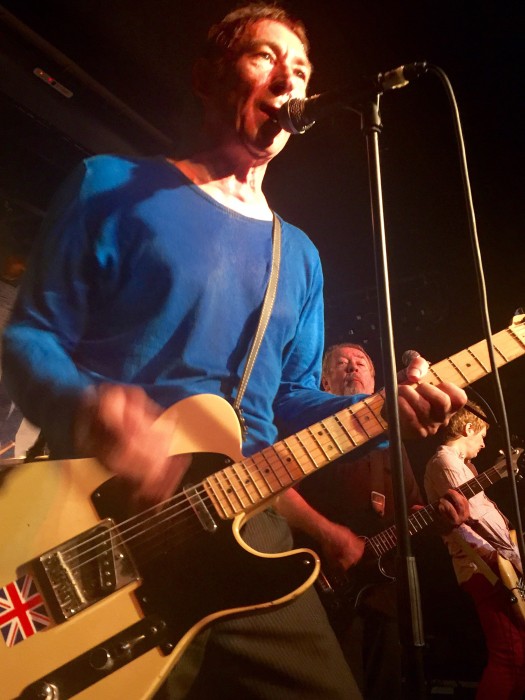 What Did I Get? A classic and charismatic performance from the punk veterans.

One year shy of their 40th anniversary Buzzcocks are out on the road once more promoting their ninth studio album ‘The Way’. The tour has just commenced in the UK, travels overseas to Spain, Canada, and the U.S, returning back to UK for more dates through till November.

‘The Way’ album released last year on 1-2-3-4 Records via Universal and is their first release since ‘Flat-Pack Philosophy’ of 2006. Since joining the band in 2008, this is the first outing for bass player Chris Remington and drummer Danny Farrant on a Buzzcocks album. The latest offering is still to a large extent a punk rock, power pop pleaser, nevertheless I hear tracks on ‘The Way’ that would genuinely gratify fans of Paul Weller, The Who and yes all things mod. It’s mostly evident on the tracks that Steve Diggle performs the main vocal on. I’m also going to stick my neck out here and say that the cover artwork is the best I’ve ever seen on a Buzzcocks sleeve to this day. I truly admire the simplicity of the band in monochrome silhouettes against a white washed brick wall and the blue Buzzcocks spray painted logo adding a splash of colour to the mix, evocative of Channel 4’s ‘The Inbetweeners’ series intro.

Before the show started I took position at the front and overheard a guy in a Buzzcocks sprayed jacket ask two guys in Buzzcocks t-shirts “Do you still think we will be doing this in 10 years time?” Both nodded and agreed unanimously that yes indeed they would be. He then said every time he comes it feels like the first time, obviously my brain went down a smut cul-de-sac, however on a more serious note the guy made a valid point. Each time I’ve seen a Buzzcocks gig they rock the stage like an new excited adolescent band, not going through the motions of another gig as so many do, giving it 110% to please and captivate their audience.

From the moment they came on stage opening with ‘Boredom’ from their debut self financed ‘Spiral Scratch EP’ the adrenalin kicked in and they tore through the set list of each three minute masterpiece like a power drill in full speed with a seemingly everlasting battery pack! By the time they got into the third song ‘I Don’t Mind’ the inevitable mosh-pit had formed, Steve Diggle contorted his face, giving that Fender Telecaster some windmill strum whilst somehow finding the odd split second to fist bump the punters before returning the fret board, then holding his guitar aloft with some serious punk rock attitude.

Buzzcocks are quite simply a joy to watch, Pete Shelley is the front man of the band, though the reality is you get two outstanding front men for the price of one. In fact Steve Diggle has a magnetic charisma that often detracts your attention from the rest of the band. He’s almost like a wild dog on heat that’s been chained up all-day and then let loose for an hour on the audience to shag your leg!

Amongst their arsenal of superb Buzzcocks ditties performed such as ‘Promises’, ‘Noise Annoys’, ‘What Do I Get?’ and ‘Autonomy’ they managed to pack in seven tracks from the new album. All seven songs were well received by the packed out crowd especially ‘Chasing Rainbows/Modern Times and ‘It’s Not You’ a great single with a gritty chugging bass line that becomes infectious when it gets to the middle eight, isolating the bass guitar before the band kick back into the chorus to finish.

Usually of late it would seem to be the case that most gig attendees turn up just to hear the best of an artist and quite often ignorantly talk during new material. This I’m pleased to say was not the case during this Buzzcocks gig; they had the audience full concentration from beginning to end.

After ‘What Do I Get’ they left the stage and came back on for the encore adding the brilliant moderately Jam/Weller sounding ‘In The Back’ from ‘The Way’ to the original intended set list (See photo). The moshing at the front became more riotous as the band belted out ‘Harmony In My Head’, ‘Ever Fallen In Love’ and climaxing with ‘Orgasm Addict’. (See what I did there?).

Never mind the Buzzcocks? How about never mind anything else and go see the Buzzcocks on this tour, they are true punk survivors with a vintage that only seems to get better with age!

All words by David J Harris, find his Louder Than War archive here.