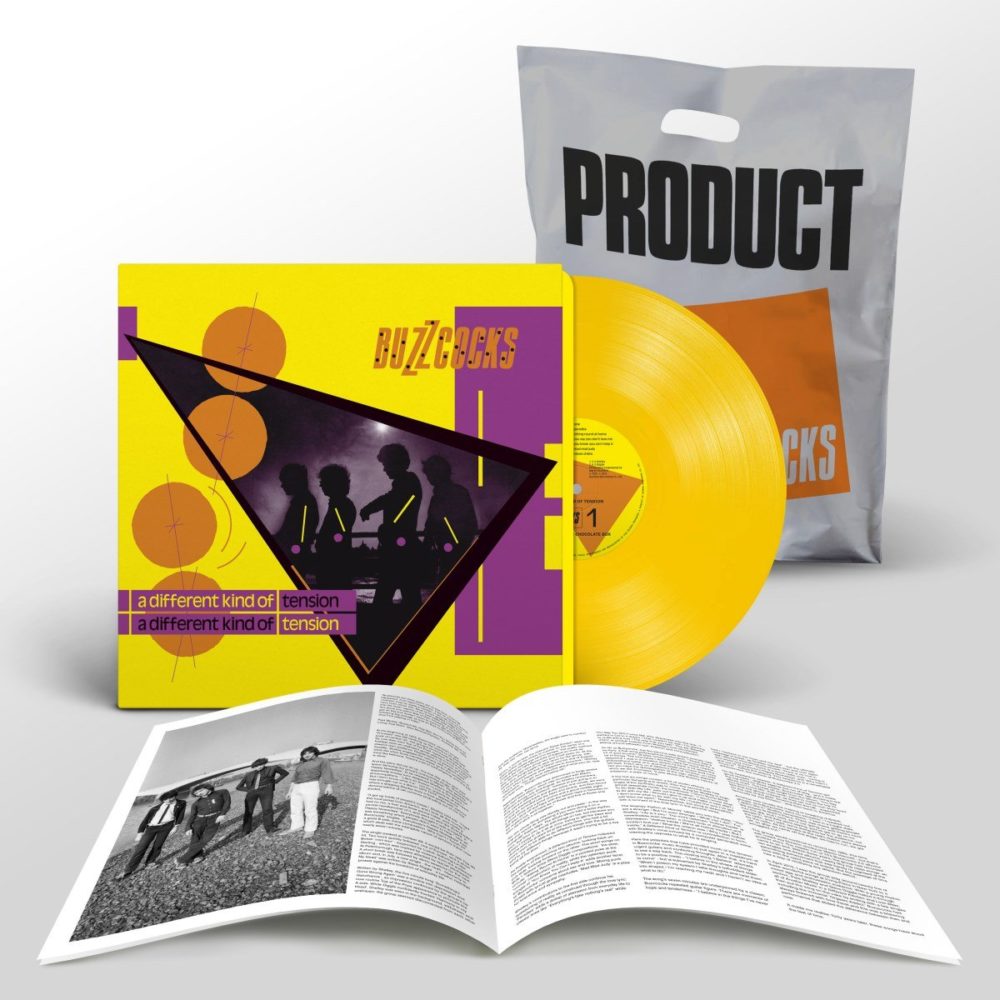 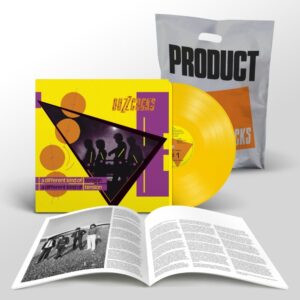 Reissued a week ago – two definitive albums originally released in 1979 by the influential Manchester band who only now seem fully appreciated by the music media and public at large following the death of singer/lyricist Pete Shelley. The Secret Public (the bands fan-club) knew they were godlike geniuses all along, says Ged Babey.

When asked ‘who’s your favourite band?’ by the kind of person who asks such questions,  historically, I always used to say ‘Buzzcocks’.

There are of course three different era’s of Buzzcocks:

1976/77 – the Spiral Scratch/|Times Up, Howard Devoto fronted Buzzcocks who invented D-I-Y Independent Record Labels in the UK. They set Dostoevsky to scratchy, frantic, one-take punk rock and split so Howard could catch his breath.

(And of course, under discussion here…) 1977-81 – The Classic Line Up, World-beating, Hit-making, ‘Perfect Pop’ Buzzcocks – Shelley/Diggle/Garvey/Maher. Arguably, the best thing to come out of ‘punk rock’ full stop – or in terms of timelessness, innovation and originality within the format, not to mention commercial viability.

So… A Different Kind of Tension and Singles Going Steady…

I have lived with and loved these albums for forty, yes forty, fucking years now and know every second of them… intimately. I can’t imagine how many times I have played them. ( And I am not saying I’m alone in this -EVERY Buzzcocks fanatic in their mid-50’s would say the same!). Whether solitary listening, at a party, in the car… it’s a guaranteed buzz.  Perfection + nostalgia + timelessness.  Songs about love and sex and life and belief… confusion and self-doubt.

(From memory, i haven’t fact-checked this…) Joey Ramone said that Singles Going Steady was his all-time favourite album and Poly Styrene was a huge admirer of Buzzcocks.  Enough said.

The influence of Krautrock on Buzzcocks as a vital element and signpost to the future, post-punk (Discuss)

Buzzcocks always seemed underdogs, compared to the Clash, the Jam and the Pistols.

Buzzcocks to my mind were never the ‘Punk Beatles’ that some labelled them.

Buzzcocks always seemed unprepared for the fact that in 1978/79 they were the ‘best band in the world’.  As if it all happened by accident, by chance.

(This is getting a bit random thoughts and Paul Morley-ish, Apologies)

There is no need to ‘review’ these albums because, surely, anyone and everyone with any interest in punk, pop, Manchester music and so on, already owns them….

So – the Domino re-remasters ( I’m sure they were remastered before..)  I listened intently, and yes, for once there is a distinctly noticeable difference. You can improve on perfection  There is more ‘separation’ between instruments. The guitars sound sharper and the whole sound is wider ….  The bass and drums sound fucking phenomenal – but they always did.

Steve Garvey is the unsung hero on A Different Kind Of  Tension  – his bass lines and playing, particularly on side two is amazing.  Maher is too – but always was from Day One.   Buzzcocks was a band of equals technically.  Shelleys voice was a slightly camp, quavering anomaly which gave them a distinct identity- a kind of flawed perfection.  His lyrics gave the band it’s soul.  Steve Diggle always had an important part to play – counter-balancing Shelleys frustrated romanticism with some realism.  It became increasingly apparent though that he didn’t want to play second-fiddle.  Autonomy remains his finest moment.  But he seemed to yearn to be in the Clash or the Jam rather than the band he was part of from the start.

On Side One , Diggles songs seem to me to be attempts to go for a Beatles -particularly Abbey Road sound, Sitting Round at Home and Mad, Mad Judy are enjoyable enough songs but You Know You Can’t Help It asserts his heterosexually so obviously – to distance himself from bisexual Shelleys gender-neutrality- that it’s embarrassing.  Shelley seems to have a dig back in Raison D’etre addressing the ‘boy’ in the lyric.

Side Two is Shelleys finest work – Money/ Hollow inside/ the title track and the emotional epic I Believe – are almost a concept album within an album.  Side One was business as usual and a tussle for dominance between Shelley & Diggle in a way but A Different Kind of Tension Side Two was Shelley becoming the poet-philosopher-artist he had grown into being. Self analysis and introspection becoming an unmatched post-punk song-song cycle –  everything which the over-praised Unknown Pleasures is claimed to be.

Singles Going Steady is just chronological hit after hit: Orgasm Addict -wickedly funny punk filth from Devoto’s fevered fantasies which was never gonna get on the radio.    What Do I Get sublime simplicity -frustrated self-pity turned into a song the Buzzcocks management wanted to get Shirley Bassey to sing. I Don’t Mind -teenage longing personified with that needling guitar sound.  Love You More,  a barbed love song with blood and razors in amongst the devotion.  Then the Big Hit – which contrarily I never much cared for! Promises was far superior and definitive stuff. Maher at his absolute best -matching Clem Burkes skill and ability. Everybody’s Happy Nowadays seemed a bit of a disappointment at the time – rescued by Orwell being the inspiration for the lyric – but makes more sense in retrospect. Harmony in My Head in its original form is an absolute classic and along with Autonomy, earns Steve Diggle his place in the punk-hall of fame alone.

The B-sides tell an alternative story – the two co-credited to Dial (Garth or Richard Boon?) – Whatever Happened To and Just Lust have a distinct post-modern angle and knowing smartness..  Why Can’t I Touch It?  has a remarkable groove and should end the collection in fine style were it not for the only mis-fire on the compilation – the terrible ‘Something’s Gone Wrong Again’ -Shelleys only clunker of a song.

Oh Shit and Noise Annoys are every 13 year old punk-rockers favourites and take me right back to the day I bought them, playing them endlessly on repeat when my parents were out.

It’s impossible for me to be objective about these albums because of the huge emotional investment and history I have with them being central to the music of my life.  They are the benchmark I use subconsciously and consciously against which to judge all music since.

I never met Pete Shelley as I didn’t want to be disappointed that he didn’t live up to being the genius I had built him up to be in my mind.   By all accounts he was a sweet man. A modest, unassuming chap.  But a genius all the same who produced his best work with team Buzzcocks. The Secret Public of fans will miss him – but he will always be with us in the grooves of these immaculately conceived but beautiful flawed and all-too-human records which chart his and all of our loves and lives, heartbreaks and beliefs.

The essence of being, these feelings I’m feeling, I just want them to last 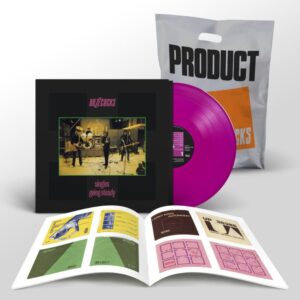 Buzzcocks and Friends and contemporaries play the Royal Albert Hall tonight (Friday 21st May 2019) as a celebration of Pete Shelleys life and music.