Buzzcocks: Another Music In A Different Kitchen / Love Bites 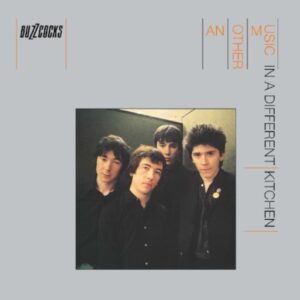 How different, how sad it is editing these words, first written just a few weeks ago; the shock of Pete Shelley’s death still there. The pain will linger on but the music – oh, that music – will never die. And it’s not being sentimental to say it’s never sounded better.

Has it really been 40 years? Terrifying for those of us who spent their youth jumping around to these songs in a sea of phlegm and rebellion, but the good news is that the first two Buzzcocks albums sound as fresh and vital today as they did back then in 1978.

Bursting out of the speakers like a sugar rush, debut Another Music In A Different Kitchen sounds even more like what it sounded like then: an unbroken string of hit singles. Of all the Class of ’76, Buzzcocks were the most like an old-fashioned Singles Band in the spirit of Glam greats like T.Rex, Slade and Sweet.

By the time they released their debut album in March 1978, they had already given us Boredom (from the seminal Spiral Scratch EP) and the peerless double-whammy of the equally seminal (pun fully intended) Orgasm Addict and What Do I Get. The fact that none of them were hits merely demonstrates that the British public has never had any taste.

It would be another six months before the band enjoyed their biggest hit when Ever Fallen In Love (With Someone You Shouldn’t’ve) reached the giddy heights of No.12. Which still seems an absurdly low position, given the sheer singalongability of pretty much every tune on an album brimming with an addictive pop sheen that was entirely absent from most of their punk peers at the time.

Back then it was pure punk; listening back now, it’s more obviously the template for what would become pop-punk, but there is a bite (a love bite?) beneath the smooth surface. As our own John Robb put it in his heartfelt encomium here: “Pete Shelley was the poet laureate of punk with those genius lovelorn lyrics, effortlessly brilliant melodies, artful smarts and sexually fluid love songs as challenging and inspiring as any snarling manifesto.”

Sandwiched by a snatch of the two-note guitar solo from Boredom, Another Music In A Different Kitchen marries a melodic Sixties pop sensibility to Steve Diggle’s buzzsaw guitars and the galloping rhythms of John Maher and Steve Garvey, with Shelley’s oddly gentle northern-accented vocal style a contrast to the gruff bellowing and sardonic sneering of most of his contemporaries.

Songs generally come in at under three minutes and are perfect examples of the pop song as an art form: short sharp verses followed by snappy choruses containing a melodic hook. The lyrics, meanwhile, are the stuff of teenage dreams – a gender-fluid fusion of sex and more sex – but without the filter and with added archness (you just didn’t expect a song called Fast Cars to have a chorus that goes: “I hate fast cars”), while Shelley’s sardonic tone, is as sharp as his acid tongue when it comes to bodily functions: Love Battery celebrates the “crazy current” in his underwear, while on You Tear Me Up he expresses sheer disgust: “All this slurping and sucking, it’s putting me off my food.”

The odd track out from this popfest is the closing Moving Away From The Pulsebeat, a trance-like seven-minute epic whose motorik rhythms and circular guitar figures tip their hat to Shelley’s love of Krautrock (especially Can) and hint at the further experimentation to come on subsequent albums Love Bites and A Different Kind Of Tension, not to mention Shelley’s solo efforts such as Homosapiens.

Recorded at Olympic Studios in London between December 1977 and January 1978 with producer Martin Rushent’s crystal-clear production finding just the right balance between primal power and sweet melody, Another Music In A Different Kitchen was released, wrapped in a silver plastic bag ironically labelled ‘Some Product’, in March 1978. 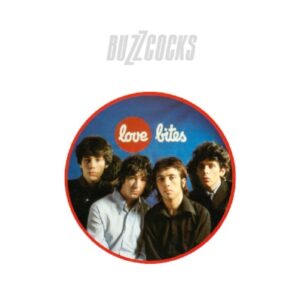 Just six months later, Love Bites arrived. Recorded once again with Martin Rushent at Olympic Studios in late July 1978, and reeased in September of that year, it reached number 13 in the U.K. album charts and features their highest charting single, the timeless Ever Fallen In Love (With Someone You Shouldn’t’ve). It also finds them expanding their sound without losing their USP – or ESP, to name the title of the centrepiece built around Diggle’s addictively repetitive guitar melody – into areas previously uncharted by UK punk bands.

The songs come at you in rapid succession, bathing you in pleasure: Real World, Ever Fallen In Love, Operator’s Manual, Nostalgia, pure pop wrapped in pure punk minimalism; then the melody takes a back seat to the frantic  thrash of Just Lust (written with band manager Richard Boon) and its memorable retort to Malcolm McLaren: “If passion is a fashion, then emotion is a curse”. There’s also a vocal debut for Diggle, who takes the microphone for the semi-acoustic Love Is Lies: to be harsh but fair, it demonstrates why Shelley is the lead singer in much the same way Keith Richards’ occasional forays to front of stage remind us that there’s a good reason why Mick Jagger is the Stones’ front man.

Nostalgia takes the previous album’s Pulsebeat a stage further, constructing another deliberately repetitive song around Shelley’s “constant feeling of nostalgia for an age yet to come”  (a lyrical nugget that’s just perfection) and there are two experimental instrumentals that show a new side to the band: the solitary Garvey composition Walking Distance and the closing Late For The Train, which opens up into a kaleidoscope of psych-drenched Krautrock.

Lovingly restored and remastered from the original ¼” tapes for their 40th birthday and packaged in the original Malcolm Garrett-designed sleeves with lavish 8-page booklets containing unseen images and extensive liner notes by Jon Savage, both albums are also being released on deluxe 180g vinyl for the first time in many years… plastic bag and all.

• Another Music In A Different Kitchen will be available on Deluxe LP (REWIGLP126X), pressed on silver heavyweight 180g vinyl, Standard LP (REWIGLP126) and CD (REWIG126).

• Both Deluxe vinyl versions come with a recreation of Buzzcocks’ classic carrier bag and are available exclusively via indie retailers and Dom Mart.