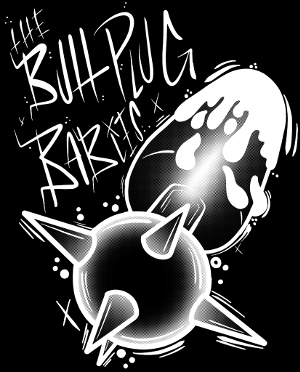 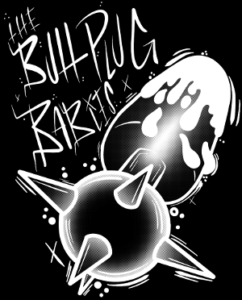 At a recent gig I played in Plymouth I had the opportunity to see local punkers Butt Plug Babies. The first thing that grabbed me was the fact that most of them were young but as evidenced by their attire – and attitude – they were punk as fuck. I’d noticed a crowd of young punks outside the venue adorned with studs and patches covering the whole gamut of punk rock and then they took to the stage. The old punk hiding under a baseball cap and behind the drums turned out to be the father of the bass player.

In a scene that is rapidly aging it was a pleasure to see a youthful assault on the audience and I was particularly struck by the capability of the guitarist. But the main takeaway? There was no posing, they were having fun and they were fun to watch. 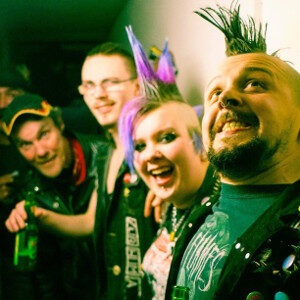 The promoter of the gig (Andrew from Chaos gigs) suggested they give me a CD as he often reads my writing for Louderthanwar. So a copy of their self released album Going in Dry was thrust into my hand. After telling them in no uncertain terms that I would NOT be searching Youtube for videos of “Butt plug babies” they sent me a link.

Butt Plug Babies like drinking beer, memes get on their nerves and to quote the band themselves they like “Takin’ the piss outta the things that anger us and havin’ a good laugh doing so!”. Wotsit Nazi is about the most serious this bunch get, and while the song has a limited shelf life (we hope) it’s still an amusing takedown of Trumpf.

They like a bit of nonsense. Pussy Domination has echoey guitar a la Dead Kennedys Holiday in Cambodia before jumping into a jerky stop start complaint about how our four legged feline friends are taking over. Puppy Revolution could pass for a genuine skinhead song complete with Oi Oi chorus and militaristic drum beat if it wasn’t for the puppy howls and the fact it is about about a canine uprising.

The lead vocals tend to a gruff demonic roar straight off the moor – with enthusiastic contributions from the rest of the band. The overall sound is mostly straight up punk drawing on the No Future and Riot City back catalogue with occasional forays into something less formulaic. Their take on ska-punk is as good as many of the bands who made this their sound in the 90s.  I notice something of Peter and the Test Tube Babies in the sound as well as attitude, and I guess it’s there in the name. This is most evident on Anxiously Depressed which has the space and melodics of slower Test Tubes stuff like Spirit of Keith Moon.

There is plenty of toilet humour and puerile swearing but with a name like Buttplug Babies were you expecting anything different?  If someone is taking the piss there is often the question “are they punching up or punching down?”. When the Butt Plug Babies aren’t punching up – their wordplay puts the C*** in conservative on Cont(servative) – they’re more likely to be punching themselves in the face. They are not afraid of making themselves the butt (sorry) of jokes opening their live performance with a song about the singer cutting his nether regions while trying to shave said sacred area. “I once tried to shave my balls, it didn’t go well at all”

Plymouth is unfortunately often left out of the itinerary for tours and many punk bands don’t make it further South West than Bristol, Exeter at a push. The commitment of Butt Plug Babies to the DIY approach to punk has led to members of the band being involved in organising the Plymouth Punx Picnic, bringing more bands to the area. For this alone they deserve some recognition, cos this can do attitude is what fuels punk.