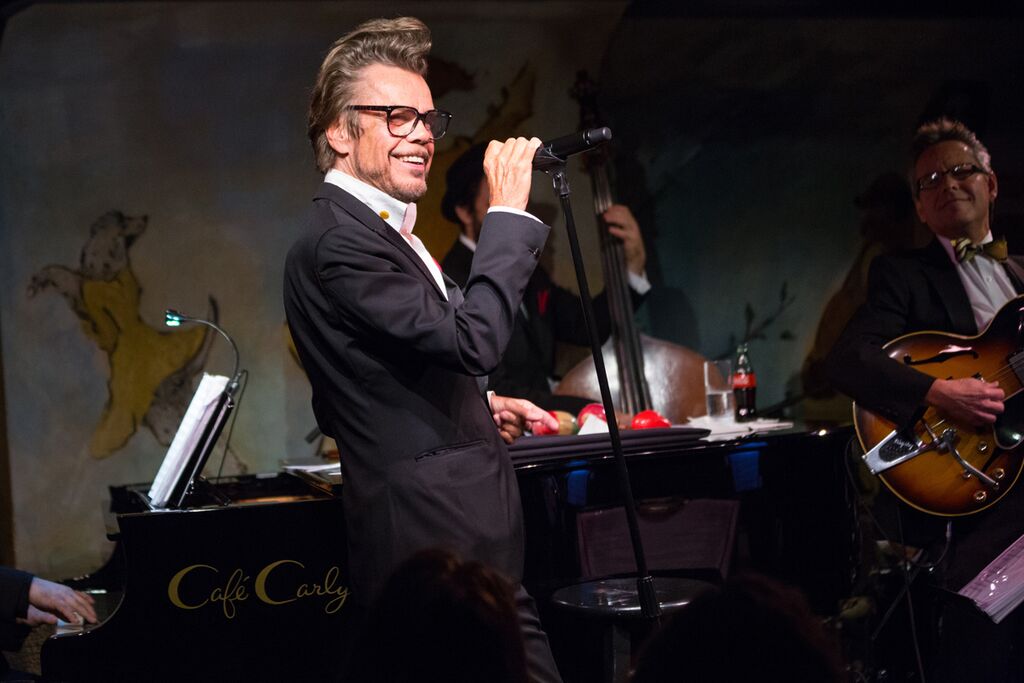 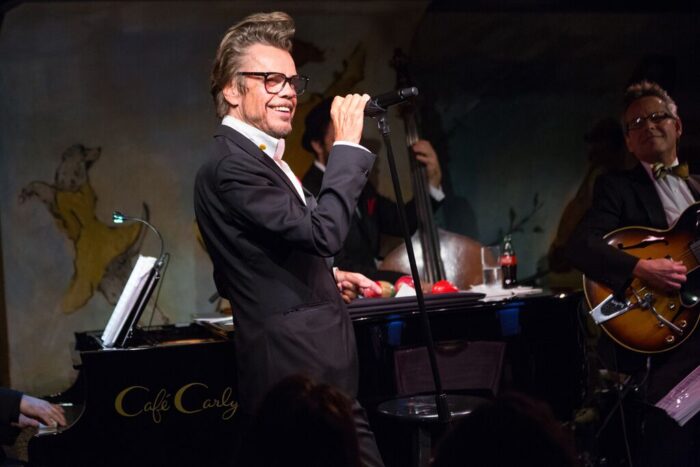 A far cry from the protopunk, glam rock lead singer and founder of The New York Dolls, David Johansen brings his celebrated Alter Ego, Buster Poindexter to the intimate stage of the elegant Cafe Carlyle.

Instead of yelling the words of “Personality Crisis”, into an angry mosh pit, his renditions of artists such as Eric Burdon, Janis Joplin, Neil Diamond, Frank Sinatra, with a splash of Broadway is being showcased in a Cabaret setting. With his hair still big and tall, his suit flashy- conservative, he ultimately, nevertheless owns that rock star attitude, in the best way possible.

Even if you fail to enjoy the music of Chet Baker, or Bobby Rydell, which I do not, you cannot deny the soulful and tantalizing voice of Poindexter, as he portrays the very quintessence of intimate Cabaret. The New York Dolls were undeniably one of the earliest punk, heavy metal bands to arrive on the scene, emerging in 1971. Way ahead of his time, Johansen dressed in full drag, wearing High Heels his face fully painted, and became a seminal force influencing artists and bands including Billy Idol, Guns and Roses, Adam Ant, The Ramones, The Smiths. The Sex Pistols, and countless others. Their first couple of albums became the most popular cult records in rock history. According to The Encyclopedia of Rock and Roll, The N.Y. Dolls predated the Punk and Glam movements and were  “one of the most influential rock bands of the last 20 years”.

More recently Poindexter is known for his hit singles Hot,Hot,Hot and Heart Of Gold. He has also appeared on Saturday Night Live and several films such as Car 54, and in Scrooged as the ghost of Christmas past. Poindexter performed various songs embracing the artistry of Cab Calloway, Clyde Otis, Jim Doris, Roddy McDowell, just to mention a small few, combined with his sense of humor, which is actually quite amusing. In a quote Poindexter explained “playing the Carlyle gives me an opportunity to perform some of the myriad of songs and musical styles that I love and to tell a few jokes. In the Coney Island of my mind, this is the show I’d like to see!”

In an interview I had with him earlier this year, I asked him if he ever imagined that The Dolls would be as influential to the history of rock as it was. He replied, ” Well I really don’t think about it, but if somebody would have mentioned that, that was going to happen, I really wouldn’t have been surprised!  I also asked him why he created his Alter Ego, Buster Poindexter, and to that he relied, “well there was a lot of songs I wanted to sing, but it was really hard for me to find a place to do so. So I feel like, well if I just changed my name, when people came to see Buster Poindexter,  they wouldn’t be screaming “Funky But Chic” or something like that. So I thought I would create this concept so I could sing whatever I felt like singing. You know if I did a David Johansen show or a New York Dolls show, you know your going to get those songs”.

He received numerous standing ovations to a sold out crowd and has a two week residency at the Cafe, until October 10th. The Carlyle is located at 35 East 76th Street in the heart of New York. I strongly recommend that if you are in the area stop by…you can secure reservations by calling 212-744-1600, or on line at www.ticketweb.com.