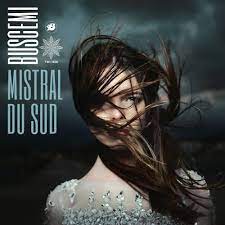 New 12 track album by Belgian DJ/producer Buscemi, otherwise known as Dirk Swartenbroekx, his ninth in total and the follow up to Luna Misteriosa. This LP was recorded during the current pandemic and guests on Mistral Du Sud include Keith Canvas, Tai and former Crass vocalist Steve Ignorant…Ian Canty wonders if he owes this a listen…

Buscemi, the Belgian DJ and producer also known as Dirk Swartenbroekx, has been pretty successful on his home country’s charts since debuting in 2001 with the album Our Girl In Havana. This new LP Mistral Du Sud, his ninth in total, finds him in collaboration with a wide range of vocalists. His expansive and finely chilled mix of house, lounge, electro styles and even the odd dash of jazz dance often results in some neat examples of thoroughly modern dance music on this collection and nothing featured here is anything less than a toe tapper.

That being said, let us get down specifics with regard to the contents of Mistral Du Sud (Southern Mistral when translated into English, apt given the weather has turned a touch cooler today). We begin with Not Gonna Make It, which features the voice of Keith Canvas. After a reflective preamble it kicks into lively percussion and has a decided jazz/funk flavour, which is all packed into a floor filling rhythm. Then the following offering, Lua Bonita, bounces along nicely after another ear catching intro. A real electro groover in La Jungle very much enhanced by an icy cool vocal from Lauvé – it might slows the beat down a little, but this tune is pure gold and the performance mesmerising.

Who’s Gonna Save Me? is a busy, upbeat slice of house/dance that includes a little old school style hip hop via a rap from TLP and is followed by Taxi Driver, which has also been released as a single. This number has a memorable rhythmic pattern and refrain, playing smoothly off a female spoken voice and male singing, plus using instrumental drop out effectively. Jokomo features on the jazz electro of O Verão Chegou and this is based around a simple repeated keyboard figure and stomping percussion beats, which all work really well.

I know the people who read Louder Than War will probably be most interested in the seventh track in this selection, the Steve Ignorant-voiced Who D’You Think You’re Talking To?. I’m pleased to report that it is very good, Steve’s very much the renaissance man and his Midas touch continues all the way to the glitterball. The juxtaposition of upfront electronic drumbeats and his unmistakable, impassioned vocal (which is given an unusual echo effect here), mesh together like a dream. The propulsive and percussive rhythm and synth moves work a treat as the paranoid lyrical stance vividly portrays an increasingly claustrophobic world. The presumably intentional double negative “there ain’t no escape” is an acute sign of the hopelessness one feels with the turmoil of the world at present and it concludes in a howl of frustration “I wanna scream, you’re stifling me”. This is one of the best tracks of the year so far in my view.

I Met The Devil lightens things, a bright and stylish modern disco melody with only the wavering synth drones offering signs more ominous. La Bella Rose, featuring Luigi Catalano, is possibly the most pop moment on the LP, with a great big beat that asserts itself over a balalaika (I think). Tai, who also sang on Lua Bonita, returns on the delectable light touch of Labios De Mel and Heartbreaker, which has some fine vocals from Wilma Jane, could be the ultimate electronica torch song. If you are looking for a common reference point, I would say it starts off a little like the 1994 single Seven Seconds by Youssou N’Dour and Neneh Cherry, before wending its way to something wholly of its own.

The album finishes with the title track, where synth drones, quickfire drums and bass motor all along. A hoarse voice sounds both weary and resilient at the same time, before organ and accordion are thrust in there and then the beat returns in earnest, before sadly dying away.

Mistral Du Sud is really very good, a dance-orientated album which has depth and is consistently entertaining and interesting. A riot of sound and ideas really. It also comes built with well-constructed grooves that could even get a very poor exponent of dance like myself wanting to get moving. Buscemi continues to dodge in and out of the mainstream, he’s clearly a sharp character with a pronounced ear for the unusual. I don’t profess to being an expert on what makes modern dance music click, I’m too old, but I know a good beat when I hear it and there are many of them included on this record.