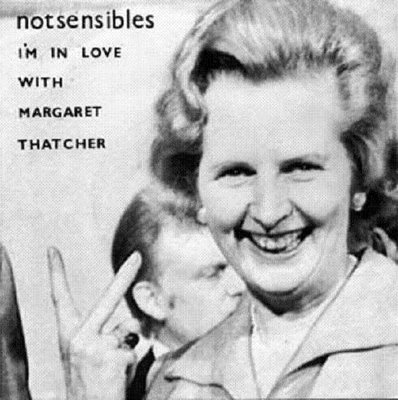 The Notsensibles ironic 1980 pisstake punk anthem ‘I’m In Love With Margaret Thatcher’ has been included within the soundtrack of the first big film of the year – the biopic of Margaret Thatcher, ‘Iron Lady’ starring Meryl Streep.

The Burnley punk band, a Peel favourite, had many similar funny and pithy songs… The ‘I’m In Love with Margaret Thatcher’ was issued to ‘celebrate’ her election victory – initially self released (Redball Records) in a pressing run of just 1000, however following the attention from John Peel the single was licenced to Snotty Snail Records, and went on to shift approaching 10,000 copies. The ‘B’ side was the equally sublime ‘Gary Bushell’s band Of The Week’ which took a gentle pop at the Oi! journalist.