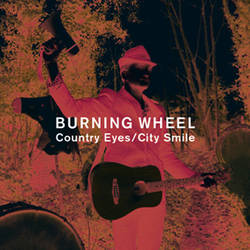 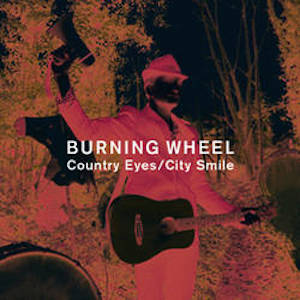 Burning Wheel released a great little EP at the end of last year which somehow slipped under our radar at the time. Fortunately for us though Bryony Hegarty’s on the ball enough to have caught it, so here she belatedly reviews it for us.

Billing themselves as ‘a high-octane blend of Irish folk, Mersey
melodica, and postrock noise’, Burning Wheel’s 4 track EP Country Eyes / City Smile was recently released on Rough Trade, Limited Edition 10” vinyl, and is produced by Gerry Diver ( renowned for his work with Lisa Knapp and on the Mercury nominated Sam Lee Album Ground of its own.

Irish Liverpuddlian Eoin Quiery, who goes by the moniker Burning Wheel, has released a 4 track EP Country Eyes / City Smile on Rough Trade. The recording is produced by Gerry Diver, renowned for his work with Lisa Knapp and on the Mercury nominated Sam Lee Album Ground of its Own and for his Speech Project album featuring spoken word recordings from Irish artists including Shane MacGowan, Christy Moore, Damien Dempsey and Martin Hayes. Quiery and Diver met on the London Irish music scene and what began as a one-track collaboration blossomed into a bigger project.

The EP opens with ‘Land of the Free’; a poignant lament evoking 1920’s Belfast shipyard workers and Quiery’s ancestry in the story of his great uncle’s journey to America. Nuanced radio wave messaging and snatched speech transition into traditional instrumentation and poetic reflections, capturing both a sense of displacement and the quest for a new beginning.

Lead single ‘Get There’ is an electronica pop take (hints of a jaded view) on musical quests, with driving beats and catchy lyrics that indulge quirky wordplay. Anecdotally it repeats advice passed on from Marvin Gaye to Franke Pharoah (sometime backing singer to Burning Wheel).

For the title track ‘Country Eyes/City Smile’ Wednesday Gray joins on vocals in a duet that articulates the full blend of styles and inspirations Burning Wheel brings to the turntable. Including shades of the cowboy blues, the track has a considered pace, charting a love story in a transcending of barriers, before fading to expiration. Soulful tones from Gray juxtapose Quiery’s slated vocal.

Final track bittersweet ‘Waiting to Cry’, alludes lyrically to the Irish psyche, with instrumental interludes elaborating the sentiment of the song.

The EP is a short but sweet taste of Eoin Quiery’s colourful live shows and feels like a mature well-honed emergence of his Scouse folk beats. Band name Burning Wheel strongly hints at elements of Query’s performance art approach. He’s known for taking to the stage complete with musical props as well as instruments, including his trusty megaphone – a visual metaphor for the singer’s evolution as 21st C bard/protest-folkster?

All words by Bryony Hegarty. More writing by Bryony on Louder Than War can be found at her author’s archive.