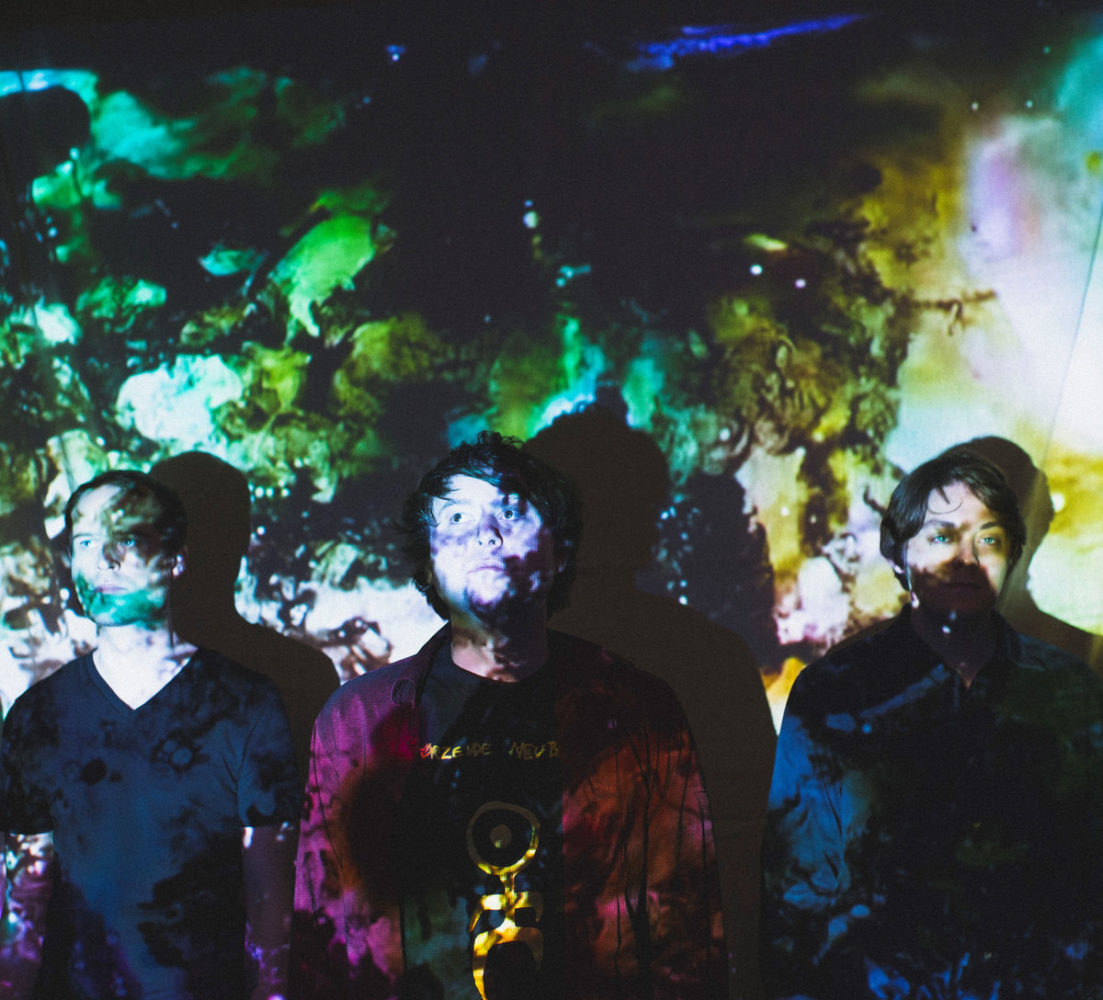 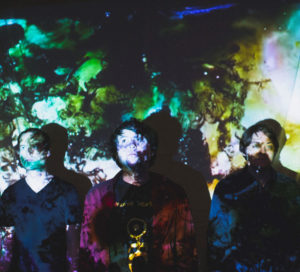 Peach explores that feeling of impermanence and precariousness when we allow ourselves to fuse with another, often at the expense of our own identity” vocalist and central figure Aaron Mills explains, “It also concerns the distant idea of happiness portrayed in holiday brochures and billboards, the kind that make happiness an impossible ideal.”

After gingerly approaching BBC 6Music’s indie doyen Steve Lamacq with a 4 track demo at the legendary Joiners, Southampton, Lamacq was so enthralled that Burning House were chosen to appear on 6 Music’s new bands line-up.

Their music also found its way into the ears of Wire’s Colin Newman, who found in them a sonic kinship. Subsequently Burning House were invited to open for Wire at the Con Club in Lewes. The trio’s euphoric sound has also led to shows all over the south-coast with Moon Duo, Shonen Knife, Is Bliss and Kagoule.

Peach by Burning House is self-released and was released on 8th June.

LTW: Can you tell me what the very first music you got into?

Aaron: My earliest musical memories are of my father playing Yes albums incessantly. From a young age I developed an appreciation for grandeur in music, and I would often find myself swept up in the studied commotion of it. I think this played a part in my fascination with ostentatious things and unconventional arrangements that I latterly heard in bands like Slint and Red House Painters.

How old would you have been?

It’s hazy, but I must have been around 5 or 6, but I was probably subjected to prog rock as soon as I left the womb!

The first serious band I got into were Blur. My father had ‘modern life is rubbish’ on cassette, which I swiftly fetched after seeing them wipe on the board at the Brit Awards in the mid 90s. I immediately fell in love with that album and still play it to this day. It’s a fantastic pop record. And sets a great template for the ‘album’ as an art form. It’s a tremendous distillation of British Pop: The Kinks, Bowie, XTC, The Smiths, but with Graham Coxon providing American Jazz motifs and noise rock a la Dinosaur Jr/ Sonic Youth. After that obsession came groups like Radiohead, Smashing Pumpkins, and from there, Swans, Sonic Youth and Aphex Twin were on heavy rotation.

When did you first start writing music?

As soon as I discovered the guitar was capable of making an unholy racket, I began the task of constructing songs. I realise now that I viewed it as a fundamentally rebellious act, and in some ways a ‘disturbing’ one that eschewed convention and uniformity.

How did you start the process of writing music?

I tried writing very simple songs, whose chords I probably lifted from blur, oasis and manics guitar tablature books. The wonderful thing about Pop is its nemonic/ nursery-rhyme quality. A melody can take you to play where nothing else can. It defies reason— its nature unquantifiable. The only goal in this initial foray was getting to the ‘end’ of a song by any means. It was an unconscious but nevertheless enjoyable process, wherein my childlike naivety was engaged in a fantasy derived from the pop scene at the time which was extraordinarily jingoist.

Who were your main musical influences at this time?

blur and Oasis and then later on came Manics, Radiohead and Smashing Pumpkins, which I’m sure my early ‘priming’ courtesy of bands like Yes, Rush et al.. prepared me for.

When and how did the band form?

The band probably came into fruition in 2013, but I had conceived of the idea of burning house long before that… it evolved from demos I made on my computer and a period of trying to work out how to create the most satisfying concoction of my preoccupations/influences.

Can you go into abit if historical detail about the band?

Most of our early output is lost in the annals of the internet… But this year is going to be furiously productive. We’ve been fortunate enough to share the stage with Moon Duo, Shonen Knife, The Chills, Cosmic Death and personal heroes: Wire.

You’ve just released a new single. Can you tell us abit about that?

The song ‘Peach’ was written in the same sessions as our Tracer EP, released back in February. We needed another song to put on the EP, and I kept returning to this guitar riff that really captured my imagination. All of a sudden all these infectious melodies emerged. I then recorded an acoustic demo, which I gave the band to listen to on the way to the session. They unanimously fell in love with it, declaring the song a “Gamechanger” I was initially thinking about Smashing Pumpkins ‘Zero EP’ — how they shove a Beatles-esque pop masterpiece like ‘Pennies’ at the end of the EP after 30 minutes of crushing Heavy Metal pomp. But I realised that it deserved its own spotlight and, with the age of the internet, one has to present things in different ways— the endurance of the physical work has declined, but its my firm belief the cultural significance of music is merely transitioning.

You’ve had lots of radio coverage including 6 music? How did this happen for you?

Steve Lamacq was in Southampton for ‘Sound In The City’, and I sort of coyly approached him with a CD— it was a big deal to me because all through my teens I listened to ‘The Evening Session’. He was very polite, but made no promises as he said he was handed a hundred CDs that day alone! So I was astounded when he elected ‘If you won’t’ to be play listed on BBC 6 Music.

Are you currently recording an album? If so when do you hope it’ll be released?

We have an album we completed a year ago! It is awaiting release— just looking for someone to put it out. I’m extremely proud of it. It showcases the gamut of our sound, which ranges from ethereal shoegaze, power pop, noise rock, psych and drone. All with an emphasis on song writing; melody at the fore.

Are you going out on tour?

Yes! We are currently planning and organising a Live Dates, culminating in a Tour: interested parties please get in touch. Keep an eye on www.facebook.com/burninghousemusic for news.

What’s next for the band?

We’re incorporating new members to enhance the live experience. I also have tons of news songs, melodies, ideas— I’m very excited about what comes next.

Finally. What’s your favourite fruit and why?

Is this a trick question? It’s a tossup between a Peach and a Persimmon. I would say the former at the moment…for obvious reasons.