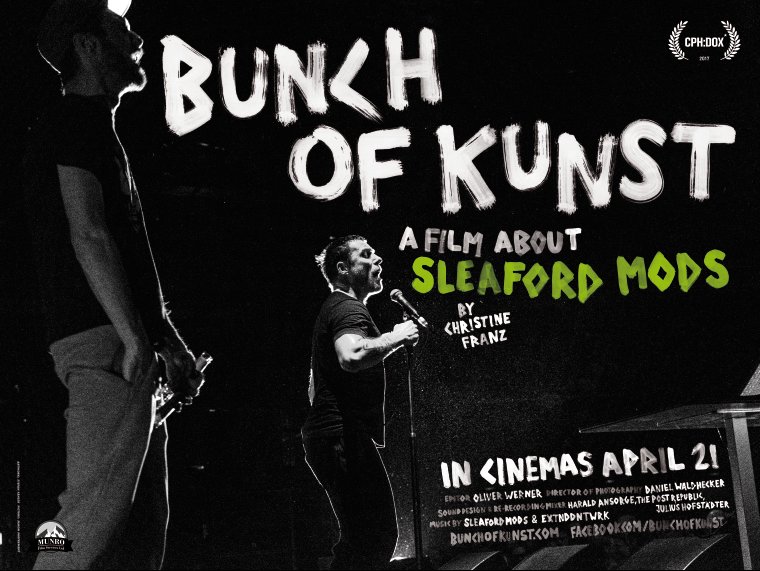 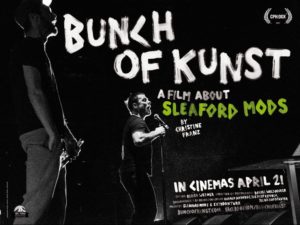 Bunch Of Kunst – a film about Sleaford Mods

Review of film screening and in conversation with Sleaford Mods by John Robb put on in Nottingham by the local DIY/punk rock radio station and promoter who you should support here.

It’s early on in this film that you are pulled in hook, line and sinker. Like all best keep the camera on music films, it’s the warts and all approach that peels back the layers of misinterpretation and confusion and the warmth of humanity that pulls you in.

For some, Sleaford Mods are those angry two blokes. Really fucking angry. Shouty and sweaty angry.

And whilst that’s true and a perfect reflection of the all the disappointment and frustration that the UK – with its grey skies, broken promises and forgotten towns can endlessly serve up and that has powered most of its best art and music, it’s also the sensitivity and the hurt and the warmth that makes Bunch Of Kunst so engaging.

If all that Sleaford Mods were was a couple of swearing blokes shouting at the world that would be engaging enough but it’s the humanity and the humility that sits between the cracks that makes them far more than righteous vitriol and it’s also their music that somehow finds a new sonic landscape to explore whilst tearing into the complacent let down of most modern music.

Maybe this film’s genius is because first time director Christine Franz is from Germany and just takes the band at face value without the agendas and homespun angles or maybe she is just a fucking great director who can tell a story by just being there – I think it’s both.

Watching a Bunch Of Kunst you feel the warmth and the humour and the relationship between the band’s two main members -wordsmith Jason Williamson and ‘bloke with laptop’ Andrew Fearn that make you laugh out loud whilst being touched by their friendship and mutual respect.

The shots in the studio, as they rattle off another album are pure gold. A snapshot of a creative process that looks brilliantly simple but is thrillingly effective. Emerging from the messy backyard of pop culture debris this is a band born out of the blitzkrieg anger of Crass punk, the Britpop hangover and the endless reach of the Roses and Oasis and the tearing down the barriers of hip hop – creating the space where you don’t need endless bands of lumpen guitar players running around in circles like Jason did for a decade before reaching out beyond the prison cell of indie rock.

Stumbling across Andrew after a few beyond the radar releases he forged a daredevil creative partnership that should not have worked in the trad rock obsessed UK but bizarrely hit paydirt with the pair of them looking more surprised than anyone. Then add Steve Underwood into the equation and you have a triangle of classic UK outsider rock with former bus driver Steve bringing his love of John Peel avante underground and off the radar industrial music like Whitehouse into the equation and mixing it into the band’s own chemical creative soup as well as his bedroom DIY label savvy and brilliant off kilter humour- if only John Peel himself was still with us he would have loved this whole operation.

The film captures this and the rain spattered concrete and flickering broken neon of the eternal nighttime shift of the touring band, the damp backstage with their energy draining lights, the adrenaline rush of wild eyed audiences singing along to every word in those complex songs like their lives depend on it and the great interviews with fans wild eyed with their excitement at finding a band that matters all perfectly bookended by Iggy Pop’s eulogy to the group and reading out of the lyrics reminding everyone of his own roots in hopeless small towns ignored by the big city.

Obviously we love Sleaford Mods. There is nothing better than this kind of willful, wild and articulate music. Jason Williamson’s word skree and Andrew Fearn’s mutated lo fi yet perfect beats are a perfect snapshot of grotty UK but also far smarter than they are letting on. We love the way their gigs are like exorcisms and their music gets up the noses of all the right people and the way that they have gate crashed the slumbering post Britpop, post everyone UK malaise like a meteor.

We love the way Andrew presses a button and the music explodes into the room and a thousand people go crazy – a perfect distillation of punk rock with powerful beats and those incessant and brillliant nass lines that are so key to their sound, we love the way they look nervous, stoned or knackered throughtout the film – that’s what touring is like. We love the way they look out of place everywhere they go – that’s because they are the real action timed and vision of these times and everyone else is the chancery…

Everyone has an opinion on the band. I can’t think of any other group we have written about that doesn’t divide opinion like them. Ranging from complaints about a bloke ‘who does nothing’ (despite the fact that he builds up and creates the beats and that perfect twisted driving sound and the presses go when it’s needed) to ‘this is not proper music’ to a fierce support as new converts arrive to their unlikely cause everyday.

Somehow even with their colloquial word skree delivered in a twisted Grantham accent the band broke out in Europe before the UK and it’s this outside peering into just how weird and genius British pop culture can be that is the core to the film. Add to this its gentle buddy buddy movie heart and soul that creates the magic. The cameras keep on running as the band start off playing in beaten up bars in Blackpool and all the way to huge stadium dates with the duo debunking the whole stupidity of rock culture just by turning up and playing and just beyond the camera you sense something far deeper and smarter in this quite brilliant of groups captured in this most perfect of films.

Every young band and every music college should be forced to show this film just to underline the genuine power of music and creativity.