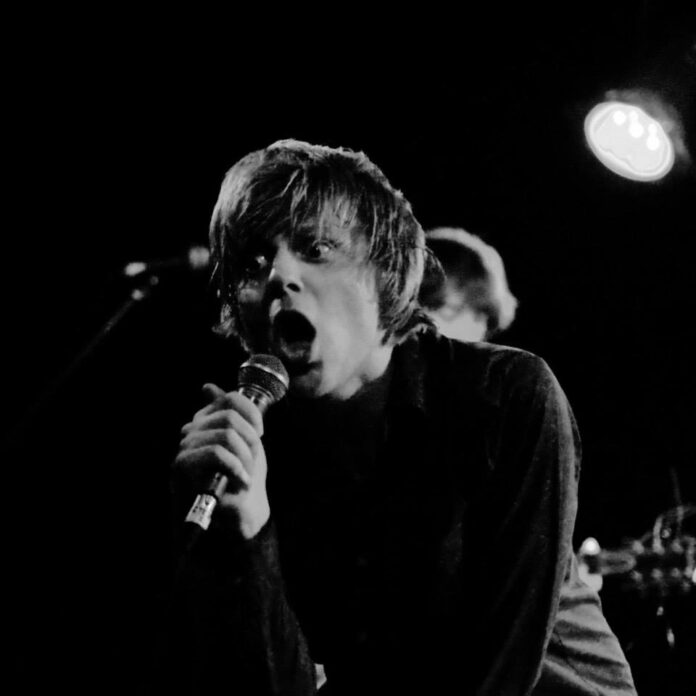 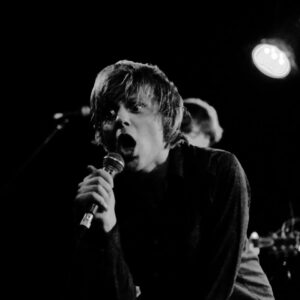 Ged Babey thinks that IOW Garage Band Bullybones are the most exciting new young unsigned band in the UK. And he’s not he only one…

There are two Charlie Pullingers; one is a polite, quietly-spoken barber from Ryde on the Isle of Wight.  Angellic-looking with a Brian Jones hairstyle and impeccable manners, he’s the kind of boy you want your daughter to bring home to meet you to ask for her hand in marriage.

The other Charlie Pullinger, the Mr Hyde to the other ones Dr Jeckyl, only exists on stage. The moment he steps up he undergoes an imperceptible psycho-sexual transmogriphication and turns into a nasty piece of work; arrogant, schitzo, feral, a bastard.  He screams and hollers to punctuate his singing and his bands songs.  He swaggers and dances like a young Tom Jones on hot coals. He swings his hips, pumps his legs, he’s is a real performer… and you don’t get many of them nowadays. For half the set he is saddled with a teardrop guitar playing rhythm, making him look even more like a young Brian Jones, but at least stopping him doing himself more injury.  ( His fingers are covered in plasters as a result of the previous nights performance)  At the climax of the set he ends up crawling the stage, rolling on his back,  screaming into the microphone… The lyrics he croons and roars are stories about mad women (Dead Flower Girl, Lemonade Lucy) and lust ( Comin’ Over, Bedroom) and revenge (Shoot You Down).  Taken at face value they are ludicrously misogynistic “This one’s called Shut-up and Make Love To Me, you know what it’s like… yap, yap, yap”. But the dozen girls dancing and whooping know intuitively that its all play-acting, a rock’n’roll theatre of absurd outdated values that match perfectly the era of the 60’s Garage-Punk derived sound (the Sonics, the Standells, the Seeds) of some of the songs. It’s not like the genuinely vile Rohypnol Disco of Robin Thicke.   Other Bullybones songs have a distinct echo of the Birthday Party (When Sally Calls) right down to the Pow-pow-pow’s and sex-horror-bat beat.

Someone said to me “It’s him that make this band special. He is a star”, which is true but then again it isn’t.  Guitarist Aaron is equally vital. His guitar-sounds are truly unbelievable at times.  When I see them play live, because I know the studio recordings so well, I swear I can hear keyboards -but it’s not, it’s harmonic noises wrung out of the guitar.  Then there’s the icy-fingers-down-the-spine sound which is very Rowland S Howard but I’ve never heard any other guitar-player get that sound. 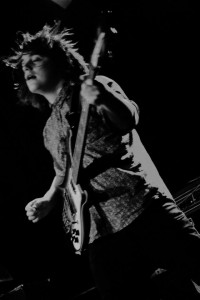 Bassplayer Illy is integral too. He is hyperactive on stage whereas Aaron’s practically a living statue.  His Micky Dolenz meets Cousin It hairstyle flails  as he plays -a cheeky grin peering out occasionally from all the hair.  His basslines are muscular and fluid and the perfect counterpoint to shards of guitarnoise in that they hold the sleazy groove.  ‘Comin’ Over’ in particular has one of the most groovy, growling, groaning and downright sexy  basslines I’ve ever heard.

Drummer Elliot is only 17 and only recently took over the stool from the departed Liam.  From day one he was determined to fit in and has worked his socks off, improving with every gig so that now he’s rock-solid and masterful, making himself irreplaceable.  He is a rock drummer though and I hope it’s just a coincidence that the band seem to have dropped the lighter, jazzier rock’n’roll crooner-type songs over recent gigs.

The bands one and only cover is a righteous, adrenalized version of The Rolling Stones ‘the Last Time’ which is faithful to the original and stunning even if, like me ,you’re not a huge fan of the Stones.  An original number ‘Nonplussed’ carries on the musical theme only sounding half Cramps half Stones with harmonica and guitar and a vintage groove. 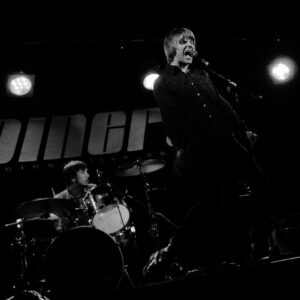 Bullybones trawl the decades for influences from the ’50s the ’60s, the ’70s ending in the early ’80s, a decade before they were born.  They are archivists and re-enactors, yet at the same time the most fresh, modern, alive live band you’ll see. They make bands who are in a way their contemporaries like the Strypes and Amazing Snakeheads seem decidedly average because they lack the sheer charisma and quality song writing and somehow the desperation.   It must come from being stranded on an island.  Like rock’n’roll Cinderellas they have to shoot off after every mainland show in Portsmouth or Southampton at 11.30 prompt so they don’t miss the midnight redjet ferry home and turn into pumpkin girls in rags.

They are trying to release a single, once they’ve got the funds together, having decided to delete the second album they recorded with old drummer Liam ( One copy was made, a present for my 50th birthday, making me the luckiest bastard on the planet) I am seriously starting to worry about my sanity. At my age I shouldn’t be so obsessed with a band and their music. It’s not normal to listen to 13 songs again and again on repeat, almost ten times a day, practically every day for six weeks. And then for a bit of variety, listen to their first album several times… And then go and see them play every gig they play within range.

I’ve never been tattoo-ed, but for my first one I’ve decided when I do it’ll be BULLYBONES inked on my skin as a permanent record of how obsessed I am with them and how great their music makes me feel.  They make me wanna dance, scream, laugh and dance some more. They make life better… soundtracking every boring journey on public transport and every smoke-break at work.

It is ridiculous. It’s the same way I was at 14 with the Sex Pistols, at 15 with the Buzzcocks, at 17 with the Psychedelic Furs, at 20 with Sisters of Mercy…

This was the fourth time I’ve seen Bullybones in the past couple months and they are just so naturally brilliant it’s almost impossible to get over to those who haven’t seen them in sensible, rational terms without sounding like I’m exagerating. I’d taken to saying they look like the Monkees but sound like the Cramps. and, early Rolling Stones with a bit of Birthday Party thrown in. Or a cross between the Sonics and Oasis! 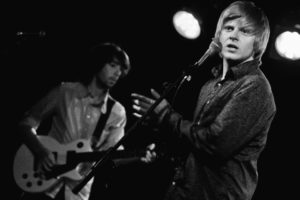 But they are all of things and more. They have a set of film-score surf-punk instrumentals apparently. They have an EP’s -worth of  vintage 50’s style crooner rock’n’roll originals like ‘Sit on My Sofa’  and ‘Don’t Ration My Passion’ (which climaxes with a echo-laden cry of ‘I’m a mean motherfucker, so get down on your knees’ …)

They played the Dorch  to four people, including a wheelchair-user who ‘danced’ in her chair, rocking it so much I thought she was gonna fall out of it. “I used to love dancin’, I really miss it” she told me.  She loved Bullybones, particularly the Stones cover, being an old fan of Jaggers mob.

They played the Barn in Pompey sandwiched between a grunge/noise act and a psychobilly band and impressed a tough crowd of hard-drinkin’ punk-nutters.

Auditioning for the Isle Of Wight festival one judge ( the bloke who wrote the Big Brother theme) was unimpressed with Aaron, one of the best guitarists of his generation, onstage.  He had ‘no stage prescence’ and should move about more.  Charlie asked him if he’s ever seen any footage of the Who  (John Entwhistle in particular).  ” I wasn’t talking to you” the judge snapped back.  “You were talking to the band…”  Charlie said through gritted teeth apparently.   Needless to say they didn’t get the gig.

Some feedback from a record company said Bullybones were ‘too traditional’.  As in Elvis,  Rolling Stones, the Stooges ?  That tradition called Rock’n’Roll!!!??   What do they fuckin’ know?

Bullybones need a camper-van style tourbus and an agent so they can tour the country and blow people away with their inspirational, traditional rock’n’roll fantasy venom and tunes,   Mick Mercer loves them.  Everyone who sees them play loves them. They really are an exceptional band…. and yeah I’ve strayed off the point of a live review, but they are my latest obsession.  If I had any money I would invest it all in Bullybones as they are solid gold, rock action. Probably the best young, ‘unsigned’ band in the UK.

Bullybones play the Enterprise in Camden, London on Thursday 17th July. I’ll see you there.

Keep up to date with news about Bullybones from the band’s following online presences:

All words by Ged Babey. Photography by Adam Barnes. More writing by Ged on Louder Than War can be found at his author’s archive.