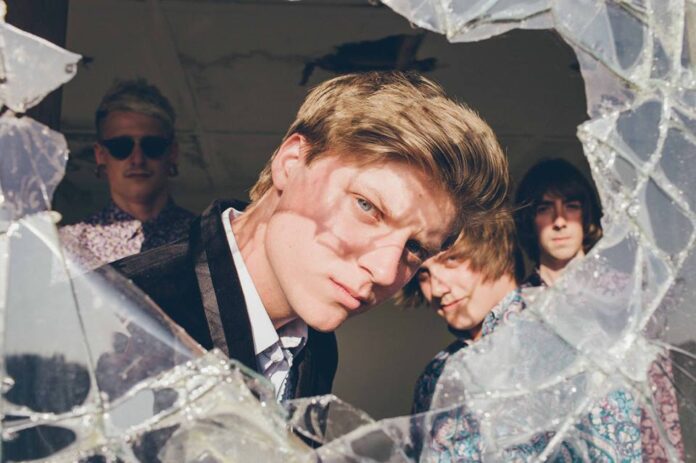 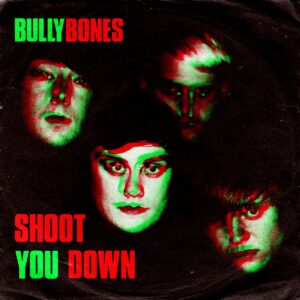 Bullybones – Shoot You Down (self-released)

Ged Babey discovers his New Favourite Band and tries desperately to be objective and coherent … as he explores the good taste and bad attitude of Bullybones.

If, in the first verse of the opening song of your debut album you control the elements, discover a lost continent & massacred tribe, take over a country and become their ruler … then you are either an insane megalomaniac or you have brought out an incredible album … one which anyone into primal rock ‘n’ roll simply has to hear …  The song, Shoot You Down goes like this:

“I crushed the mountains and buried you in snow,

I tamed a nation and got them kissing my shoes.

And what, my friend, will become of you?

YOU AIN’T GOING NOWHERE!!!  Shoot you Down!”

(The bit in capitals is screamed, but not in a girl-ish way, by a man-boy-child who is possibly the love-child of Nick Cave and Lux Interior, if that were physically possible. Ladies and genital-men, I give you, Bullybones,  The best new band on the planet. (Typical exaggeration yeah, but objectivity be damned I loooove this album… )

As I start my 50th year, I’ve yet to finish my thesis, which OK, is more a generalisation, on how and why the only bands worth seeing in 2014 are made up of people over the age of 50 … Bad Seeds, Kill Pretty, Nightingales, Subway Sect, Goldblade, Ruts DC, Fallen Leaves … a hundred others…

And then along comes a band in their early twenties who blows them all away and makes them all look and sound like geriatric old cunts in the two minutes that the first track on their debut LP lasts.

(Apologies to all the older bands mentioned … I’ve never subscribed to the theory that rock ‘n’ roll is ALL about Youth Youth Youth, quite the opposite, but it helps when the energy of youth is combined with the best in good taste and a good old fashioned bad attitude. Bullybones are Young Connosieurs. Forwarding-thinking, backwards-looking Garage Punks who have made a perfect album to specifications that came straight out of my dreams of a fantasy band.)

Bullybones come from the Isle of Wight. (My family, on my mother’s side, were from the Isle of Wight. Instead of thinking of Jimi Hendrix on fire at a legendary festival, mention of the island conjures up sleepy images of rainy childhood holidays, big-eared boys on farms and the worst waxworks museum in the world to me…) Which could explain why they are so unlike every other band of their age at this point in pop cultural history. Bullybones either exist in a parallel universe or have access to a time-tunnel; they sound a bit like the Sonics in 1965,  The Birthday Party in 1979 (when they were the Boys Next Door) and the  Cramps in their prime. They also remind me of pre-Adultery / Horrorshow Scars and pre-reinvention Neils Children, the band who inspired the first incarnation of the Horrors.

Bullybones are just a perfect band, or, OK, MY perfect band. I have had numerous favourite bands-ever ever ever… but the ones that are forever untouchable are the ones I never saw live and never will. The ones that will not reform and piss on their legend. They become fixed points in time and space. Iconic. The Birthday Party are one, The Cramps another and I would say the Sonics but they do still gig occasionally, dragging their ancient bones on stage and cranking it out. 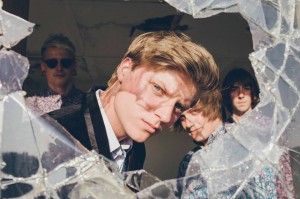 It takes some band to even attempt to match the intensity and the righteousness of The Birthday Party and the Cramps. Bullybones manage it, without even trying too hard,  They also look great and move well, which helps. It’s the singer, or should I say screamer, who focusses it or it is focussed on. He is as cool as fuck.  He looks a bit like a young Malcolm MacDowell (which to my mind is the very best a young man can possibly look … I’ve always had an embarrassing man-crush on Malcolm … I don’t wanna shag him, I just wanna be him OK? Be that cool.) Charlie is a real performer who can work a mic-stand and has a demonic stare that makes panties drop at ten paces. In true Garage band / Billy Childish fashion, sleazy sexism and cartoon misogyny is on the menu. Lines like:

“You Know what I want and it’s under that dress”,

“Now shut-up and drop your keks”  are spat out with relish.

What you have to remember though is that these kids were born after 1990; they’ve lived under the cosh of Political Correctness their whole lives. So hearing all those trashy old songs and watching 50s & 60s cult movies, the appeal of ape-ing the arrogance and incorrectness of those times goes hand-in-hand with the primitivism of the tunes and sounds of say the Sonics (She’s a Witch.) The Cramps were so obviously comic-book that no one ever accused them of sexism cos Poison Ivy would’ve punched their fucking lights out.

Bullybones, I’m sure, know that it’s a theatrical kind of bullyboy camp & attitude they are projecting …  Or are they just nasty, vicious boys who treat chicks mean? Just watch the videos and listen to the Soundcloud and make your own mind up.

There’s one track, an instrumental called Can’t Find My Shadow, which is amazing surf-punk, recalling the Shadows (my guilty pleasure) playing in a garage, concocting a theme tune to a Randall & Hopkirk (Deceased) style TV series.

Chills And Fever is a great old rock ‘n’ roll ballad which Tom Jones covered when he was cool, decades before doing the Voice.

Shut Up And Make Love To Me is the most sublimely blunt song-title for several decades.

And Come Dance With Me, a song about the groom being jilted at the altar.

I have written a couple of manic, over-the-top reviews like this before, and have had regrets afterwards, particularly when I read a comment which said ” Well that (review) really put-me-off wanting to buy that album”.  The complete opposite of my motivation / intention. But in this case I really don’t give a fuck, because the pleasure I’ve got out of this album, since it arrived a week ago, is immeasurable. If only one or two other people get the same enjoyment out of it that I have, then that is reward enough.

Great album. Which was actually released in the Summer of 2013. They have already recorded the next one (which will probably be shit and see them move into jazz-funk…)

And, when Bullybones are the biggest cult-band going, remember who recommended them … not me, Marco from the Lo-Fi Poet Band (who put me on to them and booked them for a Strummerville gig in my hometown)

To download or stream the album go to their Bandcamp.

All of Bullybones music is available on Spotify, Amazon and iTunes.

Bullybones and a cast of thousands play at the Southampton Strummerville all-dayer on Saturday February 15th at the Joiners in Southampton.  It’s a gig worth going to anyway if you are in the area, but to miss out on seeing Bullybones would be a crime. (I’ve no idea what time they play so best turn up at lunchtime…)

All words by Ged Babey. More of Ged’s writing on Louder Than War can be found at his author’s archive.