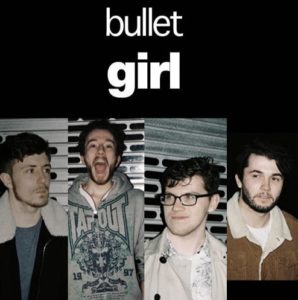 Louder than War’s Ioan Humphreys gets accosted on social media and absolutely loves what he is sent in the shape of  Bullet Girl’s balls to the wall punk via the IDLES community Facebook group.

Don’t get me wrong, I love getting accosted on social media by bands looking for a review of the latest track/single/album that they have been slaving away at for (possibly) years. Artists getting in touch speaks for my writing more than anything, so I take it as a compliment rather than a chore. The latest accost came after I shared a review to the Facebook group ALL IS LOVE: AF GANG (IDLES Community). This group is a community, not only dedicated to the second most important band in the UK at the moment (after Sleaford Mods!) IDLES, but their musical influences that are far and as reaching as each member is able to share. I can’t speak more highly of this disparate group of fans. They share their love of IDLES, and music in general, and never fail to put a smile on my face.  I urge you to join in their love of IDLES asap as they are a great bunch!

Anyway, back to this piece and I was accosted by one of their members from Ireland who heads up a band called Bullet Girl. Their Soundcloud link doesn’t offer much info, but as far as I can make out, they are a four piece punk band near or from Dublin and they play fast as fuck infectious 2 minute rackets that I absolutely love. And one of their members is called Dylan.

The track in question is called Wasted and starts with a bass riff that would strip paint. The rest of the band gradually join in with this 100mph 2 chord masterpiece with the vocals complaining of “she said, you’re such a bore”…

Although immediate reactions invoke Buzzcocks and The Undertones in the sound and age of the band, this track feels neither forced, nor reminiscent of days gone by.

The vocals are insistent and intense and delivered in straight faced matter of fact way. It’s almost as if they just want to get this track over with, so they can get on with the next one! Which I love. It’s breathtakingly fast and over before you know it, yet it has a depth and breadth that is annoyingly addictive and just can’t help bring a big fuck off grin to this miserable face.

Send more Bullet Girl asap please and thank you for the accost!

Bullet Girl can be found on their Facebook and Bandcamp.