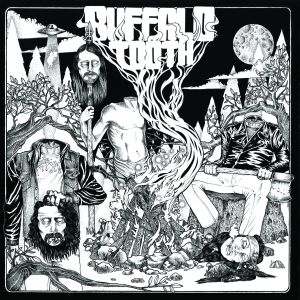 Buffalo Tooth is comprised of members from the now defunct Poor Sons and stoner glam goofballs Glitter Wizard; Greg Downing on guitar and lead vocals, Eric Kang on bass and Sean Grange on drums. In Native American culture, the buffalo tooth represents resistance and power, and this symbolism fairly accurately mirrors the modus operandi of the band. I’ve been following Buffalo Tooth since the bad-ass bluesy jams of their self-titled 7” EP was released through Archer’s Guild in October 2012, and now, after some setbacks in the studio resulted in a full re-recording by Patrick Haight at the Spot-On Sound compound, their debut LP finally drops at the end of September.

By title alone, Gardeners of the Devil’s Lettuce reveals its propensity for typically sludgy stoner rock qualities, although Buffalo Tooth compose their songs using a much broader spectrum of influences. The quavering amphetamine jolt of Downing’s rapid vocal attack seems to add a touch of glitter to their furious, raging fuzz. There is also the sheer sonic violence of hardcore blast beats in Sean Grange’s drumming, while the guitar tone vacillates between ruthless Motorhead-caught-in-a-backdraft-explosion style riffing and the bright, vintage twang of 60s country or surf rock. Meanwhile, Kang’s bass playing is the kind of deep and dark low rumble that subconsciously awakens an epoch-making disturbance in your very bowels…

No matter how many genres they flirt with or how unconventional their song structures may become at times, Buffalo Tooth always has an undeniable fast-driving power. Their filthy, mind-bending schizophrenic shred suites evoke an infinite party atmosphere reminiscent of their peers in equally exciting California-based face melters like Hot Lunch and Lecherous Gaze. Glancing at the tracklisting, with titles like Mr. Vibrator, Wet Circumstances, Sex Priest, Smells Like Jello and Street Poo, you might be forgiven for mistaking Gardeners of the Devil’s Lettuce for a Zappa-esque sex parody album. Dig a little deeper and you’ll find surprisingly shrewd, socially-conscious songs about the inhumanity of the drug trade (Greenbacks) and a Mormon polygamist science fiction fantasy (Space Polygamy).

Buffalo Tooth definitely has a sense of humor, though. Despite being an obvious reference point, their monolithic riffing still lacks the portentous doom of Black Sabbath, and is less about Stonehenge than it is about a late night Seven Eleven snack splurge (Snacktology). Similarly, you wouldn’t really associate lead single Sex Priest with churches, and it is not so much a bubbling cauldron of occult mysticism as it is a boiling hot Pot Noodle. The accelerated tightness of the record just means there is no time for incantations and spells, and it is a maddeningly potent, bracing dose of black weed-poisoned mayhem. If Black Sabbath is ‘the John Milton of rock ‘n’ roll’, then the free-spirited Buffalo Tooth could be its Timothy Leary (“Turn on, tune in, drop out”).

Buffalo Tooth are on Facebook, Twitter, and are currently offering free downloads of their previous two 7″s via their Bandcamp page here. The first edition of Gardeners of the Devil’s Lettuce will be available in limited white and black splatter vinyl from Captcha Records.