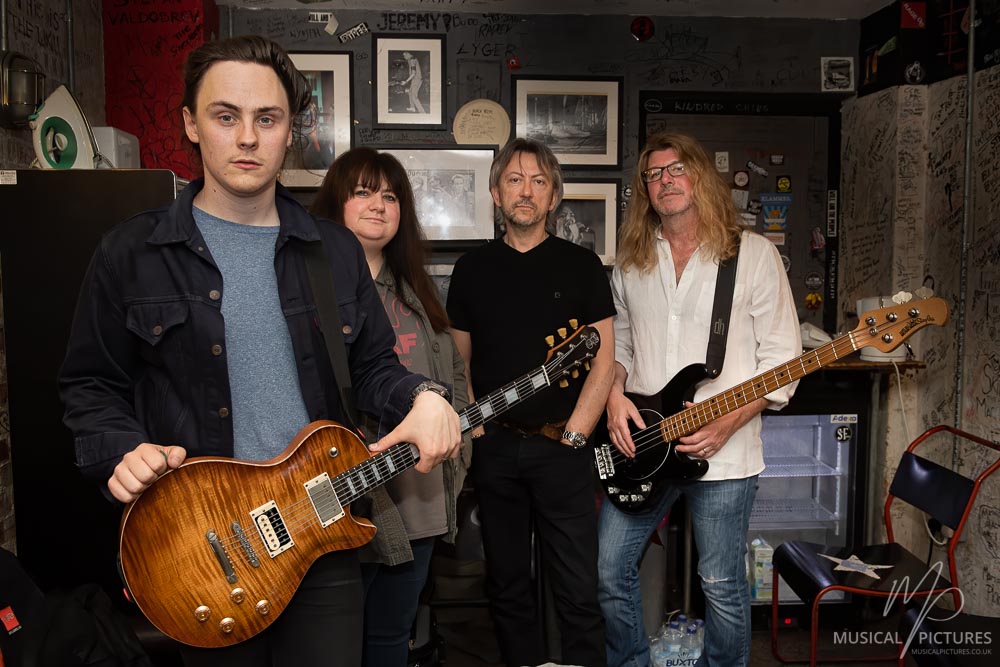 Buck & Evans crank up the amps for the first time in months to join in with the live stream sensation that’s gripping the nation. At his end, Simon Reed sinks into the sofa for Louder Than War.

I first saw this band at the inaugural Ramblin’ Man Fair festival, which I photographed in 2015. They were buried in the mid-afternoon undercard in a tent dedicated to country music. I wasn’t expecting much, which was just as well given I only had ten minutes to kill before finding a far better band on a far bigger stage.

With a name like Buck & Evans, I anticipated a couple of banjo playing old guys in denim dungarees. What I got was a vocal (Evans) to rival Aretha and one of the best guitar players (Buck) I’ve ever heard. It was as far removed from country music as Covid-19 is to accommodating blind dates and they delivered without doubt the best performance I saw in the whole weekend.

The Buck is Chris Buck, a guitarist with a touch that belies his modest years; the Evans is Sally Ann Evans, a pianist with a voice that could melt glass. Whilst first performing as a duo, they quickly became a four piece by recruiting Dominic Hill (bass) and Bob Richards (drums), both of whom have a formidable musical resume. Buck & Evans in isolation might both be outstanding musicians but neither is as good as the sum of the parts.

Tonight, they head down one of their native South Wales valleys to Merthyr Tydfil for their first gig since March and their first live stream, though Buck is no stranger to being behind a camera. His YouTube channel has close to 100,000 subscribers and his Friday Fretworks videos have quickly become a staple for guitar enthusiasts across the globe. He’s worth watching just to see the restoration of a battered 1962 Fender Stratocaster he picked up for a song at a house clearance sale. He could probably pay off his mortgage with it now. 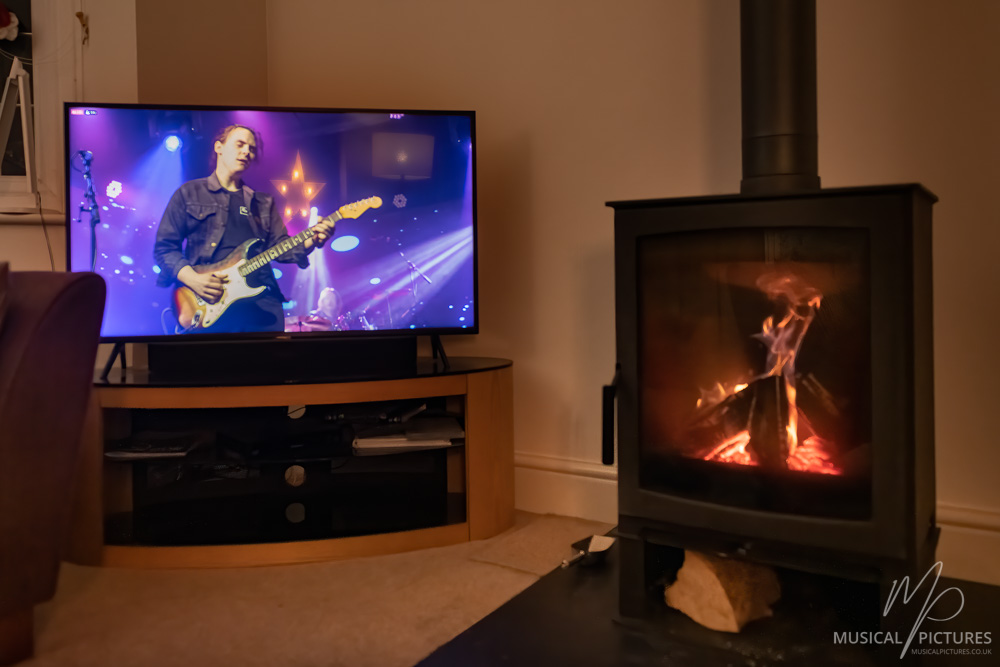 It’s my first live stream too and being as bereft of live music as the band are, I’m eagerly looking forward to it. I successfully hook the laptop to the TV, chuck a log on the fire, grab a beer from the fridge and settle down with the family. It’s a sign of the times that watching a stopwatch in reverse on the screen inexorably click down to zero is nearly as exciting at standing with your thighs wedged against a stage.

Buck & Evans open with Going Home, a song that fits right into the rock & soul wheelhouse by which they self-define and we get to see Buck play that 62 Strat for the first time. There is a desert highway straight out of Thelma & Louise on back projection screens and the lighting is excellent. You can properly hear backing vocals; something, which if I’m honest, I’ve never really heard with any fidelity at any Buck & Evans gig I’ve actually attended.

In order to stave off the peculiar inevitability of silence between songs, the band segue into their next tune. Buck holds a note whilst hovering on the edge of feedback and it sounds exactly like the opening of Hendrix’ Foxy Lady. It’s not. The song Impossible breaks through. It’s got a great walking bassline and a big change in dynamics between verses and choruses.

At the close, the band give in to the silence but use the time to say hello and to request messages via Facebook. Until this moment, it hadn’t dawned on me that this could be still be an interactive experience. I’m so excited, I send them a photo of the lounge, with which, I imagine, they must be thrilled.

There’s a short instrumental intro into the song Slow Train, the first single from debut album Write A Better Day. Buck picks a harmonic and bends the neck of that precious guitar to drop the pitch of the note by a tone. Hundreds of guitar nerds, myself included, grip the sides of their sofas.

Chat with the crowd and between themselves is as much a part of a live Buck & Evans performance as the music. They once had to put a gig on hold between songs so Bob Richards could place a bid on eBay. Tonight is no exception, despite the strangeness of the circumstances.

They play Treat Me Right, one of the first ever B&E songs to fall off the set list, but which they play tonight because as Buck says: “Quite frankly, we’ve got space to fill”. “You’ve added an extra-long guitar solo in it as well”, adds Sally Ann. “Well that always helps. If you want to keep my interest in a track, just stick a really long solo in it” Chris replies. In their self-deprecating way, they set it up as a filler, but it really isn’t. They change up the arrangement from the original and that extra-long solo is something else.

Whilst I doubt anybody watching this is viewing it as a way to fill time, there’s no curfew here and the band are able to play the entire repertoire. Fix You, One Four and Trail Of Tears all fly by and soon we hear another old song; Screaming. We learn it’s inspired by When The World Died Screaming, a poem written by Catherine Noyes.

Sally Ann remarks that the sentiment within it is quite appropriate right now. It’s another tune with wild swings in dynamics. When it’s loud, it really is loud and the vocal performance in this one is celestial. In the lounge it’s remarked that this could easily be a Skunk Anansie tune. It’s not a correlation I’ve ever made before, but it is very apt.

Dreams To Remember comes next. It’s an old Otis Redding song, though the band have made it a highlight of any Buck & Evans performance. Buck remarks: “If you don’t know it, it’s one we wrote in 1965”. He plays a sublime solo at the end that builds better than Balfour Beatty and which tonight lasts three seconds short of a full five minutes. It turns out there are benefits of repeatable live streamed gigs, even if you do have to possess OCD to reap them.

By now, some feedback from Facebook is coming in. John is watching in Pompeii. The band is impressed, as am I – the image of a young, bare-chested David Gilmour torturing his whammy bar can’t help but spring into my head.

The band play Sinking. It’s my personal favourite, an epic song that starts with sweet solo vocals and Rhodes piano and builds to a full-on rock tune over the course of around six-minutes, without you ever noticing quite how they got there. There’s a characteristically brilliant guitar solo at the end that has me thinking about Gilmour again. If Chris Buck ever had a Comfortably Numb moment, this is it.

There’s more from Facebook. It turns out John is from Pompey. The Gilmour image is replaced by one of the Isle of Wight ferry leaving plumes of diesel smoke in its wake as it escapes the harbour, which is a shame. That said, whilst they may not have nailed Pompeii, there is significant interest not only from elsewhere in Italy, but Ireland, Denmark, Sweden, the Netherlands, Germany, Spain, the Czech Republic, Canada and the USA, as well as all four corners of the UK. It’s hard finding anything positive out of this year but streaming gigs bringing live shows to an audience who wouldn’t otherwise be able to see them is a small recompense.

Sally Ann stands up to sing the next one and gets an electric shock off the mic for her troubles. I hope she’s OK because the stream freezes and for a period, there’s concern in the lounge that the whole thing may have gone down. It’s Apollo 13 in blackout all over again. Luckily, as per the astronauts, Buck & Evans return. Sally Ann is alive but strangely is sitting back down behind the keys. In the ensuing confusion, it turns out Buck was wearing the wrong guitar and the band have decided to swap two songs around.

As a result, we now get Sunrise, a track that has another barnstorming long instrumental ending and one that would normally close the show. At the end, there is of course silence on the TV, though we make up for it in the lounge. It remains a strange experience for us all.

The band play Back To Yesterday, the song we should have just heard. Evans stands back up, returns to the errant microphone and gets electrocuted again. I think she’d probably have preferred it if they had stuck to the original order. This one has some crowd participation breaks built into it. “We can’t hear you Pompeii” shouts Buck during one of the silences.

And so, as all gigs must inevitably finish, so must this and finish they do with the song Sunshine And Moonlight. It would have been an encore had they felt predisposed to walk off and on again. This is another track I love, and it seems to have more funk heaped upon it every time I hear it. I feel it’s only a matter of time before Sally Ann Evans hits the Clavinet button on the keyboard and they go full Stevie Wonder on it.

As the last chord rings out, the family look to each other in the lounge and applaud.
It’s been a really enjoyable night and it’s been fantastic to see Buck & Evans perform again after such a long time, but it’s also a mild kick in the teeth as it serves to remind us what we’ve missed this year and that we’re still likely months away from doing it in the traditional way with feet stuck to the floor and beer flying around our faces. Until those heady days return, we can but dream.

You can catch up with this live stream and all other things Buck & Evans by visiting their website or Facebook page. The live stream video costs £10 to access and will be available until at least Saturday 19th December. Chris Buck’s Friday Fretworks is on YouTube.

All words and photos by Simon Reed. His website Musical Pictures is here and you can visit his author profile for Louder Than War here.

This is Simons first review for Louder Than War.