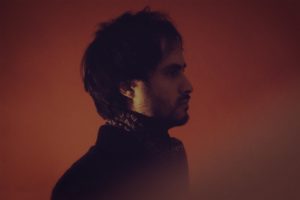 The Nightcrawler is the enigmatic and unsettling debut single from London based singer songwriter Brudini. Emerging from Soho’s bohemian arts scene, Brudini spent his upbringing in Norway before uprooting himself to settle in London after a nomadic period absorbing the swarming metropolises of Tokyo and Paris. A regular fixture in Soho’s Society Club, Brudini has attracted praise from NYC punk manager legend Danny Fields (The Stooges, MC5, The Ramones) and has also collaborated with Lulu Gainsbourg (son of the famous French legend) and Californian writer Chip Martin.

The track starts with a great bombastic, nay spazzmodic drumbeat that sets the whole tone and rhythm of the next 3.46. Arpeggio guitar and high in the mix reverb vocals come in. Brudini’s vocal’s remind me of good country and western and sounds like Chris Isaak circa Wicked Game. Very brooding and full of emotion. Really interesting, a great voice and a breath of fresh if I’m honest.

The guitar continues throughout and is very reminiscent of Thom Yorkes’ guitar on In Rainbows. I’m not complaining though; it’s good stuff.

Half way through Brudini introduces bursts of jagged stabs of guitar noise over the gentle acoustic guitar that gives post punk texture that I approve of. The noise is ramped up through the last three quarters and with the atmospheric “ohs” and “ahs” the uneasy music, uneasy lyrics and uneasy vocals come together perfectly to reflect the track title. The Nightcrawler suggests a songwriter with a dark edge and a sense of humour. As a debut single it more than showcases Brudini’s abilities as a songwriter and musician.