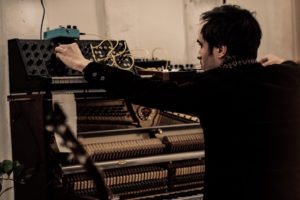 Louder than War’s Ioan Humphreys get’s a first listen to the brilliant new single from the indescribable talent that is Brudini.

I’m no stranger to the work of Brudini. In fact I reviewed his debut single for Louder than War here. Since then he has collaborated with Lulu Gainsbourg (son of the French icon Serge Gainsbourg), agender BBC superstar Lanah Pillay and Erasure’s Andy Bell. He has also performed at Tate Britain and headlined last year’s Blogtober Festival.

His latest single is called ‘Reflections’ and is the first release from his latest album ‘From Darkness, Light’. According to Brudini, ‘Reflections’ ‘is at the centre’ of the album which is described as a concept album. It even has a cover designed by Hungarian artist Gáspár Riskó entitled ‘the beautiful machine’.

An absolutely gorgeous throbbing bass and drum starts this track. A feint electronica buzz comes in to welcome Brudini’s unique vocals. And they are unique. They are not what you expect from the start of the track and the almost jarring chord progression is again, surprising, yet it just makes sense. Throughout, the vocals play off the gorgeous orchestration and the piano progression perfectly. The final third has a beguiling piano led lead off and a finale that is absolutely beautiful and equally brutal in its emotion.

Lazy Radiohead comparisons aside, this track is an absolute triumph that takes the listener on a journey that evokes feelings and desires through its throbbing bass and ethereal electronica. It’s immensely catchy and is a perfect introduction to Brudini’s idiosyncratic delivery, and it’s melded with a traditional song writing bent that works so well. I can’t recommend Brudini enough.

Brudini’s live show can be psychedelic to the point of being a total sensory experience so make sure you check this amazing talent out when you can. Brudini’s debut album ‘From Darkness, Light’ will be released later in 2019.