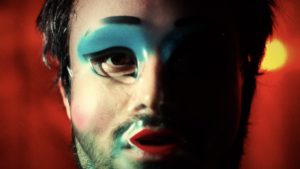 Louder than War Premiere the new single from the incomparable Brudini.

‘Emotional Outlaw’ is the new single and video by Brudini, and it’s a collaboration with New York based fashion photographer Fabrizio del Rincon. The video for the single sees Brudini running up against an androgynous – and ambiguous – figure (played by queer model and Elsewhere-bartender Didi Fredrika), who assumes the role of soul companion, of muse, of demon and – perhaps – a personification of suppressed aspects of himself.

‘Emotional Outlaw’ is the second single from the forthcoming debut album, ‘From Darkness Light’, and follows the release of critically acclaimed ‘Reflections’ earlier this year.

Jazzy drums and cymbals start this track. Then in comes the throbbing electronica and some nice organ accompaniment which drives the tune, very much in the way Conway Savage does in the Bad Seeds. Brudini’s distinctive vocals come in singing about “Emotional Outlaws” and being “pulled out of my limbo”. This keyboard attack also reminds me of the late, great Jonathan Fire Eater! Nice.

There is a mid song breakdown where the tempo remains the same, but a piano now drives the rhythm (as well as the jazz drums). Along with some far out space age electronica sounds, the breakdown is incredibly dramatic and this is only made more intense with a short lived, yet loud and aggressive guitar solo.

The video itself is dark with visuals reminiscent of David Lynch doing a vampire film. It’s awash with red velvet curtains, strange heighted chairs, disturbing visuals with Brudini’s running clown makeup and Didi Fredrika’s face obscured and bound by her own hair. There is a tension and an almost violent ballet between the two, played out to the organ stabs and insistent drums. After the breakdown, Brudini takes to wearing a transparent mask which does no fucking favours for the dreams I’ll be having later. It’s not pleasant. Yet, I don’t think anything about the song, or visuals were ever intended to be ‘nice’. Good music should be hard work and should be disturbing at times. If the visuals that come with it are equally disturbing then even better. Yet again I have come out of retirement to review a Brudini release (soft I am), but yet again I’m just simply blown away with his knack for a tune and his ability to feel ‘different’, yet commercial. However, this time he brings the visual performance that just adds to the originality and idiosyncrasy that Brudini has always produced. It starts to cement him as the serious artist he is, and hopefully this will flourish into the success he deserves.