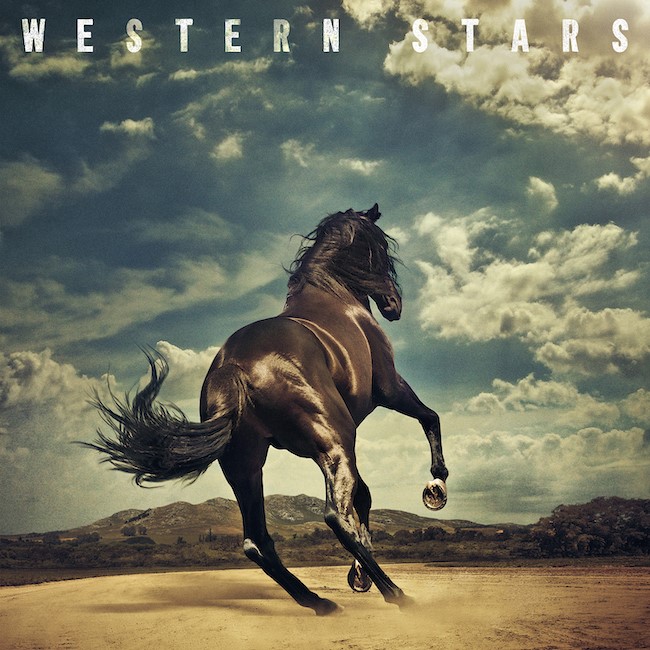 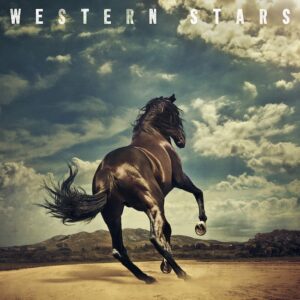 The Boss goes on a solo trek thru America on his 19th release.

Bruce Springsteen will be 70 years of age later this year and Western Stars, his first new album in 5 years, see’s him recording solo in a reflective mood, turning his incisive eye and ear to the American landscape.

In the past few years, Springsteen has released his autobiography, Born to Run, and completed a 236 run of a one-man show on Broadway, which gave him the opportunity to look back on his life, explain his inspiration, and do some debunking of his own myth. One of the first things that surprise about his autobiography is when he describes the first time his band travel across the country and his inability to drive nearly ruined everything. The man who gave us Racing In The Streets, couldn’t drive at 19? And again, as he says on Broadway, he’s never done a day’s work in his life, yet based a career on singing about the working man. Then adds, “that’s how good I am.”

Of course, rock ‘n’ roll heroes, like that other great American icon the cowboy, is based on mythical legends and larger than life characters. What you see on stage, what you hear in those grooves, isn’t the real person who sits eating breakfast and watching the news. The psychological damage that affect so many entertainers can occur when the edges become so blurred that the artist themselves aren’t sure where one begins and the other ends. Springsteen himself is too self-aware to fall into this. But because the rock ‘n’ roll lifestyle is part rebel myth, doesn’t mean those who follow the path are following a lie. What they are following is a dream, because they themselves are in love with the myth, and want a part of it, so they create themselves in the image of the myth. It’s a self-creating prophecy. When Springsteen sings about the working man, it isn’t a lie, he’s singing about his father. When Springsteen sings about racing cars, he’s singing about what he saw in his formative years growing up in Jersey. Springsteen is a real deal rocker who walks the walk, talks the talk, doesn’t take his image too seriously, but takes his craft very seriously, and may well be the last great rock ‘n’ roll superstar. In these days of a decline in interest in rock music, few performers in that genre can fill stadiums like the Boss.

But Springsteen is more than just fast cars and blue collar workers. On Western Stars, with its untamed horse jumping free in a prairie landscape on the cover, he presents 13 songs peopled by drifters, thrill seekers, loves lost losers, grizzled old timers and young adventurers. There is a theme of constantly moving on, looking for something that can never be found, and sometimes regret for what has been left behind. Narrators looking back on their lives and wondering how many more chapters there are to write. Lyrically he has always nailed beautiful street poetry, in earlier times he was thought of as a Dylan impersonator but he quickly showed how to turn rock lyrics, the street, the concern of working folk, into true grit poetry, in the same way that Lowry turned scenes of northern working life into art. Musically there is deceptive simplicity in the acoustic guitar, which is surrounded by orchestration that brings a sweeping soundtrack to the mix, creating an epic landscape from some cool 60s road movie. At the centre of the music is Springsteen, the loner, the drifter, the searcher, the voice now more grizzled, thoughtful, imbued with years of touring, people, places, but always with an American vision of freedom and wide open possibilities in wide open landscapes.

Opening track, Hitch Hikin’, sets the tone with its narrator standing at the side of the road, thumb out. The voice weary, but happy, a rolling stone hitting the road. A banjo arpeggio, surrounded by lush strings, the soundtrack to a country whizzing by as another new journey starts. It’s a trip where no maps are needed, for there is no destination in sight, just the journey. The song sounds like morning breaking, dawn spreading its musical wings over the drifter, the thumb stretched out, not in hope, but just because there’s another road to travel down.

The Wayfarer starts with a juddering tension that builds up into a symphonic celebration as the wayfarer drifts from town to town because he can’t settle, wandering is in his blood. When he sleeps, he can’t count sheep for the white lines flashing past his eyes. But there is the lingering question of where are those people he left behind, what are they doing, and what if he had put down roots?

Tucson Train builds on this idea of what has been lost by the wandering. It opens with a snare drum train clattering down the tracks, a fanfare cinematic opening, and the singer explaining how he had been down and out in Frisco, tired of the pills and the rain, and set off for the sun, but left a good thing behind. He had fought with the good thing, fought hard over nothing, but now she is coming out to him on the Tucson train. He had wanted a new beginning, but the new beginning only showed him what he had lost, and now she’s coming back to him on the Tucson train. Sometimes you got to get away to see what you have.

The titular track, Western Stars, has a haunting opening, the music a backdrop of deserts, prairies and the scorching heat; a landscape that offers endless escape and freedom. It’s a song of that ultimate symbol of freedom, the cowboy, yet it’s tinged with melancholy as those days pass more and more into memory. Next up, we drop in at Sleepy Joe’s Café which has a mariachi beat to it, as the wanderer stops off  at a diner on the highway, those eateries that cater for the transient, the passing through, and  a place for locals to dance on a Saturday night and meet lovers who will be gone in the morning.

Drive Fast is the tale of a stuntman who lists his injuries like medals won and delves into the classic Springsteen trope of the American fascination for cars, that love of petrol and speed. The stuntman tries to figure out if his life path was worth it, tries to explain to a loved one why he does what he does, but in the end, it comes down to the refrain “drive fast and fall hard.”

Chasin’ Wild Horses is an elegiac number, the acoustic guitar backed with violins and Springsteen’s voice imbued with too many mornings, too many long nights, too many long roads.  Here we have another tale of a wanderer, but this time there is regret at just taking off after a temper lost and chasing wild horses, all those goodbyes never uttered.  A steel guitar wails mournfully at the end of the song to accentuate the regret of always moving on. Sundown has shades of Bacharach whilst Somewhere North of Nashville is a short, moving song that sits at the side of the road, outside truckstops and laments to us as we pass by, as we hear only a snatch of verse. But the song remains in the mouth of the singer. The song remains the same down the ages, just those who pass it on, pass away.

Stones is another big cinematic feeling song about living with lies, whilst There Goes My Miracle (a classic Springsteen song title if ever there was one) has an upbeat feel to it, like a 60s pop song with big orchestration.  You could imagine some troubadour singing this on prime-time Saturday night TV, swinging snake hips and whipping the mic lead, in a suit, natch. Hello Sunshine starts with a very cool drum pattern with a driving, chugging sound. It’s a song about the traveller deciding to leave the rain, the walking shoes, the blues, the lonely road before he himself becomes lonely, and settle down in the sunshine. It’s a big, lush record with a 70s feel of grandiose themes and larger than life characters.

The album ends with Moonlight Motel. It’s an achingly beautiful elegy to a forgotten hotel on a road no-one travels anymore, with a vandalised pool and chain links rusted away, with warning signs to keep out. But it’s become a place where kids hang out, a place to spend a lazy afternoon amongst the wilted flowers. It’s nothing but an empty shell now and a place that nobody travels to. Is it a metaphor for what happens when you stay in the same place for too long, or a metaphor for everything having a second chance, even if it’s just kids playing in the ruin of your life? Whichever, the singer pours out one more shot for the Moonlight Motel.

With Western Stars, Springsteen covers familiar territories. It’s both the American dream and the rock n roll dream which are entwined with the spirit of freedom – almost a sacred, religious belief within Americans – even when they don’t see the dichotomy in bringing freedom with a gun and liberating people who don’t want liberating. He is a master at pinpointing the small moments of people’s lives that are gigantic to them. It turns the mundane into something meaningful and spiritual. Yet behind it lurks the dark nihilism that has haunted Springsteen’s own life (his battles against depression are chronicled in his autobiography).

Western Stars gives us slices of Americana, of loneliness, of canyons and prairies, truck stops and metal and gas, horses and lost dreams and melancholy hope, of an elegiac beauty in decay and forgetfulness. Of death and rebirth. Springsteen still has the power to make beauty and myth out of rock ‘n’ roll. Long may he do so.