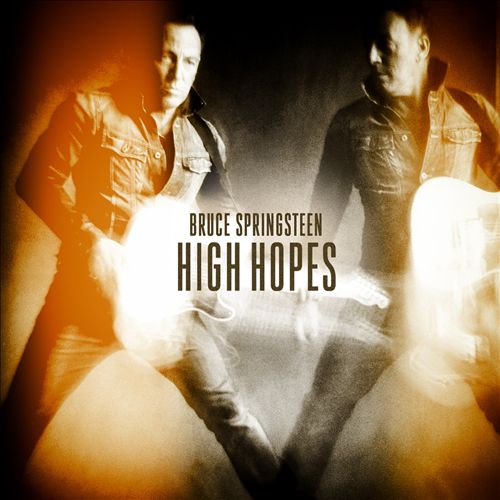 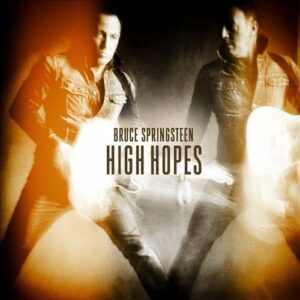 High Hopes is a strange album for Bruce Springsteen. Famously known for his perfection and control, this album of re-worked songs, covers and tracks recorded on the fly as he toured the world lacks the cohesion of most of his releases. Maybe, in this stage of his career, The Boss is happy to release more of his output without the fear of what it might do to his career. In other words, he is in that enviable position of being able to release what the fuck he likes.

The album heavily features Tom Morello of Rage Against The Manchine, who,  as part of the E-Street Band in Australia, persuaded Springsteen to add the cover of High Hopes to the set and, in Springsteen’s words: “Tom and his guitar became my muse, pushing the rest of this project to another level.”

The title track opens the album, a cover of a The Havalinas song. It starts with a staccato machine gun drum beat before bursting into a lively rocker. You can see why Springsteen was attracted to the song, with its lyrics about hope in hard times. Indeed, the album as a whole covers familiar territory for Springsteen, with stories about working men and hard times, but it’s clear that Morello has also had an influence with his common man politics and hard guitar riffs.

High Hopes is one of three covers on the album. The closing track is a wonderful version of Suicide’s Dream Baby Dream, turning a stripped down electronic number into a mantra of hope. Springsteen has always been a big fan of the proto-punks. Perhaps, more surprisingly, there is a cover of The Saints’ Just Like Fire Would. It’s a workmanlike cover, nothing more, but don’t let that put you off tracking down the classic I’m Stranded album. Indeed, if this album does nothing more than make you buy copies of that and Suicide’s first album then it’s done your ears a great service.

The two re-worked songs are The Ghost of Tom Joad and American Skin (41 Shots). The latter was originally written about the 1999 shooting of Amadou Diallo by New York police, but is now also dedicated to Trayvon Martin. Nothing changes. It’s a haunting song that remains in the memory, particularly the lines from the mother telling her son how to behave if he’s stopped by the police, because: “you get killed just for living in your American skin.” You might balk at millionaire rock gods preaching about the problems faced by young black men, but Springsteen is the real deal, and the only mainstream rock and roller who still gives a fuck.

The Ghost Of Tom Joad is a song for the dispossessed of America, taking its inspiration from Woody Guthrie and Steinbeck’s The Grapes of Wrath. It’s the American tradition of the underclass taking to the roads to migrate to somewhere better, just over the horizon. Except the horizon keeps getting further away the more you move towards it. It’s an 8 minute classic, with Tom Morella cranking out the guitar.

The album takes in gospel (Heaven’s Wall), Gaelic (This Is Your Sword), blues-rock (Frankie Fell In Love) and even what sounds like electro-funk on Harry’s Place. The latter is a great song full of lyrics about street characters – in this case gangsters, and their no nonsense attitude: “You don’t fuck with Harry’s money/You don’t fuck Harry’s girls/These are the rules/This is the world.” It also has the bonus of the late, great Clarence Clemons on sax.

The highlight of the album is The Wall. Springsteen says: “It was inspired by my memories of Walter Cichon. Walter was one of the great early Jersey Shore rockers, who along with his brother Ray (one of my early guitar mentors) led The Motifs.  The Motifs were a local rock band who were always a head above everybody else. Raw, sexy and rebellious, they were the heroes you aspired to be.” Cichon went missing in action in Vietnam in 1968 and Springsteen wrote the song after a visit to the Vietnam Veterans Memorial in Washington DC, where a long black wall lists the name of the deceased. It’s a haunting lament. Great songs raise the particular to the universal, and The Wall reminds us that there is no glory in war, just sorrow, loss and names on a long black wall: “You and your rock and roll band/Was the best thing this shit town ever had/Now the man who put you here/He feeds his family in rich dining halls/And apology and forgiveness have no place here at all/At the wall.”

High Hopes may not be Springsteen at is best but there are some real gems here. Anyone who has a love for rock should always be grateful for him. Somehow, through all the hits, stadium tours and money, he has kept his edge and his belief in the working man and the downtrodden. When he hangs up his guitar it will be as one of the last great rock and rollers. Enjoy him now.