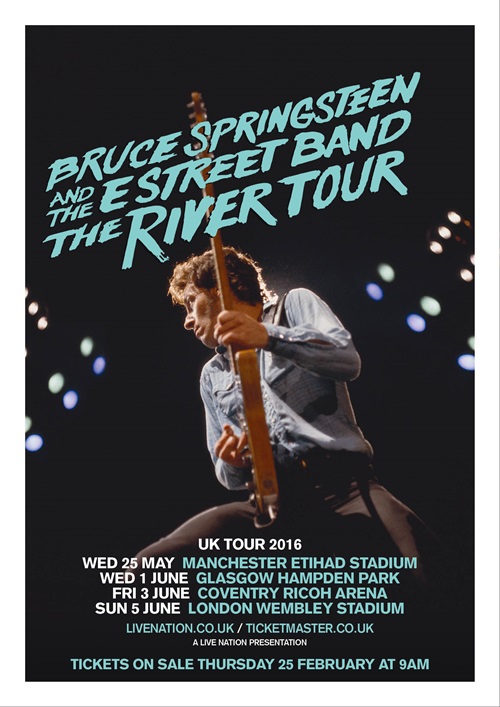 There may have been trouble in the heartland in the past week with all manner of managerial revolutions across the city at Old Trafford, but for one night only, the ‘special one’ was over at the home of their noisy neighbours. From the badlands to the Eastlands, Bruce Springsteen turned  the Etihad  into his own little patch of New Jersey.

An outdoor gig in Manchester in May is chancing your arm. A fine drizzle – what Peter Kay calls “that rain that wets you.” The grey sky looking ominous and the stars and stripes on the stage scaffold hanging in limp submission  to the Manchester weather and the opportunist poncho sellers doing as good a trade as the merch stands.  Was it going to be one of those outdoor shows where Bruce Springsteen was again going to dust off Creedence Clearwater Revival’s  ‘Who’ll Stop The Rain’? But as the man said “Rainy Manchester! Again! We wouldn’t have it any other way!” 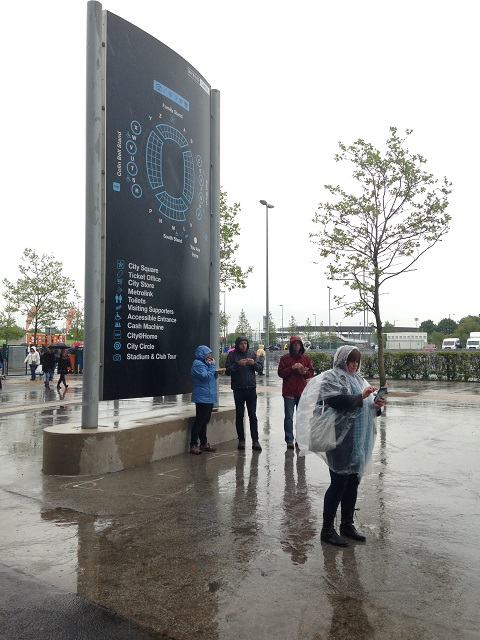 Uncannily, it’s almost exactly 35 years since Bruce made his Manchester debut – the 13th and 14th May 1981 at the Apollo on the back of the release of  ‘The River’ album and his first real European jaunt. Those with a long memory may recall the second of those dates being a mere 24 song set with Springsteen in poor voice. The current ‘The River’ tour which has been touring the US arenas has found  itself slightly tweaked for the European stadium jaunt. A full run through of all 20 songs on ‘The River’ has dried up  to a trickle of a stream in the stadiums of Europe. From kicking off his US tour with full performances of said album, the  Europeans get a slimmed down version. Bite sized chunks showing that it’s about quality over quantity.  Perhaps the outdoor stadia aren’t the venues for  full album performances although he’s done it with several albums in the open air in the past – ‘Born In The USA’ start to finish in the Olympic Park back in 2013 and in 2009 he went through a phase of full album shows at Giants Stadium.

Of course, committing to playing an album in full opens up the can of worms with the commitment  to include tracks which might be considered lesser songs or just ones which might come across better in a more intimate indoor setting rather than maintain the attention in a huge open air stadium – ‘Stolen Car’ and ‘Wreck On The Highway’, both essential staples in the flow of ‘The River’ spring to mind. In comparison with the mighty ‘Point Blank’ and the title track, you have to also contend with the throwaway frat of  ‘I’m A Rocker’ and the one which never did sit easily,  ‘Drive All Night’ and the quest for some new shoes.

So it is that a third of the set remains devoted to songs from ‘The River’ and with nothing from the most recent  three albums, the set is free  to perm any 15/20 songs from a back catalogue to die for and of course throw in a few curve balls and respond to all the placards now ritually held aloft whenever he ventures towards the walkways. The  4.30pm doors and 6.30pm (he came on at 6.50pm) showtime saw the band arrive onstage to the sight of a far from full stadium, fans drifting in all through the first hour of the show, yet by the end of the show, the spectacular scene of a fully lit stadium full of colourful showerproofs and raincoats might not have been enough to warm some chilly cockles, but pushed  the atmosphere needle towards the red.

And when he comes out and opens with a brooding ‘Atlantic City’ straight into    the first curve ball of the night on a devastating ‘Murder Inc.’ and then the fist punching ‘Badlands’, it’s possibly as good an opening burst as you could hand pick. You can see why they call this the best show in rock and roll and why fans queue two days ahead of the gig to be that few feet closer to touching the hem of his jeans. Talking of which – there won’t be many who will forget the fan dressed as Santa making an appearance in May, least of all him; not only getting his request played, but getting to join the band AND erm, ‘sing’ along onstage. Yes there are the lucky fans whose day/life is made by getting up onstage to do the Courtney Cox role in ‘Dancing In The Dark’ and the youngster he always finds for ‘Waiting On A Sunny Day’ – you can imagine the excuse when they’re a bit tired at school the next day…

Aside from a mid set lull – if you can call ‘The River’ and ‘Point Blank’ a lull – change of pace may be more apt, three hours plus of a virtual non stop ramrod of a battering  complete with walkabouts up and down and round the ramps is a decent workout for anyone. Occasionally accompanied by E Street sidekicks, Steve Van Zandt is the main foil these days;  how often does Bruce call “C’mon Steve” for his pal to join him at the mic and Jake Clemons, born in the year of ‘The River’s release,  reproduces Uncle Clarence’s memorable sax set pieces as well as bringing down the average age of the band. Nils Lofgren, possibly secured the prize as the unluckiest man of the evening. Known in the past for including a small trampoline as part of his act, he was less fortunate in  losing his hat on one trip with Bruce into the crowd during the ‘Honky Tonk Women’  influence of ‘Darlington County’ and also going, for want of a better term, arse over tit, falling backwards over a monitor during ‘No Surrender’. Fair enough it was funny, his gymnastic skills from his past and the way he simply rolled back to his feet without missing a note  probably saving him and Bruce a health & safety tallow card. If nothing else, it fired him up for the solo to end all solos on ‘Because The Night’. 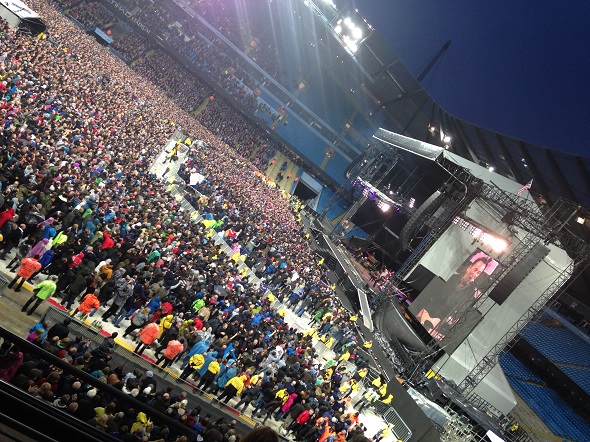 There’s a hymn like quality to the combination of ‘The Rising’ and ‘Thunder Road’ and  barely a breath before a six song encore with a glorious  ‘Backstreets’ – Roy Bittan’s fingerless gloves braving the cooling night and deftly tickling those ivories – and the mash ups on ‘Born To Run’ and ‘Glory Days’ keeping the momentum fully charged. Starting the celebration in earnest in a fully lit up stadium,  you could quote lines from his songs at will, magic in the night indeed,  fifty odd thousand souls all declaring with an passionate intent that they were tramps like us and they too were born to run.  But despite the bravado, you can’t deny Springsteen  ending the show on his own, just harmonica and  acoustic guitar– the one as a young man he learned how to make talk – all against the backdrop of his own giant image.

Some fans may have baulked at the ticket prices, but many if not most, countered with the not unreasonable argument that an evening with Bruce Springsteen is priceless and well worth the big bucks required to worship at the altar of Bruce.  Some may argue too that the fire in his belly might not rage as intensely as it did when he was a young thirty something back in the original ‘River ‘ days, but with his loyal band of E Streeters , he gave the 2016 readings of the River material and beyond, a compelling stately elegance,  burning as brightly as he ever did.

You can find Bruce  on the internet here: www.brucespringsteen.net

All words and live iphone-ography  by Mike Ainscoe. You can find more of Mike’s writing on Louder Than War at his author’s archive and his website is www.michaelainscoephotography.co.uk