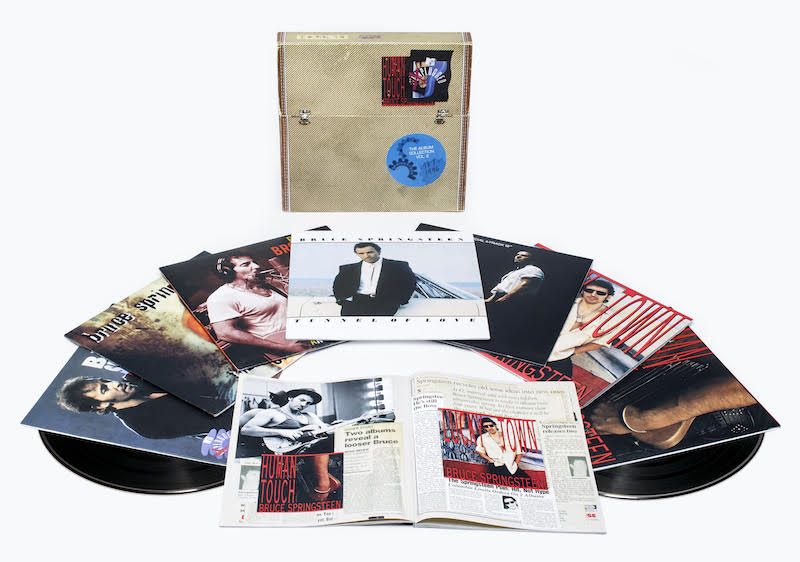 A collection that covers the period when Springsteen took leave of E Street to follow an alternative path with mixed results.

Of course we don’t get to sample the full artefact – Album Collection 87-96 will be  music that Springsteen fans everywhere will have on their shelves and burned in their brains,  so shelling out what will be something like a ton and a half seems excessive for a vinyl collection with the usual booklet and box. Not a great start really.

It‘s also a collection  that rounds up a period which fans view with slightly less of a New Jersey rose tint. A timely chance to reappraise what at the time was both controversial and quite shocking to the Springsteen community, not least his closest musical friends, the incomparable E Street Band, who found  themselves suddenly redundant as their leader looked to do something different.

The signs were already there. The massive global success of Born In The USA that elevated Springsteen to global superstar of gigantic proportions. The backlash surfaced in the Tunnel Of Love album. Newly married but struggling to come to terms with his new status, the evidence in the introspective outpouring of songs on Tunnel and ones that relied less on his regular bandmates, and more on his own subtle  sonic explorations.

Admittedly a personal favourite, there’s a glimpse of the old  fire in Spare Parts but TOL gave way to a more revealing and autobiographical  self analysis  in the likes of One Step Up (and two steps back)  and Brilliant Disguise. A couple of massively underrated confessionals  come right at the close with the introspection of Valentine’s Day and When You’re Alone; songs that only ever saw the light of day in live performance in some of his later period solo shows.

Having still rocked the stadia of the world with the E Streeters on the tunnel Of Love Express Tour, an early nineties  double whammy, Use Your Illusion styled two album release came to pass with Human Touch, an album he’d typically  pored over, perhaps questioning his ‘new’ E Street-less direction. It was combined with  Lucky Town,  knocked out with less of the agonizing that regularly accompanies and delays the release of Springsteen’s work. Both have merits – the more lush production of the former giving way to the rawer takes on the latter.  The stomp and fire again occasionally bit with the visceral Living Proof the prime example and the live shows with the ‘new’ band saw a thankful return to more manageable arena shows, the European ones in a format that kicked off with a salvo of solo Bruce with an acoustic guitar, one that possibly gave way to…

The MTV Unplugged experience – one that Springsteen was prime for yet he still managed to spin the concept  on its head, taking on MTV  on his own terms and becoming unplugged. Having said that the deliciously saucy, some would say openly sexual,  Red Headed Woman kicks off things with a swing before he showcases his band for the watching millions to come to the conclusion that the experiment was an interesting one but no more than a necessary diversion.

The acoustic openings he was doing on tour may or may not have been the trigger, but the next shift as he toyed with his muse,  was the solo acoustic collection of narratives on The Ghost Of Tom Joad. Going back to playing solo and exploring deeper and darker narratives first encountered on Nebraska over a decade ago, the stripped back Bruce was the perfect antidote to the absence of his E Streeters. Although the scraped back hair and goatee beard may not have been his best look, the songs on Tom Joad, including the title track, are Springsteen at his story telling best, as he builds up characters who might be found lurking in the darkness on the edge of town. Perhaps, nay decidedly, the pick of this collection.

The studio albums are topped off with vinyl versions of a couple of EP releases. Chimes Of Freedom EP with some live cuts including an acoustic Born To Run – another shift on the Tunnel Of Love tour and the stunning Chimes Of Freedom from the Amnesty International Tour. The Blood Brothers EP closes off the square with music from the 1999 E Street reunion era with the emotional ballad Blood Brothers in contrast to finally laying on record  the startling BITUSA outtake, Murder Incorporated.

Back to the future, we find the man himself  again doing things differently, reinventing the package  as he approaches the grand old age of 70, and currently engaged  in a lengthy Broadway run where the ticket application and pricing seems to be beyond the bounds of belief. In context and in hindsight, the diversions of the late eighties/early nineties, seem to be more logical.

What’s undeniable is that   Springsteen has built a  legacy where he can’t ever be accused of treading the same old path. Fortunately, he continues to be open to the re-evaulation of  his own work with expanded packages as he rediscovers his earlier albums. The most recent has opened up his archives from The River period with a stunning package that rates up with the similarly expansive look at what lay below the surface of the giant iceberg that was Darkness On The Edge Of Town. It feels like repackages such as this, despite the quality of some of the contents,  seem pretty superfluous.