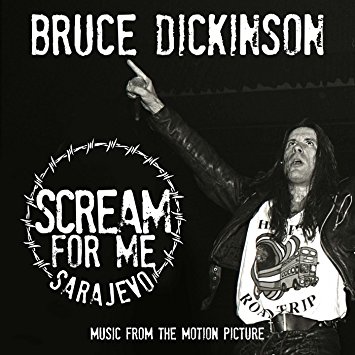 SCREAM FOR ME SARAJEVO – music from the motion picture

A recording, in fact the soundtrack to the film, of a legendary gig from 1994 – also available on DVD – undertaken by Iron Maiden singer Bruce Dickinson in his solo years.

“These are the pictures, this is the feeling from the front line.”

In fact if there were anyone who you would have to put money on to visit a war torn country to play a gig, there would be pretty short odds on the multitasking Dickinson, ever inqusitive and probing to go further and do things that musicians just don’t do.

Accompanied by his mid nineties Skunkworks outfit, Scream For Me… documents Bruce Dickinson’s show in Sarajevo in 1994, a city undergoing the longest siege in the history of modern warfare. As well as documenting the show, the film showcases the still thriving underground arts community,  amazingly still active even during the times of war. It also sheds light on the people of the city, their suffering and the impact of the efforts of Dickinson and his crew. Already a winner of awards at the Sarajevo Film Festival and Chicago International Movies & Music Festival, Scream For Me… is a result of triumph in times of adversity. Music once again providing the unity for so many ravaged souls.

The soundtrack album picks up on music from the film, tracks spanning the Dickinson solo career including a couple of rare performances for good measure. On the one hand it provides a release yet also seems so insignificant in the bigger picture. In part it fulfils some of his acoustic leanings for which he got short shrift in Maiden and as a soundtrack, it does have the feeling of being slightly removed from the context.  You’ll need to go to the film to get to the  real issues and fully understand the magnitude of the accomplishment as the documentary style perfectly puts things not just into context but also into perspective.

There’s more about it,  a full chapter no less devoted to the experience from Bruce’s own point of view, in his What Does This Button Do? autobiography.Well worth a read to complete the whole package.

Bruce’s Website with further links to the film is  here