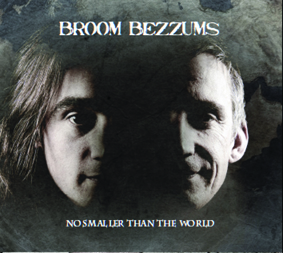 Broom Bezzums – No Smaller Than The World

Released in Germany last Autumn and already winning the German Record Critics’ Prize in the singer/songwriter /folk category, the UK now gets to hear the new release from the intriguingly named Broom Bezzums.

A band which also boasts the  uniqueness of being Germany’s most famous English folk band. Being based in Europe doesn’t disguise the fact that the Bezzums – Andrew Cadie and Mark Bloomer – have their origins strongly rooted  in Northumberland and the Black Country. Once again the duo are joined by long time vocal collaborator Katie Doherty who also contributes ‘Passing Through’ on the songwriting side.

The pair cover  a wide range of instruments between them – trumpets, pipes accompanying the usual suspects of guitars and fiddles – and Mark occasionally gets to work out on the full drum kit of his youth (a member of chart toppers Babylon Zoo). They also pitch in with a fair share of original songs going all country blues at the start with ‘Cold Winds Blow’ almost at times reminiscent of the sort of appeal which earned mid period Fleetwood Mac major status. The gorgeous ‘Down By The River’ contrasting sharply with the subject of  bare knuckle fighting on Jez Lowe’s ‘Bare Knuckle’ as an analogy for hard graft whilst visiting the plight of the working man on ‘The Drawbridge’. ‘Keep Hauling’ sounds a very traditional  sea shanty   despite being a Cadie original and highlights the stunning harmonies between the three

The tunes sets are bob on the mark; while they’re not averse to veering towards  something more calming and tranquil,  ‘Ashgill Force Rant’ is a real understated toe tapping trouser swinger with an Irish slant while   ‘Hen In The Pen’ makes a feature of  the pipes coming across with a very Celtic vibe. A mid album pair of traditional songs provide an interesting combination of the two cultures Broom Bezzums straddle  – the aptly titled  ‘High Germany’ and Northumberland’s ‘Bonny At Morn’.

Besides covering  Jez Lowe, the album ends  with ‘Way Down Yonder In A Minor Key’ –  Woody Guthrie’s words set to music by Billy Bragg – and perhaps the highlight of the record. Yes, it’s a high profile pair of names which draws the attention, but it’s accompanied by a performance which is genteel, lilting and full of expression.

While  BB retain the notoriety of being  an export which has found a niche in Europe for their folk explorations, there’s simply no denying their roots. ‘No Smaller than The World’ stands as another testament to their place in the best tradition of English folk music.

You can listen to the album trailer  here: