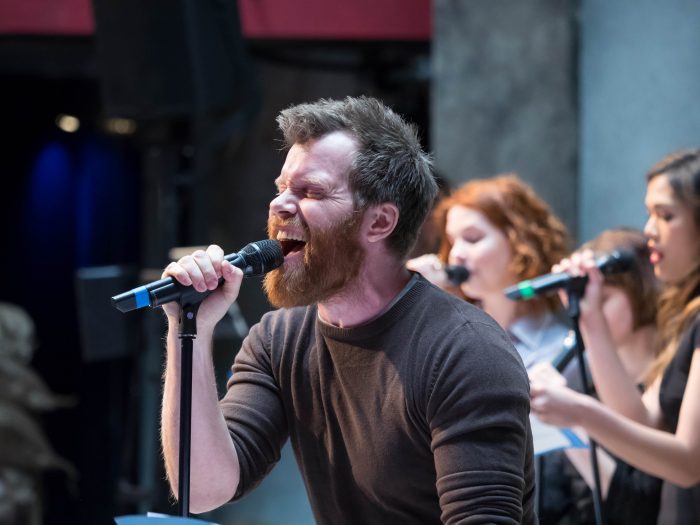 The Bronte sisters were the ultimate girl gang who lived fast and died young which is why the creators of new musical Wasted are using rock music to tell their tale.

It’s not hard to imagine the doomed sisters as The Runaways in bonnets as they rebelled against the sexist social straitjackets of their time. Writing partners Christopher Ash and Carl Miller set their new show set in the 1830s and present it as a work in progress at West Yorkshire Playhouse hoping to attract rock fans and Bronte diehards.

“Wasted is a musical rockumentary about the Bronte siblings telling the story of their lives and as much of how they created the books as we can fit in,” says Christopher Ash. “There lots of other details like how they grew up and the love affairs for Charlotte and their brother Branwell in a way that is accessible using a rock perspective.”

The idea come together over a coffee at the Edinburgh Fringe when playwright and lyricist Miller said to experienced musical director Ash why don’t we do a rock musical about the Brontes? Ash’s ears immediately pricked up thinking the daring reinvention of a story full of brilliant words and death might actually work.

“Carl pitched it to me that there is a received wisdom in how they are seen in classic English literature, but if you scratch beneath the surface you don’t have to go that far to find they had a raw, visceral existence which allows us to use the music in new and unexpected ways.

“Many musicals at the moment are trying to do this with Hamilton being the one everybody is talking about. We’re not just doing Hamilton, as that is quite an old trope, when you consider Jesus Christ Superstar is as old as the hills and that is doing much the same thing.”

Neither writer would profess to be rock experts so when they went off to look for inspiration they didn’t have look very far to find smart and brilliant women battling to get their work heard in a world dominated by men including early punks like X Ray Spex’s Poly Styrene or Siouxsie from the Banshees.

“In the research we looked at things like the Riot Girrrls and I think our idea does work as the Brontes were young women expressing themselves in an honest way that did shock society in a very real way.

“The interesting difference is that punk was setting out to be provocative and challenge people whereas certainly with the first few Bronte books they had no idea they would actually get out there. They were these glorious freaks who didn’t in fit, although they tried to get respectable work and have normal lives, but it just didn’t work.”

Everyone thinks they know the Bronte story but Ash and Miller have them holed up in their dad’s vicarage in remote West Yorkshire facing a bleak future before they form a punk band to get their voices heard.

“Our spin is they all back in Haworth thinking where are we going to get the money to run this Parsonage? None of them had thought of making money out of the writing which they had just grown up doing, but then Charlotte gets them to publish some poetry.

“The band analogy is that Charlotte is the kind of the person in every group who is sort of the manager going ‘come on guys when are we going to rehearse’ and has a business brain. Charlotte is saying you know if we do this we will never have to be governesses again with those terrible rich kids being awful to us.”

Another novel twist is the sister’s wayward but charismatic brother Branwell – think Poldark on the Yorkshire Moors – is a central character as he rampages around the Dales causing chaos. Branwell was expected to be the superstar of the family, but his own demons ended up destroying him.

“We’ve had so much fun delving into his role and the tragedy of his life,” notes Ash. “In a way he ticks lot of the more obvious rock and roll boxes like the drug addiction and his affair with local landowner Mrs Robinson so there is sex and drugs in it. But what if the sisters had wrestled him back from the depression and addiction would their books have been written in the same way or at all?”

All musicals take a lot of effort to get off the ground but Ash and Miller got a lucky break when the Playhouse agreed to include them in their Bronte season marking 200 years since Charlotte’s birth. Next stop was getting some funding which came via a two time Oscar winning Hollywood legend.

“We heard about the Kevin Spacey Artists of Choice award which offers coaching and mentoring which is what we needed. They have given us ten grand and a year’s worth of mentoring to help us take this forward.

“The show we doing at the Playhouse are like our demo tape of where we have got to with our brilliant young cast. The exciting thing is we haven’t finished so when people come long they can have an influence by tweeting us or tell us want they think as we are still writing it.”