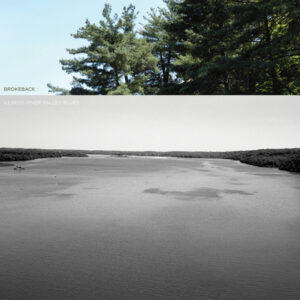 Brokeback is the outfit that guitarist/bassist Douglas McCombs of post rock pioneers Tortoise first launched back in 1995. Since then they have been creating laid back minimalist instrumental landscapes that frame the evocative ‘open-road’ feeling of crossing unknown territory and thus charting out new sonic territory.

‘Ride Ahead and Light the Way For Me’ starts off this album and it’s mean and moody atmospherics sets the tone for the whole piece. Impeccable guitar playing combine to create great emotion and drama. ‘Cairo Levee’ is again moody and atmospheric, but is also kinda funky and playful!

‘The Canyons of Illinois’ is again awash with gentle guitar picking to create another atmospheric piece. ‘Andalusia IL’ starts off with almost calypso/surf rock guitar and has a very playful feel to it. ‘Spanish Venus’ starts off with some gentle ‘brush’ drumming and incorporates some nice Spanish guitar. The track has a very jazzy feel and the band seem to revel in it.

‘On the Move and Vanishing’ takes in lots of influences. Jazz, country, Americana. It’s a very schizophrenic track that ultimately sums up the whole album! The virtuoso playing on show here can play any style of guitar led music they want. And again this shows in a track like ‘Ursula’ that is slow and measured, but yields to a noisy finish.

‘The Strollers’ Memorial’ is a really upbeat track. Probably the most upbeat track on the album! Final track ‘Night Falls on Chillicothe’ is another wistful and melancholic track that takes you places you may not want to go.

Illinois River Valley Blues is an atmospheric and moody LP that conjures up myriad feelings of wistful nostalgia and reflections on both the ‘open road’ and the 9-5 drudge. I admit it is beautiful and at times sublime, but the tempo and overall feeling you get from the album is one of melancholy and this is pretty hard going if i have to be honest. The musicianship is second to none, but the overall effect? I was (even more) depressed after listening to it. Great stuff, but you definitely have to be in the right mood.

Brokeback can be found via their Facebook or label.