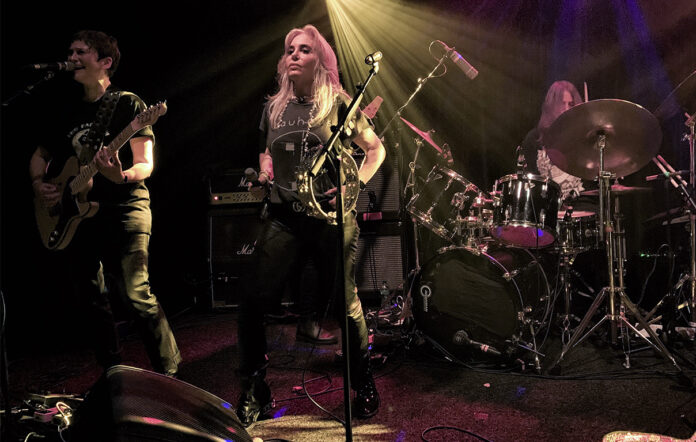 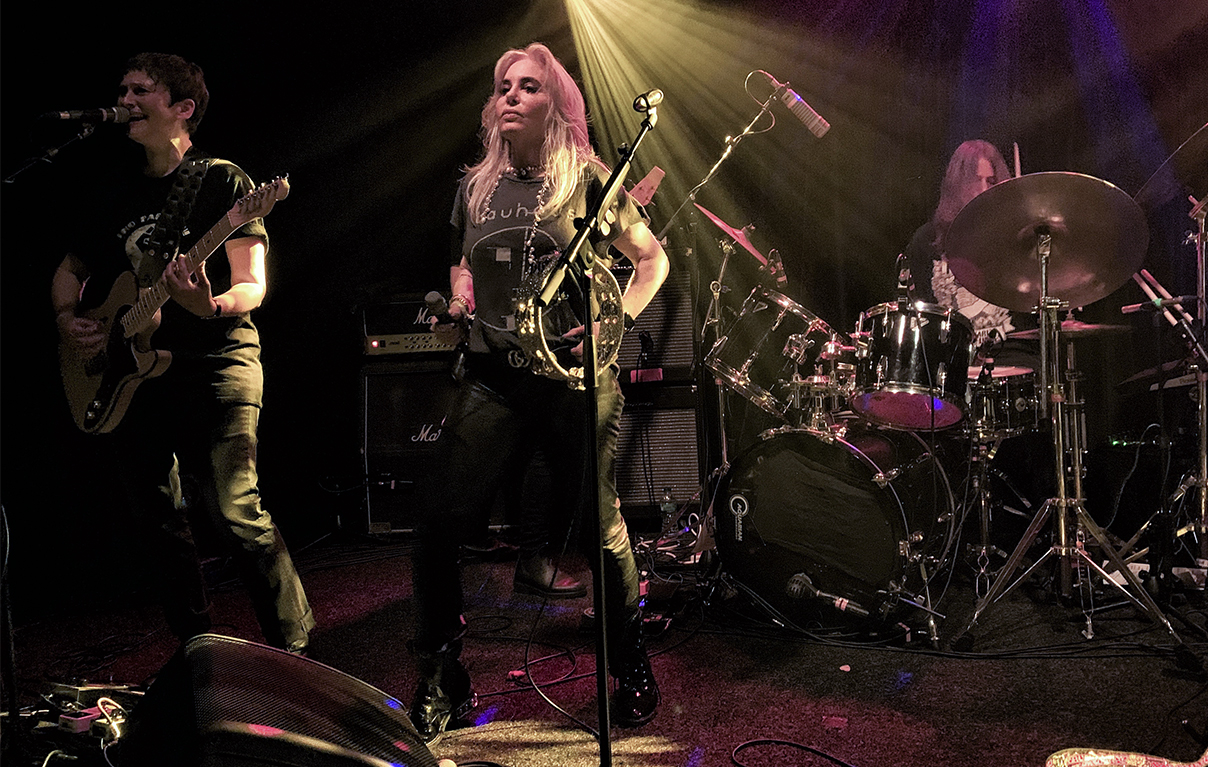 Brix Smith is finally back on the stage after the extended hiatus caused by lockdown, this time with a stellar new band and a new batch of songs co-written with Youth to bolster her already extensive repertoire. Ian Corbridge is there to witness her triumphant return to the Trades Club in Hebden Bridge which she regards as her favourite venue on the circuit.

The past couple of years have been quite a challenge for us all, as most of our freedoms have been denied us in the way that normal life usually allows. But out of all this adversity, there have been numerous positives and one of those was most definitely the release of the long-lost album, Lost Angeles, at the back end of 2021. This was a collaboration between Brix and singer-songwriter Marty Willson-Piper showcasing Brix’s magnificent songwriting talent and her penchant for strong melodies and harmonic vocals. Whist recorded in 1997, Brix never had the confidence to release such personal stories until now, but without question, that album stood up as one of my personal favourites of 2021.

But that is not all, as it now emerges that another huge positive to come out of lockdown is the collaboration between Brix Smith and the legendary bass player, producer, songwriter, you-name-it-he-can-do-it musician that is Youth. This is a partnership that has resulted in a whole batch of new songs that will hopefully start appearing through a series of singles and ultimately an album, Valley Of The Dolls. And tonight at the Trades Club in leafy Hebden Bridge is their first airing in front of a paying public.

The collaboration appeared to be facilitated by Youth’s production manager. Whilst they knew of each other, they had not met until Facetime brought them together with a view to writing some songs. And whilst Brix was in London and Youth was holed up in Spain, it became clear very early on that this was going to be a very productive partnership.

Brix explained mid-set that they started talking about what they were going to write about which then prompted Youth to send Brix some backing tracks. Brix then wrote the lyrics, the melodies and the top line of the songs, sang the vocals, layered the harmonies and sent it back to Youth. And so it developed until they finally had a chance to meet in person when further ideas were explored. Essentially it is an album born out of isolation and loneliness, but with a lot more besides thrown into the mix. More of that later.

The initial idea was to write songs for other people, but what emerged was a new solo album for Brix who had already signalled an intention to move on from The Extricated project and find something new. This is clearly that new project and, to support this, Brix put together an all-female group of stellar musicians, creating a whole new and exciting dynamic for Brix to work with, having previously always worked in a ‘mans-world’. Alongside Brix on guitar and vocals, we have Deb Googe on bass and Jen Marco on keys and guitar, both from My Bloody Valentine, and Ros Cairney on drums and Vas Antoniadou on drums, both from the fierce post punk duo Deux Furieuses. With all this in the background, I could feel a real sense of anticipation in the room as Brix and her band were due to take to the stage. 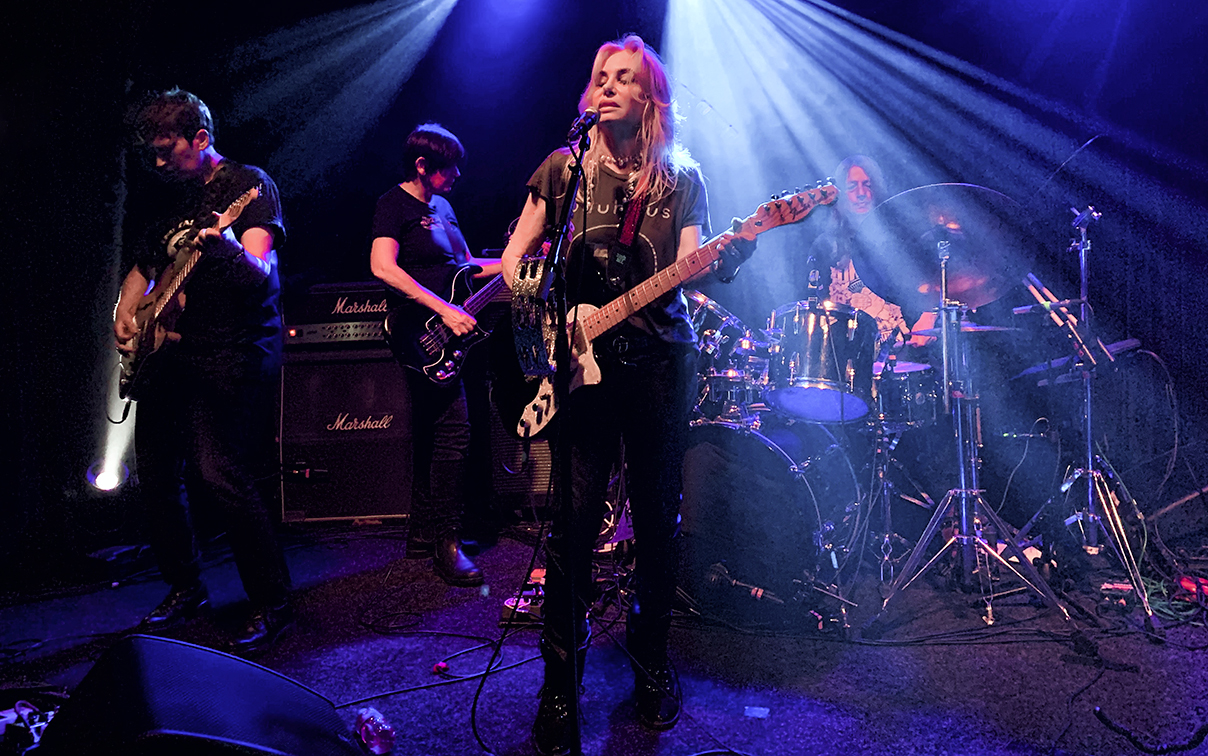 The first three songs in the set, Aphrodite, Fast Net and Black Rainbow Sky were all from the forthcoming album and were knocked off in quick succession. Brix clearly overjoyed to be back performing on stage again, a view also shared by myself and everyone else in the room. Songs full of angst, hard-wired attitude, and no small degree of introspection were infused, with a driving rhythm which is the very least you would expect with Youth being involved.

The next two songs are the first public performances of two songs from Lost Angeles. Backwards is a song full of charm set against a backdrop of a strong melody and guitar-driven psychedelia which tells the story of when Brix fell backwards into a cement basement at Bennington school in Vermont. As Brix explained, she still has the bald patch to prove it as well as the scars of migraine and depression which followed. But it seems she has also reflected often whether the impact of this fall led her to make the decisions that have shaped her life, and without it, would she have ever married Mark E. Smith or even be on stage in front of us now? Whatever the case, we are all so glad she is.

Little Wounds, also from Lost Angeles, is also strong on melody as it speaks of the scars you pick up in your everyday life which make you a stronger more empathetic person.

Brix took a further break to explain a bit more about the next few songs off the forthcoming album and their strong California connection. Brix observed how California is “packed with people who have had their hearts stamped on, who have failed and never feel like they are good enough”. Alongside this, there is racial tension, misery and violence all of which present a strong dichotomy with the gorgeous scenery that surrounds them all. Sometimes Brix is inclined to write about California reverentially, how she remembers it as a child but other times, how she sees it all now as a grown woman, observing it more as a dystopian landscape. All of this led into California Smile with its dark message hiding behind the bright jangly guitars which led into the song. 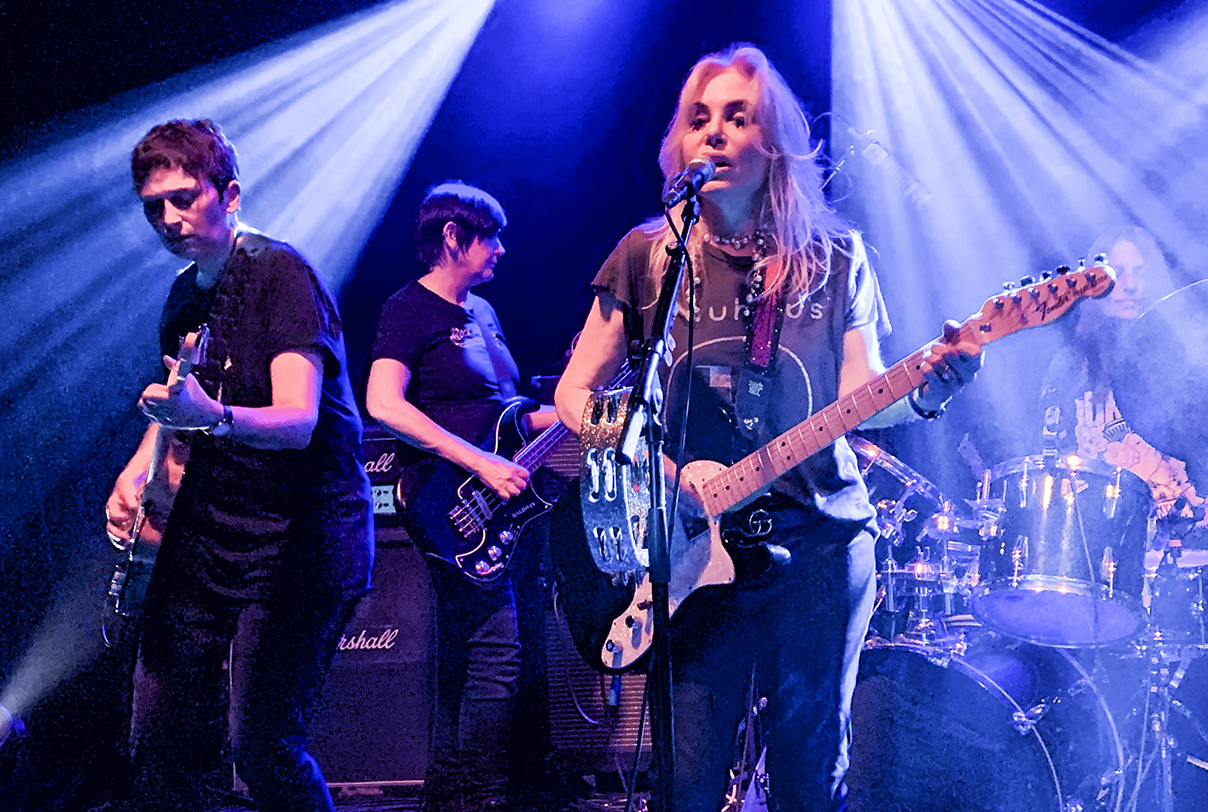 We then got a real change of pace through the slow charm of Changing, which was a break-up song but in a strange way still a love song. This is a song written with Youth in a studio in Spain in around 45 minutes. It is focused on those people who grow apart and who are brave enough to make a choice, walk away and start a new life and try to have faith again. Essentially a song about breaking up with grace and letting everyone go their own way.

All My Love upped the tempo again before leading into the punk-infused Living Through My Despair. This one focused on the time Brix spent living in Manchester, living alone, isolated with no proper friends, noting that no one she actually knew properly attended her wedding. However whilst this was a lonely time for her she recognised that it produced some great songs and her heart will always be “part Mancunian”. And this led very neatly onto a classic version of The Fall’s Totally Wired which was heralded by squalls of feedback and subsequently “dedicated to the late great Mark Smith who is completely here in spirit”.

Black Butterfly closed the main set in a slower melancholy mood as a song that initially fed off a sense of isolation and loneliness, which eventually evolved into one of transformation. As Brix explained, she feels we have all been transformed collectively by the experience of what we have been through over the past couple of years and are still going through. Black Butterfly is effectively the symbol of transformation as Brix sings “take me out of this reality, take me from this place of pain”. A song very much for the here and now and perhaps an anthem of our times.

Of course, we would not let Brix stop there and the band came back on for a rousing and melodic Say I’m Your Number One which must be a single contender in the future. And to climax the show, we were treated to a full-scale Fall style mash-up of New Big Prinz and Hip Priest, which shifted the focus back to the underappreciated and the underdog, in a piledriving glam stomp fashion. What a way to end the night and a great way to warm up for her support slot for Killing Joke in London two days later, featuring of course Youth on bass.

So Brix Smith is back in the fold, back on the stage and her ascendancy continues. From the evidence of what we have heard tonight the forthcoming album, Valley Of the Dolls is definitely one to watch out for so keep an eye out for the singles that start to emerge through the year.