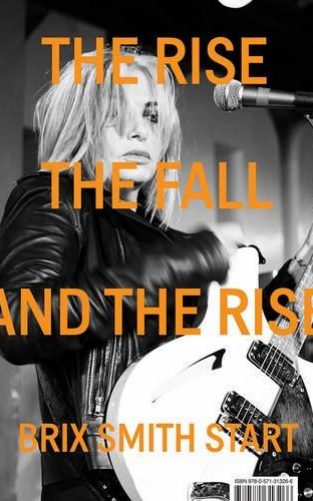 The Rise The Fall and The Rise

In the past couple of years Faber has revolutionised the rock book – for far too long the story of blokes and their cliched yet enjoyable last gang in town them against the world narrative. The locker room tales were first broken by Viv Albertine’s brilliant autobiography two years ago that is still the best book about punk you can get and then there was the follow up by Kim Gordon and now Brix Smith – not that there are in some kind of corny ‘rock chick lit’ series or deliberate ploy – just three random books of lives consumed by the bric a brac of pop culture but told in very different ways.

Brix’s book is a complex, emotional rush – full of rock n roll, broken hearts and spectral madness. It’s also a fantastically written tale of another life on the rock n roll rollercoaster with a pithy humour and great turn of phrase and looks set to be one of the music books of the year.

Brix Smith burst into our lives as an explosion of energy and glamour in the deliberately dour Fall with its deliberately acidic and self destructive frontman Mark Smith. She somehow turned the band into a chart band with her brilliant songs and great guitar playing that skilfully captured all the great grout of that band but added a shimmer to it – like they were the only underground band to ever crossover without going shit and that takes some skill and most of that skill was down to Brix.

That period of the book and it painful repercussions is at the core of the book but there is so much more to tell and its told very well. At last we get to find out where she appareared from and her own quark, strangeness and charm background that surely must have given her the inner steel to deal with the Manchester years. From the faded grandeur of sunny LA to the collapsed rainy Manchester of the early eighties before the city rebuilt itself Brix Smith has led a life.

Her breathless and beautifully written book captures this zig zag wander that saw her grow up in the nervous breakdown of the Hollywood Hills. Brix was born as Laura Elisse Salenger – the sun drenched California girl surrounded by the kooky weirdness of the city where the sun never gets switched off. Her grandfather was from Russia and invented the car wash there was money, madness and everything that damp Mancunians imagined about LA.

The city of angles is, as Brix observes with her love of Brit slang, ‘bonkers’ but it may have just been the start to a life that open like a book. She escaped the heartache lunacy of LA with her mother to start again in LA, became a keen anglophile immersed in UK post punk culture with her favourite song being Guns of Brixton that eventually lent her, her nickname ‘Brix’.

This keen love of UK culture saw her meet perhaps the most British band of them all – the Fall and ahem, fall in love with their idiosyncratic singer Mark Smith in a whirlwind romance that saw her move to Manchester within weeks to live with the singer and enter his interesting world.

The description in the book of her arrival in Manchester and the taxi journey through the then crumbling, yet creative powerhouse city, is pure poetry and captures a time and place that has long gone. The battered mills and rubble that somehow matched the Fall’s unique vision is described in perfect tumble of words and the uncertainty and madness in the Fall Arena is detailed with humour and sadness.

She escapes the Fall only to return to the band afew years later and then finally escapes again to marry violist Nigel kennedy and then fianlly marry fashion guru Philip Start who seems to have given her life a solidity that it always needed. They opened high fashion shops and she has became a fixture in the fashion world with her new husband and branching out onto TV detailing fashion and becoming a household name.

All the time there is always the undertow that was the music that was really her thing and the psychic damage of the Fall years is there for all to see but the redemption is that she has started the music again and tried to come to terms with a complex life and personality in a book that will cause bruises but is full of the stuff that has to be said and is said in acompelling flow of words that makes this one of the music books of the year.