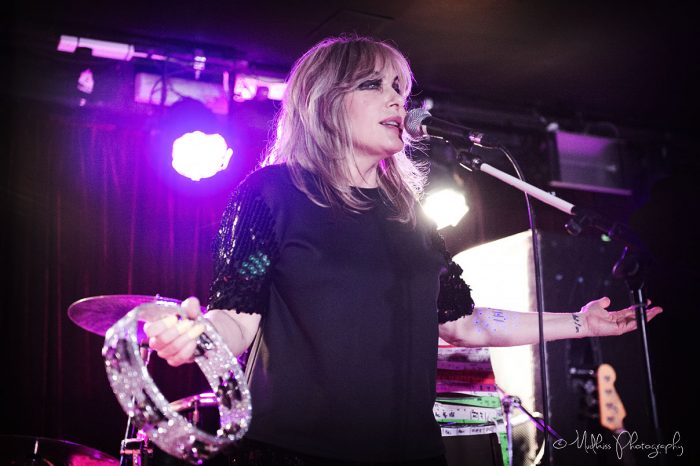 Brix and The Extricated
The Ruby Lounge, Manchester
13th May 2016

Brix Smith Start hosted a Q&A session at the Ruby Lounge on Friday night to promote her autobiography The Rise, The Fall and The Rise. She then took to the stage in the venue that has become her spiritual home. Nigel Carr (words) and Melanie Smith (photos) were there to capture the event for Louder Than War.

Brix pulls herself up onto one of the high stools in the back corner of the Ruby lounge surrounded by an eclectic bunch of die hard fans, photographers and reporters. She’s in conversation with Abigail Ward (Curator of the Manchester District Music Archive) talking about her book. 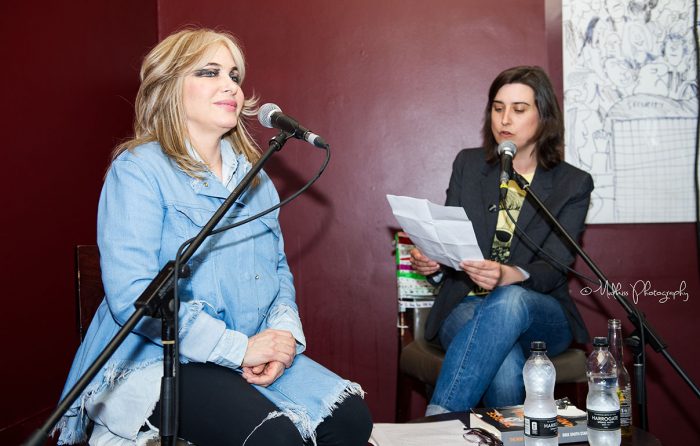 Regaling us with a couple of chapters that describe her walking around Disneyland with Mark E Smith and talking with Gary Linekar about his on pitch ‘follow through’ episode she has the crowd in stitches. She discusses her relationships with Mark E Smith and Nigel Kennedy, her love of early Joy Division, The Cure, The Bunnymen and US band The Gun Club and her ability to write a great riff!

She then takes to the stage in a black glitter two piece complementing the silver glitter guitar strap attached to her beloved Gretch guitar she’d named ‘God’. During the Q&A she told us how it had been retrieved from a Denmark St. guitar shop after being stolen on an earlier tour.

The band launches straight into L.A., which she co-wrote back in 1985, showing us just how her voice has mellowed and matured over the years. She has a cool, confident air about her, looking and sounding great on the low ceilinged stage of this packed underground space. 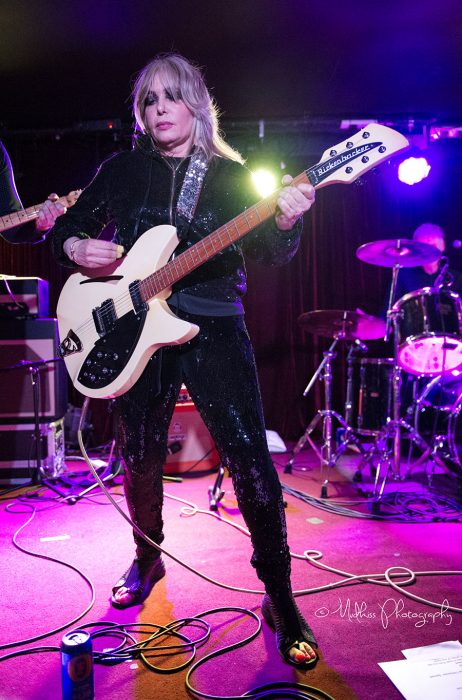 Brix and The Extricated wing you right back to the early eighties Fall sound, those jangly guitar licks, the driving bass of Steve Hanley and the ever so familiar drum patterns of brother Paul. While The Fall themselves have moved forward with their own tight, pumping rhythms, three of the ‘Fallen’, (as Dave Simpson referred to them in his book from 2009), continue to wow us with those primeval, eclectic and in some way naïve early beats. It really is like stepping back in time without Mark E’s incoherent slur over the top and his mischievous antics on stage!

Whilst the core of this set is early 80’s Fall – tracks such as Totally Wired with its perfectly British pronunciation, Lay of The Land and Feeling Numb with its nod to Bowie as it slides in to Rebel Rebel, there are new tracks as well. Something To Lose perfectly fits in to the set and reveals Brix as a writing force in her own right who can continue to evolve her band’s sound. Slightly rockier than the Fall tracks but really great and brilliantly executed.

It’s easy to forget quite how important Brix is to the riffs, melodies and structures of these songs. “You’ve all heard of the 10 commandments right?, well there’s one for today and it’s Thou Shalt Not Steal” she blasts from the stage, before launching the band in to Squid Lord which sounds remarkably like the new Stone Roses single, All For One. Nothing more is said until after the track when she screams, “Take That Motherfuckers”, her point clearly made!”

Brix encores with a couple of acoustic numbers including the first Adult Net single, Incense and Peppermints, supported beautifully by Steve Trafford’s amazing guitar work. Someone shouts “I love you Steve” and Paul answers sardonically, “Oh Get a room, Jesus”, before adding “You don’t get that at a Fall gig!” The band then launch in to Bombast and finally The Big New Priest, ending a truly memorable and amazing set.

This was a great gig for Brix, the audience loved it and there was a fair bit of slamming down the front. It sounded fresh and alive and just hearing those songs played again by most of the original perpetrators was pure joy. It was more than that though – it showed us a fresh direction for Brix and the band; powerful, punchy punk with the spirit of Manchester running right to the core!

Photos by Melanie Smith. More work by Mel on Louder Than War can be found at her author’s archive. You can find her on Facebook andTwitter. Photography portfolio can be found here and Flickr