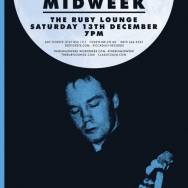 Brix and The Extricated

It started for fun.

There was a gathering of former Fall members at the launch of Steve Hanley’s excellent autobiography in the summer. A pick up band built around Steve, his brother- drummer Paul and former Fall keyboard player Una Baines hit the stage and everyone remembered just how good that rhythm section was- the Hanleys were clicking like a machine, the tough gnarl was back in the room and everyone hoped it wasn’t going to be a one off.

That night ttanding in the crowd and supporting her former comrades, Brix must have thought the same and within weeks the fallen were now risen with her fronting a smattering of former Fall faces including Steve Trafford for a band that has lots of life in it and has got to be far more than a one off exercise.

The bulk of the set is culled from one of the the classic Fall periods- the one when Brix was the glam foil to Mark Smith. This was the time of the hits and the big gigs and Brix’s added psyche pop fitting perfectly with the curmudgeonly northern blokes and somehow turning their grouty riffing into pop gold. Thirty years later these songs still sound timeless and Brix oozes pure joy as she fronts what must still be her dream band as they kick out the jams with much loved gems like New Big Prinz, 2 x 4, Cruiser’s Creak and whole host of Fall (en) classics.

They breathe new life into old songs and make no attempt to make any statement- this is a dusting down of the past and maybe a statement that the Fall was not just about its genius frontman but a cast of talented characters that were not just yer grannie and her bongos. Of course this line up is, give or take a few people (like a watching Simon Wolstencroft), the cream of the Fall Band crop and this is, hopefully, a starting point.

I guess it all make sense. With the glut of Fall based autobiographies doing the rounds and with Brix also rumoured to be readying her life account this delving into the archives is in vogue. The songs tell their own story though, and it’s one part fascinating to hear them live again with a Brix twist as the songs step from behind Mark Smith’s long shadow. It’s always great to see Steve Hanley hunched over his bass grinding out those glorious bass lines with his intense frame oozing the true spine of the Fall underlining the great tough bass player that he is.

Their may have been a couple of scrappy moments but this was  a debut gig and there was so much in the set that made you smile with pleasure. Strip away the history, strip away the context and this is a damn fine garage rock n roll band with a charismatic singer and with hopefully a plan to make this stretch out for more than a one off gig- and there is talk of more.

As Mr Pharmacist ricochets around the venue it’s just good to have them all back.