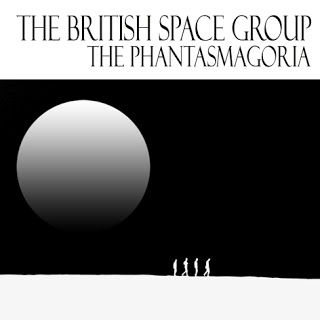 The British Space Group: The Phantasmagoria

Welsh sonic adventurer Ian Holloway gathers together for the first time the three EPs he has released under the British Space Group moniker. Simon Tucker reviews:

Ian Holloway is one of those wonderful explorers of sound that Britain is famed for birthing. Under his various guises he has released a number of projects all intent on making the listener think and delve into. Often uncompromising yet equally beautiful, his work is always something that we who like the outer-reaches of sound should investigate.

With The British Space Group Ian has used the canvas of science fiction as a base for his technological paint brush and in doing so has created his own world, his own narrative, and his own protagonists. The three EPs gathered here all represent different aspects of the characters that Ian has brought to life but who are linked by the Radiophonic DNA that courses through Holloway’s blood. The EPs focus on a group of characters led by a Thomas Carnaki, John Silence, Doctor Who type and follows a lose narrative arc with the second being inspired by Sapphire & Steel and the third an epilogue where our characters go on one final journey before leaving their captain there at the final destination. As these forty two tracks are purely instrumental it is up to us as listeners to put their own images to the audio but when the music is this thought provoking and cerebral the task is not that difficult. Most of what comprises of the music are more akin to soundtrack cues than straight forward songs so a lot of them are relatively brief in running time. This helps you project your own images onto the soundscapes a lot easier.

Throughout the collections running time we are presented with numerous emotional twists whether that be on the, frankly disturbing, cuts Light From Below (imagine a swarm of flies bothering a corpse) and One Last Unexpected Guest (a cue that piles on the tension and knots the guts with electronic glee) or the beautiful closer Home Again, Home Again which sends us off in a slightly melancholic but grateful mood.

With these EPs Ian has collected a wealth of material that deserves to be heard by all that love the esoteric and the magnificent. The sheer depth and breadth of the music here means you can guarantee repeat listens where you will always discover something new. A soundtrack anthology to a as-yet-unmade series of films, The Phantasmagoria collection needs to be in your collection.