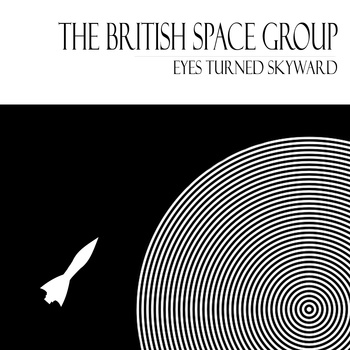 The British Space Group is the new project by musician and Quiet World label chief Ian Holloway and it sees him moving away from the more industrial, harsher sounds of his other works, into more atmospheric and ambient territory.

Eyes Turned Skyward is an album that draws you into its world subtlety but effectively, creating a world where sci-fi soundtracks and inner/outer space are explored and investigated to create something that sounds familiar but progressive, using genre specific benchmarks to embark on a new path.

Opener Remote Viewing seduces you in with a spoken word sample used to give the listener an immediate sense of where we are about to travel to. It (Remote Viewing) is a perfect example of an artist getting the running order spot on as it truly manages to get the listener into the correct head-space with its random bursts of dissonance and with the vocal sample slowly becoming more and more cut up/twisted you learn that there may be beauty to be found on this trip but there is also a sense of danger lurking underneath the surface.

The mood shifts over the next couple of songs as Haze Of Summer lurches and rolls along to a louche hip-hop beat and Slow Light twinkles and flutters with synth patterns anchoring us down creating a queezy but intriguing listen.

So far, so good but it is the next song, The Dust Between The Stars, that really shows the creators craft and skill for nuance and texture. At eleven+ minutes, The Dust Between The Stars is the albums centerpiece. It’s an ambient master class where repetition is king. It refuses to let you go and as your mind gets a hold of what is happening, more bursts of instrumentation are added throwing you back up before plunging you back down into the warm abyss. This is the moment the wave breaks.

For the rest of the album it feels like the author has declared that we have had enough beauty and light and now it is time to rummage around in the dark as songs such as The Work Of Fire (unsettling, abstract) Breathe During Sleep (layered, propulsive) and closer The Last Of Time (twisted beauty, esoteric) all maintain a sense of time and space whilst also making the listener question what is real and what is imagination.

With this album, The British Space Group, have created something that is a must-buy for those into the more thought provoking side of music. It manages to bridge the gap between 70’s sci-fi soundtracks and modern ambient/drone. It’s an album that plays like a short movie with each component vital to the story. It’s an album that must be listened to from beginning to end as each song represents a chapter in this most enjoyable story.

Let them take you on the trip, it’s a wild and enjoyable ride.

You can order Eyes Turned Skyward from Quiet World’s Bandcamp and / or you can visit the label’s website quietworld.co.uk and / or Facebook. The British Space Group are on Facebook too.