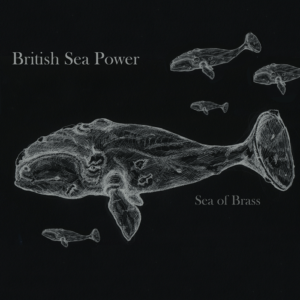 “Fucking hell, it’s funny. This sit-down gig: in-between the Odeon and Elvis, before he died,” jokes British Sea Power’s guitarist and vocalist Scott Wilkinson, adding with a hint of mischievous self-deprecation, “I’m trying some form of sophistication.” The setting is his band’s final brass-infused performance at The Barbican in London. Captured on video in January 2015, this audio-visual treat is part of a special box set edition of the long-awaited Sea of Brass, trumpeting its arrival on the band’s own Golden Chariot label at the end of this month.

Like all things associated with British Sea Power, the idea of reworking their compositions with orchestral support from traditional brass bands may at first seem entirely implausible. Nobody but BSP could have come up with it, let alone thought it was a viable proposition. The formulaic limitations of brass arrangements set against the fast-paced intensity of the “church of amplified rock music” make odd bed fellows. And, yes, the resulting sonic fusion is not a 100% success. In some cases the brass orchestra struggles to keep up with the band, and occasionally the band is drowned in a sea of brass. Yet, despite some imperfections, this valiant endeavour is yet another testimony to British Sea Power’s curious visionary genius and creative ambition.

The recorded album, featuring Foden’s Band from Cheshire, is the centrepiece of the extended box set. The starting point for this true adventure in sound is ‘Heavenly Waters’, a bonus track from the debut album The Decline of British Sea Power. With brass orchestration familiar songs acquire a sense of scale: the sea becomes an ocean, ebbing and flowing, breathing a sense of danger and bursting with exuberance. The contorted, fiery cacophony of brass and rock brings ‘Atom’- from the Mercury nominated Do You Like Rock Music? – to an epic sonic climax; and careful brass ornamentation gives one of the more recent songs, ‘Warm Wind Blows Through the Grass’, an undiscovered and slightly unnerving magic imbued with a sense of guarded mystery and danger. Unfortunately, although the title track of the recent album ‘Machineries of Joy’ gains a certain gravitas it happens at the expense of its euphoric, feather-light joyfulness. It feels weighed down and unable to fly. But alongside ‘Heavenly Waters’ as the perfect intro, the colossal instrumental ‘Great Skua’ is the perfect finale, lifting the music up into the majesty of celestial spheres. Erupting into a million sonic stars, this is a musical equivalent of a Big Bang. Emotional intensity turned up to 11.

In addition to the studio album and a DVD of the Barbican show, the box set contains a live recording with multi award-winning Redbridge Brass Band and a special collection of supplementary tracks featuring live recordings from The Barbican and All Saints Church in Hove, as well as orchestral brass-only and studio versions. With the inclusion of lesser known and more enigmatic tracks, like True Adventures and Bear, supplementary material becomes essential listening for any Sea Power enthusiast. Notably, a live interpretation of Wooden Horse acquires a certain marching confidence, galloping towards its firework finale, with brass conductor and arranger Peter Wraight almost tangibly breathing life into this unusual sound beast.

Both the studio album and its box set live incarnations include an appearance from the band’s long-standing poetic associate Jock Scott. ‘Someone’s Yarning’ is a beautifully fragile ode to unrequited love, a wistful composition that fits elegantly into the fabric of BSP’s own material. Watching Jock Scott perform at the Barbican is a poignant moment. Despite his terminal illness this is a man who – following the example of another great poet, Dylan Thomas – is not going “gentle into that dark night”. Scott Wilkinson seems momentarily overwhelmed, muttering, “He’s better than us.” Although Scott’s assertion is debatable, it’s clear that what unites Jock and British Sea Power is their Romantic spirit of defiance. With its imperfections, Sea of Brass is an incredible artistic undertaking. Where lesser bands could have been accused of gimmicky marketing, BSP manage the impossible simply because there is nothing contrived or gimmicky about them. More than a dozen years into their own wayward history they remain the standard-bearer of experimental creative forces that leap far beyond the horizons of safe choices and familiar sounds. They may occasionally make mistakes but they never fails to cover new ground.

For more information about British Sea Power and to buy Sea of Brass visit https://www.britishseapower.co.uk. They can also be located on Facebook and Twitter.