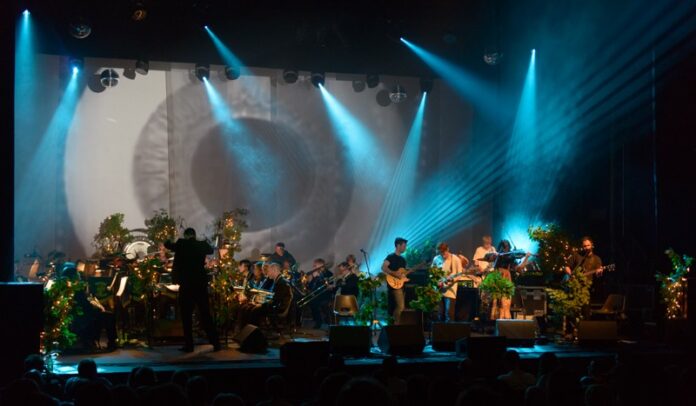 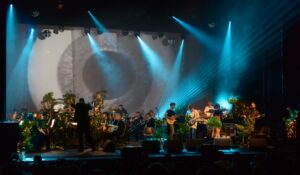 British Sea Power premiere a brand new project, as they are joined by a full brass band. The resultant force of the two is completely mind blowing and Louder Than War’s Lee Hammond is left astounded this spectacle.

It’s an early start so with a stage time of 7:30 we arrive promptly. Filled with anticipation on this hot summer evening, the sun blazing through the greenhouse-like windows of the Gala, we’re relieved to take our seats. With no support band it’s understandable to see a few stragglers taking their seats during the early part of this evening’s set.

The stage is split with the brass band on one side and the almighty British Sea Power on the other. Whilst there’s an air of trepidation around the opening couple of songs, they sound beautiful – Wooden Horse in particular is amazing and the set seems to hit its stride when they break into Atom, the texture created by the brass band is unrivaled. 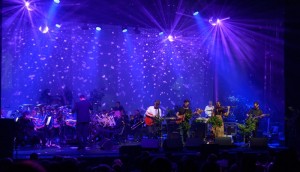 It’s as if the first few tracks are bracing the audience for an aural assault of epic proportions as Atom rings out throughout the venue, the atmosphere electric, the energy from the stage resonating from every surface in the room. The set picks up to a relentless pace with Once More Now sounding more beautiful than it’s ever done before.

So many bands have introduced string sections or small orchestras but it’s almost unheard of to use a brass band but musical arranger Peter Wraight has picked the most perfect tracks, turning this show into a retrospective of the last ten years of British Sea Power.

The Smallest Church In Sussex sounds unbelievably wonderful this evening,  so gentle and delicate, yet the texture added by the brass allows it to shine that bit more. By contrast, Machineries Of Joy shows the opposite end of this evening’s spectrum, it’s louder and wholly bigger than ever before.

Closing out the main set with another rousing track from the classic Do You Like Rock Music?, Lights Out For Darker Skies takes on another bigger life this evening. Had the band finished here this evening would have been marked down in British Sea Power history as an unparalleled triumph.

What’s even better though is that this isn’t the end following rapturous applause, chants and stamping of feet. The band return to play Waving Flags before welcoming the brass band back, to complete the set with the most amazing renditions of The Great Skua and When A Warm Wind Blows Through The Grass.

Whilst I hinted at it before, this evening was nothing far short of the most amazing British Sea Power show ever. Having long been a fan, this took a number of their classic tracks to a completely new level. We leave the theatre filled with unrivalled adoration for the band. If you have the opportunity to see Sea Of Brass I wholly encourage and endorse it as it is truly very special.