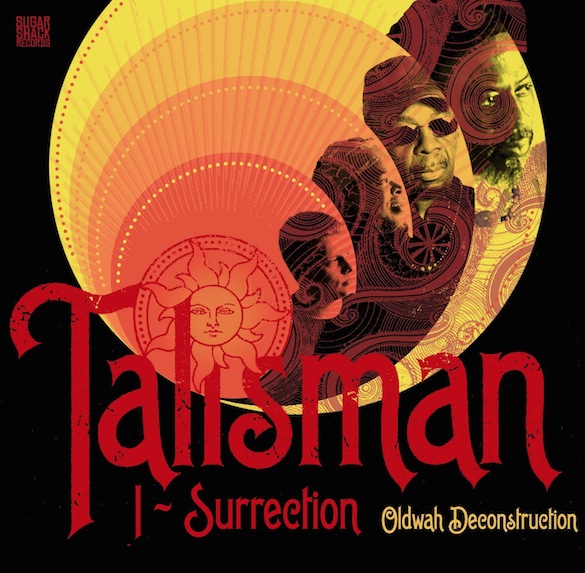 Last year we ran a review of the new album by Bristol roots reggae pioneers Talisman. We gave it a very impressive and well earnt 8.5 / 10, which, for a band who’ve only put out 3 albums in 30 years, isn’t a bad result! Now, in true reggae fashion they’ve announced that a dub version of said album is also going to be made, and we’re thrilled to be able share with you not only news about it but also a couple of tracks off it.

This album, brought to you again by the fine people at Sugar Shack Records and Bristol Archive Records, should be a must have for all fans of roots and dub reggae. But before you get down to checking out the tracks themselves here’s a bit of info about the release:

“When Talisman finished recording their latest album “I-Surrection”, as an addition to the David Hill produced finished release, we decided to give the unmixed master recordings to Dave ‘Oldwah’ Sandford and see what his take would be. Oldwah has previously worked with us, mixing the Vibes album “Reminisce” and was also the man given the job of mixing the unfinished tracks on the soon to be released Capital Letters archive album “Reality” (our review). With 40 years experience as a performing musician and an even longer standing love of reggae, he brings his own unique perspective to the task.”

Having talked to the band and hitting it off with fellow bassie Dennison Joseph, Oldwah was keen to produce something that bore his stamp but also pleased the band members. He describes his take on the music as “a piece of vinyl from 1978 taken out of a dusty sleeve”, not slick and clean but having that authentic vibe.

Influenced by the classic dub sounds of albums like “African Dub Chapter 3” and “King Tubby Meets the Rockers Uptown”, Oldwah’s dubs take you on a journey and as a musician he focuses in on instruments sometimes blending them together to great effect. This is brand new music and yet it absolutely sounds like it was recorded and mixed in downtown Kingston circa 1978.

As is the case with many a release associated with Bristol archive recordings this album is an anachronism. A release that smacks of a classic seventies dub release, but that was made less than a year ago. It demonstrates what all the best dub releases do – a producer who understands, respects and appreciates the original tracks. If you liked David Hill’s original album you’ll also be guaranteed to be drawn into this one, one that has a personality all of its own.

As a bonus, for this release you’ll find some fresh tracks from the band included; some extra tracks from the “I-Surrection” sessions which were also given the Oldwah treatment meaning you get ten different songs plus two additional mixes, a round dozen dub shots for  Talisman fans old and new.

Talisman’s “I-Surrection (Oldwah Deconstruction)” will be released on CD and Digital Download by Sugar Shack Records on 14th July 2014. To pre-order a copy of the album head over to the Sugar Shack record shop and scroll down. It can also be found on Bandcamp.

Now check out Praise Jah Dub and Things Ah Get Tough Dub below: