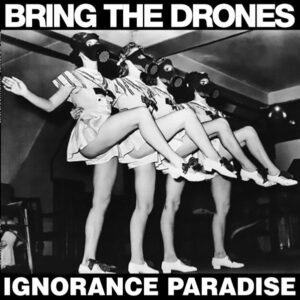 An international collective pull together a diverse range of songs rotating around a fine purveyor of “D-beat” Scandinavian punk perched on the drum stool.

Mangel! D-beat! Scando! Kang! Got your attention yet? Or am I speaking gibberish? To the cognoscenti (in lay terms, “people who know their shit”) these code words give a fair idea of what to expect. For the rest of you, the story starts in Stoke-on-Trent with a band called Discharge – who blew my ears off when I first heard them, and made the preceding purveyors of punk sound like a bunch of old grannies.  Anyway, Discharge had a fairly individual drum sound, allegedly on account of not being able to play “properly”. You could describe it as being like the Buzzcocks’ “You tear me up” on speed and bring played by an Orc. Discharge, and that drumbeat, inspired literally thousands of bands, hence the term “D-beat”. D for Discharge, geddit? And of all the bands to emulate the sound, those from Sweden nailed it the best. Scandinavia shortened to Scando. Mangel and Kang are terms that have been used by Swedish punks to describe music of this genre in their homeland. Among those who mastered this style best was Anti-Cimex, hence their frequent appearance on crusty punk jackets – appearing on a millionaire celeb near you soon.

Members of Anti-Cimex, Driller Killer and Doom are involved in this record but we can add Against Me!, International Noise Conspiracy, and the Domestics into the mix bringing a range of styles as input into the Bring The Drones cement mixer.  Drummer Charlie Claesson (Anti-Cimex, Driller Killer, Wolfhour) provides the power to rotate the mixer while guitarist Ted Fransson (Gamla Pengar) shovels in the mix.  And out pours a glorious noise. The rest of the band fluctuate so Bring The Drones can truly be called a collective. And they live all over the place.  For that reason it has taken them over 3 years to complete this record, the next logical step after their previous 12″ and 7″ EPs.

With Charlie’s well honed drumming skills you might be expecting “more of the same”, and to be fair 80% of the record is what you would expect – fast riffs and pounding drums at breakneck speed – but there is more to this than D-beat. Straight up punk, hardcore, stuff that harks back to the 80s and a nod to the less distorted sound of early 70s punk progenitors all creep in. They even manage to squeeze in some keyboards on “Don’t Tear Your Heart Out” that live somewhere between late 70s new wave and Hawkwind.  It’s one of the moments where the drums slow down to more of a stomp, along with “Ignorance Paradise”, while another (comparitively) slower tune “Ignore the Bodies” veers into metal.  “Capitulate Now” starts off as your bog standard thrash but then we get a few proper rockin’ guitar licks thrown at us.

Fair enough, the vocals are all of a “shouty shouty” nature (good!) and very British sounding, the tempo is all fast (double good!) and the D-beat dominates, but there is genuine variety. This combination of styles may make Bring The Drones a bit more accessible to your non-crusty, clean clothed, hardcore enthusiast and will appeal beyond the ranks of the DOOMed, recognisable by their shiny black trousers and cloud of flies.  Fans of Violent Arrest or Ripcord take note, songs like “Stressed to the Bones” will be right up your alley.  Don’t pre-judge.  Give it a listen.  I also have to mention a lovely twang from the guitar that I probably last heard put to similar effect on Totalitar’s “Vi Ar Eliten” LP.

Images on the cover of a family at dinner and a troupe of dancing girls – all bedecked in gas masks – follows in the tradition of Winston Smith (Dead Kennedys etc) and Gee Vaucher (Crass). The pictures look genuine rather than montage, but it is the choice of THOSE pictures which conveys a sentiment. Something about the layout makes me think of a Lard LP. That’s not meant as a criticism – far from it. Let’s face it, pretty much everything has been done already. No-one has the privilege of being truly original any more.  But if you ain’t gonna be original at least be interesting – as these fellas have.

“A Cavalcade of Bastards” leaps out as best song title (and is a great song to boot, clocking in an epic 2.54, with an almost “neo-punk” sound to it) but there are plenty of bleak/dark humoured phrases to choose from on the 18 tracks – go take a peek. Bring The Drones do not live in a happy world, but then who does? Faced with potential nuclear Armageddon, constant war and Mexican cartels they also understandably descend into self loathing and a generally anti-social, somewhat violent, pissed off rejection of society and it’s crushing conformity. But what were you expecting? Happy clappy lala radio friendly boy band pop “punk”?  There is far too much of that already.

So, having dropped enough names to potentially pique your interest, in conclusion I’d say that the “members of” tag alone may well help shift sales of the album more than any of my shitty opinions but this project has certainly produced something greater than the sum of its parts. I guess sometimes 2+2 does equal 5.

~
Available from Kibou records. Sneaky listens on the bandcamp page.

You can check out Bring The Drones on Facebook and soundcloud.

Words by Nathan Brown. More punk ramblings from Nathan can be found over at his Louder Than War Author Archive.