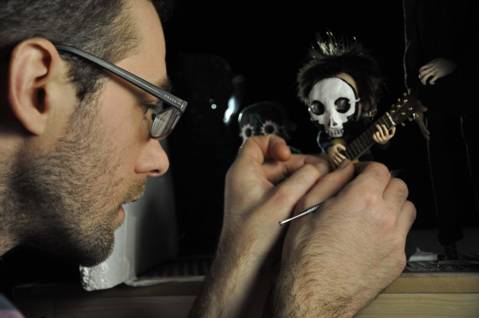 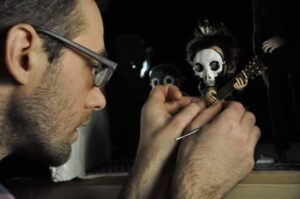 The first single from the new James album La Petite Mort, out 2 June, was released the other day alongside a brilliant video by BAFTA award winning animator Ainslie Henderson (see pic right). Check it out below along with details about how the video came about.

Frankly, even if you aren’t a fan of James you should check out the video itself which is simply stunning and is definitley not your average music video. It took months to complete using stop motion techniques to photograph an unravelling of a ball of string that’s conveying the characters throughout . It’s incredibly moving and there’s a good chance it’ll move you to tears.

It’s not long till the album drops now, to pre-order it go here: wearejames.com. If you do so now you’ll receive an instant download of two tracks off it so don’t dilly dally!

The story behind the making of the video, including quotes from both Ainslie ant Tim Booth, can be found below the YouTube embed:

“My connection with James is a long and evolving one. The first time I heard their music was sitting at a friend’s house, aged 18, stoned and confused. ‘Sometimes’ was playing, I remember feeling something that until then I didn’t know pop music could make you feel. I thought crying was only for when you feel loss or sadness. Pop music, but woven with something sincere and yearning, passionate and beautiful. It was 1997, Britpop was happening and I’d just started my first band, I was falling in love with music and trying to figure out who I was and what I wanted my life to be. I was emboldened by the Gallagher swagger, excited and inspired by Blur and Pulp, but James’s music spoke to me like no other band of that era. James didn’t seem to really belong to that era, they orbited it, danced around it, but they were their own branch, growing off in their own direction. It’s telling for me that as Britpop died away and my love for those bands faded into nostalgia, I remain as curious for the next James record as I ever was.”

“It is 2003, and I find myself with Saul and Mark, the guitarist and keyboards player from the band. We are recording an album in a makeshift studio in the dusty loft of a French Châteaux. A turn on a music reality show named Fame Academy and subsequent recording contract with the same label the band were signed to lead to an introduction. Fate delivered to me a long, wonderful summer with them, recording pop songs, eating cheese, drinking red wine and flirting with the French girls of the local village. Je suis un poisson, je n’ai pas d’eau..”

“It is 2014, I’m on the phone to Tim and he is describing how they came to write this song, and what the words mean to him. The story he tells me is deeply moving; one thing that stayed with me is his describing death as a birth. Some days later this conversation echoes around my mind while I’m listening to ‘moving on’ I walk past a typical Scottish woollen knitwear shop. My eyes flit over a ball of wool in the window while the word ‘unwinding’ is sung. Pretty quickly I’m leaving a garbled, over excited message on Tim’s phone about the music video I have in my head.”

“It’s now the day after I finished the film and I’m exhausted, bleary eyed and looking forward to joining in with the spring that I hear is happening outside. I’m so grateful Michael Hughes, the other animator who I gave all the difficult shots to. Thank you for your skill and patience in tolerating my terrible perfectionism. Most importantly, I feel delighted with what we’ve achieved, I think we’ve made something kind of special. I feel so honoured to have been able to contribute something, in my own small way to this magical thing that is James.”

Ainslie Henderson is a writer / director / animator / who in, 2012 was awarded a BAFTA for his co-writing of ‘The making of Longbird’ with director Will Anderson. He and Will are the creative team behind ‘white Robot’. Ainslie’s last film “I Am Tom Moody” Was nominated for the 2014 BAFTA and has currently won over 30 international festival awards, including; Best British short at Encounters, Disney, best student film at Ottawa and the special jury prize at Annecy. Ainslie has a particular love for stop frame animation and is currently freelancing in Edinburgh.

“I’ve know Ainslie for years after channel hopping took me to an episode of ‘Fame Academy “. I watched in shock as he worked with Mark and Saul in the “Fame Academy” mansion. I hate those shows but this boy had something. Luckily for him, what he had was untameable, he wilfully didn’t fit the mould, was too original and spontaneous; he didn’t win.”

“Over the years we met and then I became aware of his animation work through Saul, who suggested we work with him. Ainslie’s animation is wonderful, heartfelt, truthful, innocent, and reveals a true storyteller. As a band we were determined to work with him even if it meant dipping into our own pockets. Animation takes weeks and is painstaking work, for the animator, compared to that of most videos.”

“I remember standing in a back garden in Highbury, mobile burning my ear, as I told him in detail of my Mother’s death and that of my friend Gabrielle – the twin inspirations for “Moving On”.

My Mother’s death was clearly a birth of some kind and that description caught Ainslie’s imagination.

Two days later, with perfect timing, his video script came through on my email, as I was having a meeting with our manager Peter, trying to persuade him that we should pay the extra needed to work with Ainslie.

I tried reading it to Peter but couldn’t complete it due to tears. Peter read it and welled up.

That Ainslie found such a perfect medium to fit our song blows us away. He delivered on the promise of his script and then some. This is the first video we have made that we consider to be a work of art. God bless your perfectionism Ainslie and thank you and Michael for working with such care, artistry and heart”.