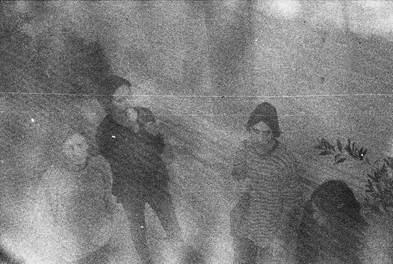 Brighton’s most melancholic inject some melody in to their most recent single. Louder Than War’s Dave Beech catches up with them once again.

It goes without saying that in this line of work there’s certain bands who you will cross paths with time and time again. Sometimes this isn’t a good thing, but more often than not, being able to watch a band’s progression, and in some cases help that progression, is a major perk. One band who I’ve come across on more than a handful of occasions, are Brighton’s Morning Smoke.

Having reviewed the bands first single as one of my own first write-ups, it’s impressive to see just how far the band have come in just three short years. Having recently signed to Cannibal Hymns, and having massively improved their approach and attitude towards household chores, we thought it was high time we caught up with the band again.

Louder Than War: Hey guys, it’s been almost exactly a year since we last spoke, what’s happened in that time?

Morning Smoke: Hey, yeah its been a while! A lot has happened, myself (Milo) and Chris (bass) have finished our degrees and we now have to try and come to terms with being real people! But as a band in the last year I think we’ve got closer to finding our sound. It’s definitely that happiest I’ve been with the band.

You recently signed to Cannibal Hymns, how has that been? What sort of doors have opened now you’ve label backing?

Yeah it’s been amazing, a really great experience. We all knew the guys behind the label prior to releasing some tunes with them, however it’s been a pleasure to work with them and hopefully the beginning of a great working relationship / the start of world domination.

You’ve just released your third single, Soft Decay. What’s the story behind it?

When your ice cream starts melting, and you get really sad.

It feels more melodic than previous singles, at least as far as you go, was this an intentional direction?

I’m glad you think that! I wouldn’t say at the time we intentionally thought lets make it more melodic. Naturally we’ve gravitated towards a more melodic sound which hopefully will be even more evident on the next release.

You worked with Rory Atwell, a name in his own right these days, and there’s elements of his band Warm Brains that comes through on the single. How was it working with him and did he bring anything to the table you might otherwise not have thought of?

We worked with Rory on the single we did before, so we already knew we got on well so doing another single with him seemed natural. His studio is also on a boat which is pretty wonderful.

Soft Decay and its B-side, How Does It Feel were recorded on a limited run of cassettes, something a few bands are doing at the moment. How important do you think these kind of releases are for bands, when everything is available on the internet?

I think it’s really important to have something physical that people can hold on to and possess. One of the problems with streaming and downloads I think is that some of uniqueness and specialness that a physical product holds can be lost. The great thing about tapes as well is they are super cheap to manufacture and to buy.

Incidentally, when mine was delivered, my mum saw the band name on the envelope and thought someone was posting me weed. Does this kind of confusion happen often? Or is it a sign I should either move out or stop smoking weed?

Hahahahaha that’s amazing! It has happened before and it will probably continue to happen. It’s funny because although we find it funny when people assume it’s about smoking weed, it genuinely isn’t about that. Although it is hilarious when you Google search Morning Smoke because most of the images are just people getting high…

In the past you’ve said you were all keen to make music a full-time career, how realistic is it for you being able to do that now?

I still believe that is going to happen, whether it takes a year or five years I don’t care. The thought of working a 9 to 5 job I hate for the rest of my life…kills my soul.

Last time we spoke, you mentioned that Isaac never bothered washing up. Has his domesticity improved any recently?

Yeah Isaac’s really stepped up his washing up game. The last interviews comment about his domesticity really cut him emotionally so in the last year he’s really worked hard on that!

Finally, with 2015 now over what can we expect from the band going in to the new year?