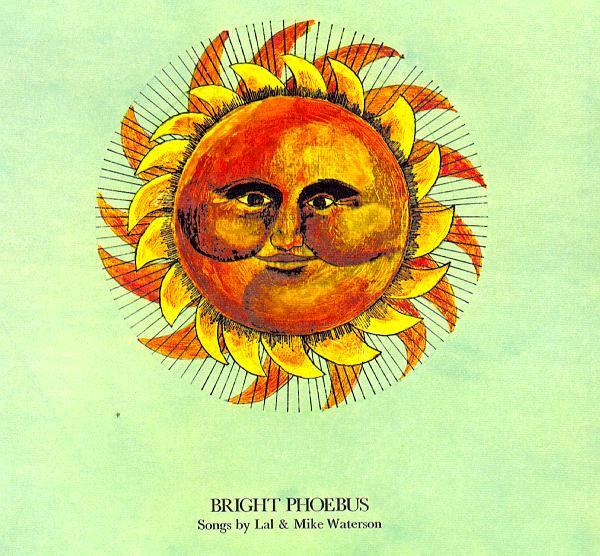 The much heralded remastered release  of Bright Phoebus, the 1972 folk-noir album that has since attained legendary status. Prepare to pay due reverence to a crucial part of English musical heritage.

A record that should be considered no less than a historical document in the chronicle of English music with quite some journey resulting in  what we hold as the 2017 remaster/re-issue. The story behind what has now emerged as a genuine landmark set for a more appreciative contemporary audience is similarly stuff of legend.

The dark tones of The Waterson’s 1965 Frost & Fire album had already thrown  a nonconformist cat amongst the folk pigeons so to for Bill Leader, who saw the potential in the Watersons, to initiate the recording of their Bright Phoebus  songs on antiquarian two track equipment in the basement of Cecil Sharp House that resulted in a sound which belied its age,  was a risky venture. Especially considering it would see The Watersons being accompanied by an electric band for the first time (surely a Judas moment if ever one existed). The Steeleyes and Fairporters of the time all combined in a coming together that saw Lal Waterson recognised/described as “very Yorkshire” by Steeleye’s Maddy Prior and  by Richard Thompson as “a singing Bronte.” It also kick started  a key period for Steeleye’s Martin Carthy, redefining  his future as he became  mesmerised by playing for the first time with Thompson and his engagement  with Norma Waterson.

A time of enlightenment indeed. Dylan and The Beatles may have opened the gates but the insurgents were now pouring through, although at the time, the album seemed destined to a less than magnanimous fate. Nonchalantly received, copies pressed off centre and then disappearing from print rapidly all contributed to the mystique. It also saw the  folk police up in arms as the majesty of the close knit Waterson voices was violated  by musical accompaniment from other folk experimenters and boundary pushers. Maybe best it was swept discreetly under the early seventies heavily patterned nylon carpet.

However, fuelled by the  unconventional upbringing of the Watersons, the songs of a macabre mystical and mythical  Britain, stillbirth, human sacrifice, a grimy Sgt Pepper,  were a perfect   antidote to the conservative attitudes of the a closed off folk circle.  With the off kilter opening on Rubber Band,  you can imagine the grimaces and hands over the ears, alongside the  prophetic line “I’d like to see how far the band can go” and a plentiful helping of Dylan’s Rainy Day Women quirkiness and strange noises. Similarly, Magical Man wouldn’t be out of place in the Townsend songbook, maybe taking a trip on the magic bus as the Waterson template was gloriously re-imagined.

“Strange thoughts are running through my head” goes Fine Horseman, and while not necessarily induced by chemical stimulation the bizarre and outlandish drift alongside  dreamy pastoral soundtracks. The splendidly named  Winifer Odd also appears  straight out of Pepperland yet a step or two further along the road to austerity. Child Among The Weeds, featuring the guitars of  Richard Thompson and Martin Carthy,  is completely hypnotic – their  “sing him a lullaby” barely disguising the shared experience of Lal Waterson’s  stillbirth experience in an  unreservedly unnerving moment. And from the sublime to the ridiculously mundane – tales of  falling over drunk on Red Wine Promises and Mike’s painting and decorating job that  served as inspiration for the title track mix with the mythology.

The album is accompanied for completists by a  whole set of 1971 demos of which Song For Thirza, celebrating the strange workhouse character rescued by grandmother Eliza, stands proudly untarnished. The demo version included finally after being omitting from the original album as  too raw and emotional  for Lal to sing.

The  criticism at the time that Bright Phoebus wasn’t  folky enough and guilty of not conforming to the expected,  now looks embarrassingly short-sighted and narrow minded. The time is right to appreciate the dawn of a new Bright Phoebus,  heralding  a beacon-like passage into the annals of folk history.

You can listen to Bright Phoebus  here:

The BBC Music  page for The Watersons is here