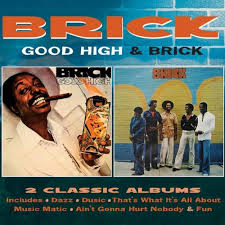 First two LPs by Atlanta Jazz Funk Titans Brick. Ian Canty dreams that he’s back at a 70s Caister Weekender grooving to the sound of the Funk underground

The 5 piece band Brick were formed in Atlanta in 1972 by two separate outfits joining force. One of these bands strictly played Jazz, the other Disco and when putting these two different slants together they arrived at their own unique style, which they termed it Dazz (i.e. Disco and Jazz, which was not far away really from classic Jazz Funk). They didn’t make much of an impact outside of the US, but in their hometown they were a huge live pull, easily attracting 1000s of fans to a gig. Releasing seven albums between the years 1976-88, although Brick didn’t enjoy the high profile internationally of contemporaries like Slave and the Brothers Johnson they still managed to score some big hits on the Billboard and R n B charts, beginning with their first record, the “Music Matic” single.

This twofer brings together their first two LPs though, the ones that made the most impact on the US charts. The sleeve of “Good High” is classic: Flautist/one man brass section Jimmy Brown poses dressed in white, with a “shit-eating” grin on his mush, smoking a large cigar and brandishing a huge chocolate bar with the Brick name splashed across the wrapper. It’s all done with a sly humour and that comes across on the record as well. “Dazz”, the big hit single (number 3 in the national charts) is an insistent groove, full of coiled energy. For the most part “Good High” is pretty laid-back Jazz Funk, somewhat akin to mid-period Earth Wind and Fire. There’s plenty that is offbeat here – “Sister Twister” is led by a mad sounding trumpet and “Can’t Wait” an oddly structured, Jeykyll and Hyde effort, smooth funk with synths/string juxtaposed with more tense sections featuring declamatory voices. As if to soothe the listener, they finish the set with a smooth soul ballad in “That’s What It’s All About”. On the whole it’s a decent record but does tend to coast a little in places.

For me the self-titled follow-up is the better of the two albums presented here, the sound more confident which allows the band to experiment more. Their Jazz “chops” meant that they had the musical muscle to confidently explore other avenues that the more typically Disco outfits didn’t even consider. The quipping of “Dazz” continues on “Dusic” (not a Serbian midfielder courted by Chelsea in the transfer window, but made by combining the words Disco and Music) which tore up the charts like it’s predecessor, a chugging non-stop dance monster which to me sounds a little like Blur if they had a go at being a silver voiced Funk band! “Happy” typifies the eccentric side of the band with it’s quirky groove and “We Don’t Wanna Sit Down, We Wanna Get Down” is their mission statement. “Fun” even drops a bit of light Reggae skanking into the mix, with some nice female vocals too. Finally they again proved they were dab hands with a creamy soul ballad in the charming “Good Morning Sunshine”. Bit of a forgotten classic 70s Funk LP for me.

Both discs are rounded off with the single versions of “Dazz” and “That’s What It’s All About” on “Good Thing” and “Ain’t Going To Hurt Nobody” and “Dusic” on “Brick”. Though the band would carry on for a number of years these two records were their highpoint and it’s no wonder that their early material has provided many a break-beat over the years (Ice Cube and Soul II Soul to start with have dabbled with the Brick back catalogue), such was their natural invention. Very much a “Good Thing” indeed.