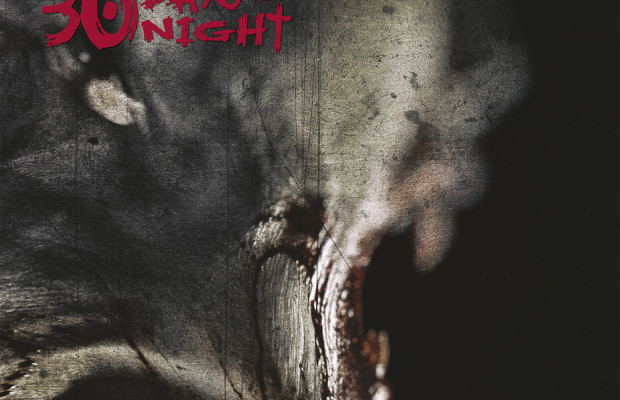 Brian Reitzell is one of the most acclaimed composers working today. Now, for Record Store Day, Invada Records are releasing his soundtrack to the 2007 vampire film 30 Days Of Night. Simon Tucker reviews.

Brian Reitzell has a way of creating an audio experience that is utterly immersive and always interesting. His score’s manage to reach beyond the normal soundtrack aficionados due to their eclectic reference points and pure creativity.

With 30 Days Of Night, that reputation will be even more firmly established as it is, quite frankly, one of the most inspiring and twisted journey this writer has ever been on.

As dictated by the film it is scoring, 30 Days Of Night, is an utterly terrifying delight that channels the spirit of Coil and Nurse With Wound into its all to brief 48 minutes running time.

Prelude/Last Day Of Sun submerges you into proceedings as mournful strings play like a Gaelic hymn before the sun goes down and we are thrown into darkness. Girl Bait arrives on the scene swiftly cranking up the tension and insidious vibes but it is the next cue Muffin Monster that REALLY gets the pulse racing. Muffin Monster slams in on an ancient drum beat pounding your mind and heart. A fine example of a great soundtrack cue that works without seeing the movie (like myself) Muffin Monster lets the listener paint its own, agitated and eerie images. Not for the faint of heart but a thoroughly exciting experience.

Soon There Will Be 5 slows the pace back down but does not for one second give you any room to breathe as it snakes and bites, with flourishes of white (light) noise and feeds straight into Vampires On The Horizon which swarms around you pecking at your ears like walking through a swarm of flies.

They Didn’t Take Me and Barrow Burns reintroduce the devil beat as it marches through your psyche with precise impact. The instrumentation used here helps snap the album back into life and acts as a wakeup call to you not allowing you to slip into dream.
Ditchwitched takes us into the middle of the album and is a highlight as at first it seems we are once again being drawn into the more nightmare ambiance of what has gone before but just as you get settled what seems to be multiple drummers snare roll us into a militaristic march that peaks at an almost unbearable level before we are momentarily left to breathe on a bed on pins and synth distortion.
We have now reached the middle section of the album and this is the exact point where we are made to feel that there is nowhere left for us to escape to. There’s not a single sign of a possible release as Vampired Johnny, Guss Loses His Head, and You Wanna Play With Me Now all smother you in a deep mix of electronics and string instruments. An extremely claustrophobic section, these cues are truly gut churning and very very very exciting.

30 Days Of Night then starts to build towards its climax as The Bloody Fruits Of Barrow spews the drums back into the mix and Eben Shoots Up actually throws a wink to the post-punk genre and specifically PiL during their Metal Box pomp (play this and Careering and you’ll hear the shared DNA).

Then we start our final descent as The One Who Fights fuzz drums us into a world where Chaos AD and The Piper At The Gates Of Dawn had an illicit night of passion and Daybreak then gives us some semblance of hope as it returns us to the traditional sound of strings and drone planting us back onto Earth and giving us weird sense of historical reference.

If you think we’re safe now you would be sorely mistaken as Reitzell then adds a sense of doubt to the calm with Overture (backwards masking, heavy pulse) and Underture which, whilst containing glimmers of positivity and hope of a happy ending, still holds within it extreme moments of claustrophobia and angst.

30 Days Of Night is sensational. It’s an album that is not built for the faint of heart but rewards handsomely those who take the ride. If you love the more esoteric of musical genres and have a perverse fondness for things that disturb then this is the album for you.
Get to your local shop on RSD and beg, fight, and scream for a copy.

All words by Simon Tucker, more writing by Simon on Louder Than War can be found at his find his author’s archive.