Home Music Brian May reissues solo album Another World in spectacular style at the...

A special event at the Royal Observatory in Greenwich on 22nd April marked the release of Brian May’s second album Another World, from 1998, in a multi-format deluxe edition.  It’s the second album in his Gold Series, featuring the remastered original album together with remixes, rarities and live tracks in 2CD and box set formats.

At the age of 12, Brian May recorded an impassioned commentary about the stars and constellations he already had so much knowledge about, dreaming that one day his commentary would be the accompaniment to a planetarium show.  In a quite extraordinary, and yet entirely logical, sequence of events this is exactly what has happened tonight, where an exclusive audience find themselves listening to Brian’s 12 year old self whilst lying back staring up at stars and music videos connected with the relaunch of his solo album Another World, transported deeply into a world where astronomy and rock music are inextricably connected.

Tonight’s a visibly emotional night for Brian, who despite his stellar rock legend status seems a bit overwhelmed when he takes a seat for the first tranche of Q&A with Simon Lupton.  We’re about to watch the first new video, Another World, which Brian explains has a lot of meanings for him; it’s a love song but it’s also about the different worlds we can inhabit. The video was filmed in Tenerife near the Slooh Teide Observatory, which suits the Spanish atmosphere of the song perfectly.  He elaborates that he has always felt close to the heavens in the Canary Islands, having first gone there as a boy. He had a zodiacal hut there and spend many days and nights taking observations.  It’s clear that the observatory there means a lot to him and he says he hopes that his ashes will be spread there when he’s gone.

There is a sister observatory in La Palma where Brian has also spent many weeks “getting closer to heaven”, and then the third important location for him is El Hierro, which is where he found the tree that features on the album cover.  For him, the tree symbolises that when you’re growing up in a hostile environment you have to bend or else you break. It’s a theme that’s woven into the album.

Brian explains that the Another World album came about in a time when he was still grieving for Freddie and for Queen but determined to carry on making music.  He had an idea to revisit all the bands that had influenced him, like Mott The Hoople, Buddy Holly, Jimmy Hendrix, to try to find himself, but got side-tracked by being asked to work on other projects, eg. a theme song for the TV series Frank Stubbs Promotes, and also for the film Sliding Doors.  The end product (Another World) wasn’t used, but that gave him a kick to make a new album.  He lost drummer Cosi Powell at that time too, who had been a friend and spiritual support along the way. A young Taylor Hawkins came and drummed on Cyborg: “He was only a boy to me… he was the ultimate Queen fan… and I said to Taylor ‘you single-handedly made us cool again Taylor.’  We owe Taylor a lot.”

The next video is On My Way Up, which Brian laughingly describes as “an uncharacteristically optimistic song from Brian May who’s a miserable bastard!”.  The look on his face at the end of the video gives away how proud he is of this song, which seems to be entirely justified as it’s just hit number one in the Singles Chart.

According to Brian: “The central character of this song is someone who is basically a loser, but has total belief and a kind of insane optimism, and he’s going somewhere, you know, ‘Man, I’m on my way’ kind of thing. So that’s what the song was. It became imbued with different things once I got going on the track, but it’s basically funny. It’s funny, and it’s optimistic and loud.”

He adds that while he was creating the song, “I had a moment of belief and joy thinking, ‘Yeah, I can actually can do this, it’s going to be fine. It’s a very joyful song, and that’s one of the forces which propelled me through the album and made me want to release it and makes me want to release it now.”

Asked to talk about the album, Brian tells us with genuine humility that he has had so many fortunate things happen in his life, and in a way they are all connected; he was only able to get back into astronomy because “the thing with Queen went quite well..”. It also led to more stereoscopy and he now makes stereoscopic pictures of stars and planets – everything is strangely interconnected. He says that as a kid he was told he could only do one thing – if he wanted to be a scientist he should forget about superfluous things like playing the guitar.  But he’s hopeful that things have changed and kids these days are encouraged to develop many facets of their personalities.

This album is special for many reasons, including that Jeff Beck plays on it because he was a hero of Brian’s – The Guv’nor is him.  “He’s like Mozart to us”.

Simon asks him if Made In Heaven with the rest of Queen helped.  Brian explains “Me and Rog both completely overreacted to Freddie’s death….To finally face it was a wonderful and a terrible thing to do”, and that listening to Freddie’s voice all day was so tough to do when he wasn’t physically there anymore. But after that Brian felt ready for anything.

Asked whether any of these songs could have been given the Queen treatment, Brian responds that they are mostly too personal for Queen.  Except for Too Much Love Will Kill You, which he comments has a lot of pain distilled in it – Freddie sang it and possibly knew things at that time which Brian didn’t, giving the song a different dimension.

The album has a cover of Maybe Baby – the young Brian had listened regularly to Radio Luxembourg in bed at night, and was completely knocked out by Buddy Holly – even at that time he thought “That’s what I want to do!”.  The Maybe Baby video features images of Bri-Art artworks, which are images of Brian that have been created by fans.

For the Sliding Doors theme Another World, Brian ponders what could have been the other 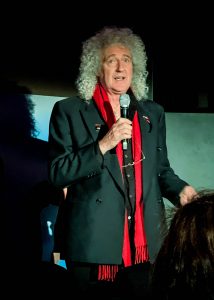 Brian May world.  He could have been an astronomer and closed the door on music – but he feels he wasn’t a great astronomer, so he quit and another door immediately opened for him. “Music has opened every door for me….being successful in the sphere that I chose enabled me to work with the best people… it’s a real privilege. I’m walking in another world and I am grateful.”

Asked what will be the next instalment in the Gold Series, Brian says the Star Fleet Project, which is greeted by cheers around the room.  He comments that he has lost Ed Van Halen who was central to that project, and how much he had loved being able to just make music with him.  It’s not going to be a big album, just three songs at the moment, but he can’t wait to hear it given a new glitter.  He’ll do it for Ed.

Could a new solo project happen?  Possibly.  Brian feels drawn to orchestral music, symphonic tunes – just as Freddie was too – all the stuff they absorbed as kids.

To finish off the evening, we are treated to a premiere of a new song, Floating In Heaven.  Brian explains that he received a call from another of his heroes, Graham Gouldman, who wrote many hits for 10CC, Yard Birds, The Hollies and Herman’s Hermits. He’d written a song about the James Webb Space Telescope, which will deliver incredible information next July about the formation of the universe and will see further back in time than anything ever has by a huge factor. One of the Telescope’s jobs is to look for new exoplanets – planets like Earth circling other suns. The first one was discovered in 1995, and there are literally thousands of them now. In the video Gouldman effectively becomes the voice of the Telescope, and as we’re gazing at the stars, hundreds of circles start to appear, showing where new exoplanets have been discovered.

Tonight’s event marks the release of Another World in a multi-format, meticulously repackaged deluxe edition, the second in his Gold Series, featuring the remastered original album alongside remixes, rarities and live tracks in the 2CD and box set formats.

The 15-track rarities collection in the new edition of the album, titled Another Disc, also features Brian’s live version of On My Way Up, as performed in Paris in 1998, and a new guitar version, of which he says: “It’s nice to just pick up the guitar and sing it with a guitar, so there’s a couple of those versions on there. I particularly like the one of On My Way Up because it’s very kind of rude. It’s just raw, and I’ve done nothing to it apart from playing.”

In the Another World 2022 album liner notes, he notes how far we have all travelled since the album’s release in 1998, but also that the exploration feels very appropriate at this time. “It seems perhaps that in 2022 we ARE in Another World,” he writes, “but if it’s not quite the world we asked for, perhaps we can still reach that perfect world… in our dreams. JOIN ME !!!”

There’s no doubt that in Brian May we are gifted an incredible example of what someone can do if they stay true to their dreams. A legend of our times. 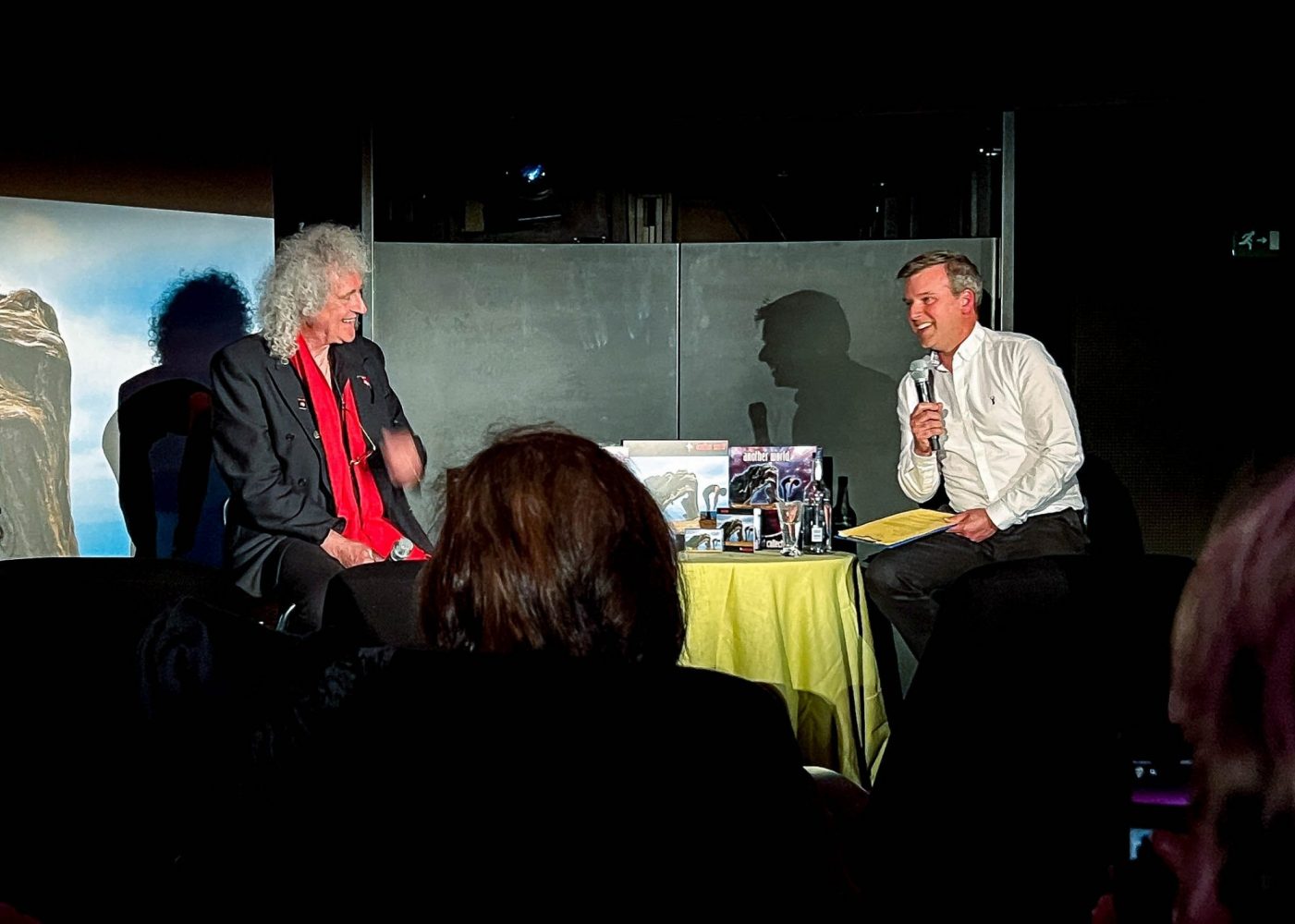