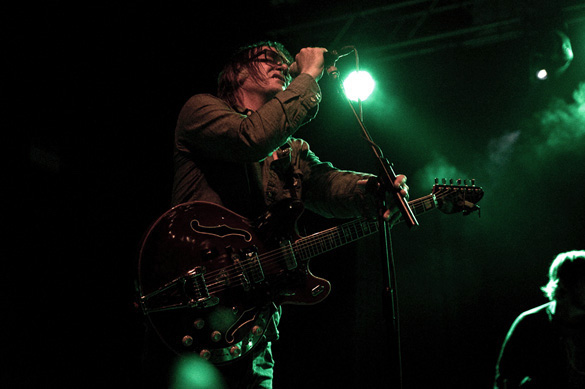 While most people in Manchester were enjoying Pixies on Thursday night, our man was enjoying a very different alternative 90s band – The Brian Jonestown Massacre.

The Brian Jonestown Massacre are a psychedelic rock band from San Francisco. I’d caught wind of them earlier this year after hearing rave reviews of their Glastonbury performance, so I was eagerly anticipating seeing them in the flesh. 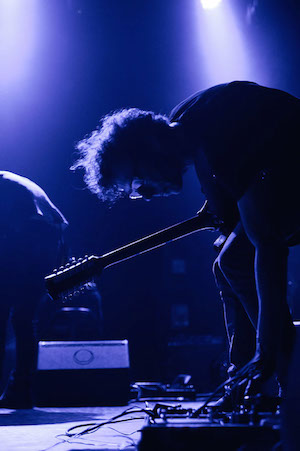 But the surprise of the night came from the support band. Birdstriking are a three piece noise punk band from Beijing who hugely impressed me with their sheer technical proficiency. The frontman was oddly charismatic too, and despite not being able to sing along to the songs he tried to teach the crowd the Chinese equivalent of ‘Good show!‘ But it was their sound that was unlike anything I’ve heard – the lead singer’s voice worked especially well during the more shouty segments of songs, with ‘Magpie‘ being the best example of this. I really hope they tour in the UK more often, I’d love to see them again and I’m happy that I’ve been exposed to some music that’s so far out of my comfort zone. Judging from the crowd’s reaction, too, I’m sure they’ve made more than a few new fans tonight.

And then all eight members of BJM took to the stage for a huge career-spanning two hour set. Now I knew a fair few songs but this was most definitely a fan’s setlist – and judging the crowd around me you could tell that there were some diehard fans. I’d never seen people mosh to such melancholic, down-tempo music before.

Lighting was minimal, with just primary colours and extremely occasional strobe lights. Talking was minimal, with hardly a word from Anton Newcombe, lead singer, who stood off to the side of the stage. Taking centre stage was Joel Gion, a percussionist playing tambourines and maracas. It was oddly hypnotising, a constant barrage of guitars and synths surrounded one man and a tambourine.

Second track, Who? was a highlight. A much catchier melody which you couldn’t help but sing along to. It was these moments that I think BJM came into their own, relishing the chance to play something a bit more uplifting and fast-paced. The audience reciprocated tenfold, with crowd surfers surrounding me chanting back ‘WHO?!’

Anenome was possibly my favourite song of the night. Feeling a little bit more in the vein of My Bloody Valentine and other shoegaze bands, the song was heavy on synth and bass, with mumbling whisper vocals that were mesmerising in all the right ways. The lighting was more effective here, much more trippy. 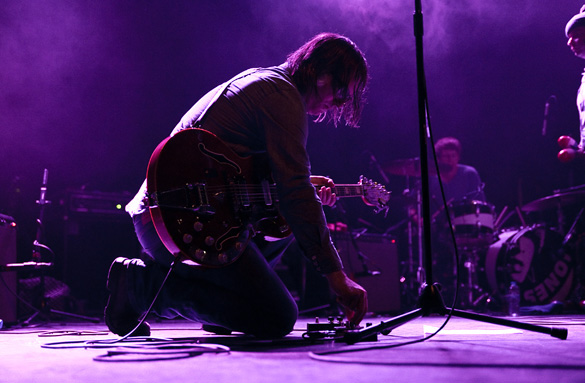 Oh Lord, on the other hand, made me feel like I’d travelled back in time, with a sound recalling 60s music at it’s finest. But it was at this point that I realised why I was having so much difficulty really getting into this band. Their setlist was inconsistent, flitting between different styles and genres in rapid succession that made the whole night become a blur of sound. The members had such a tightly knit, technically astounding sound that it was hard not to enjoy them, and I left feeling like I’d witnessed something impressive, but I have this niggling feeling that this is a band that you have to ‘get‘ before you see them.

Quite honestly, I can’t fully tell if I enjoyed the gig or not, but I can definitely say that it won’t be one that I’ll forget any time soon.

All words by James Lowther. All photos © Melanie Smith. More writing by James on Louder Than War can be found at his author’s archive, and more of Melanie’s photos at hers. Melanie also has a website (mudkissphotography.co.uk) where she displays her work.