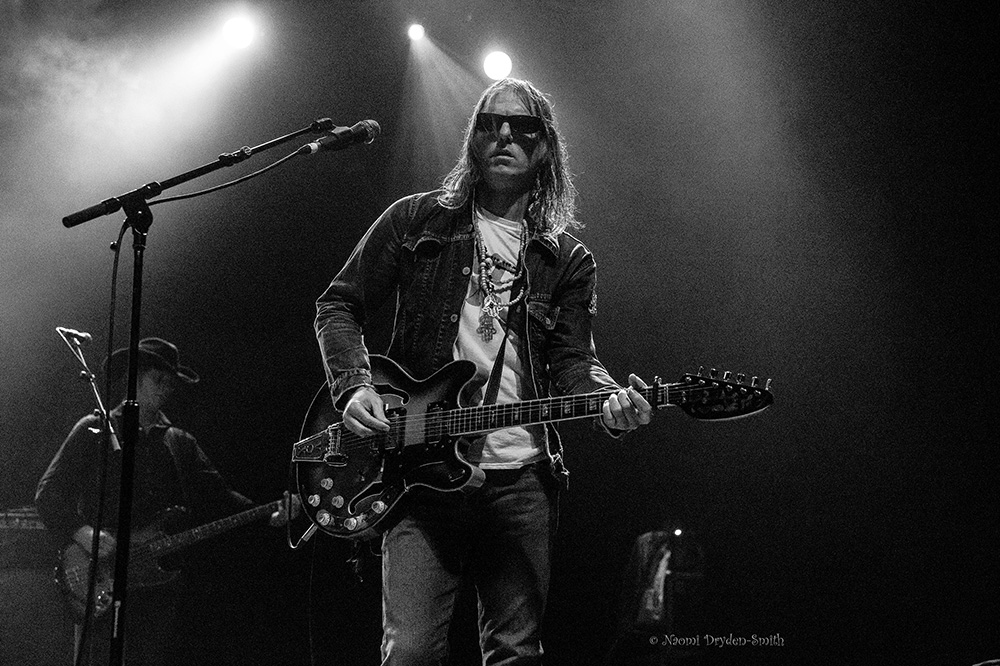 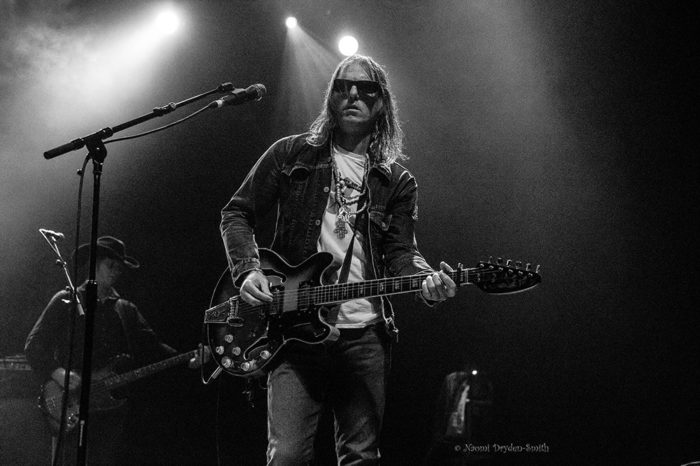 The Brian Jonestown Massacre’s recent London performance saw the band get dolled up. But it wasn’t to last. Louder Than War’s Andy Duke explains how the theft of a voodoo doll may have put Anton Newcombe’s future wellbeing at risk.

A quick glance at the O2 Forum’s stage before The Brian Jonestown Massacre (BJM) take to it tells you everything you need to know about this band. There are more amplifiers than there are band members. But this is a musical ensemble who treasure the sonic properties of how an old Fender combo sounds different to a vintage Vox AC30 and that’s an admirable trait. Whereas other touring outfits combat the prohibitively high costs of touring by pairing down their gear and using digital amp modelling equipment that you can fit in a briefcase as a sonic compromise, Anton Newcombe is endearingly insistent to keep it real. And it shows.

There’s no pomp and circumstance to BJM’s arrival onstage. The septet amble their way to their respective positions to no incidental music or announcement. Not that the full capacity crowd aren’t cheering their arrival. In fact, the theatre of the band’s preparation is arguably part of the show. Newcombe, brandishing a smartphone and hunched over one of his many amps, seems frazzled and is being assisted by one of the band’s techs. One can safely assume that something has happened to his settings between soundcheck and now. To the BJM frontman’s credit, he’s hands-on with his musical equipment. There are no diva strops tonight. Meanwhile, Joel Gion surveys his pile of percussion. When it comes to tambourine playing, this long-standing member doesn’t mess about. In the same way that harmonica players in blues bands have an instrument for every key, Gion has a tambourine of every size. Although he’s often referred to as the just the jester of the band, you can’t deny the fact that he’s a tight percussionist and a captivating presence onstage even when just tweaking his microphone stand before the set starts off in earnest. And, some five minutes in, BJM do just that and kick off the proceedings with recently-released We Never Had A Chance. It’s a delicate track with a slow build that only BJM can pull off as an opening number. By the time Newcombe launches into the guitar solo, all the faffing about with amp settings earlier makes sense. Resembling Peter Fonda circa Easy Rider, Newcombe looks well. Gone are the Victorian-style grey chops. In is a white T-Shirt emblazoned with ‘Eat Shit’ on it. More about this shirt later. 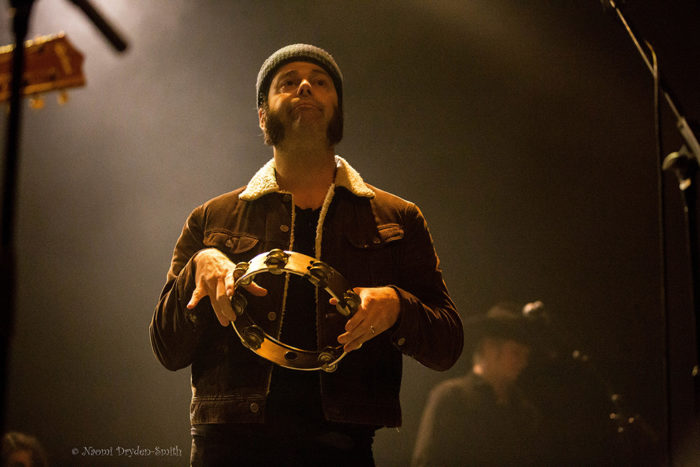 Scanning the band’s legion of highly dedicated fans, I pick up on a unified trait. By the time the receptive crowd is treated to That Girl Suicide, from 1995’s Spacegirl & Other Favorites, I notice that virtually everyone in attendance (including myself) is dancing like Cher. (We’re talking about any-era Cher here. It’s the way she sways side to side which seems to inexplicably work with any genre she’s singing in.) This is in no way to berate the group’s followers or the seemingly ageless pop icon for that matter. There’s just something in the driving medium-tempo delivery of the band at full tilt that makes people summon their inner-Cher involuntarily. Perhaps it’s not all that surprising as the psychedelic sound that’s apparent in the DNA of the band would have been witnessed at its inception by the very singer who still believes that there’s life after love. If this reference causes offence to some readers, please “snap out of it” (Moonstruck reference) and observe the moves of the audience the next time you’re at a BJM gig. You’ll find yourself doing it as well.

A quarter of the way into the band’s 18-song set, a fan hands the singer a perfect Anton Newcomb doll, so highly detailed it’s even wearing the Eat Shit t-shirt. The Californian-born singer is visibly touched by the gift and, grinning from ear to ear, takes time to read the accompanying card. The analogue of Newcombe is carefully placed on top of his amp and oversees the rest of the gig without incident. Sadly, this happy status will only be temporary. Fast forward 90 minutes and that very doll will be stolen from the backstage area post-show. In a cruel final insult, photos of this Mini-Anton (Tony) have been circulating the internet in Amelie-fashion since its kidnapping. At best, it’s a kind gesture that has been deprived of its intent through thoughtless behaviour. At worst, this stolen voodoo doll has now caused the subject’s wellbeing to be at risk. I genuinely hope it’s the former. This pattern of high expectation being suddenly thwarted by misfortune is sadly not alien to Newcombe and the group. The only difference is that the singer now weathers the tough times in a more collected fashion. Unfortunately, there is a small number of attendees who seem intent on riling the frontman, be it through stealing gifts or shouting Dandy Warhols song titles during quieter parts of BJM’s set. The rest just enjoy the band and appreciate that Newcombe’s strive for perfection is sometimes accompanied by non-standard behaviour. Gone is the violence, thankfully, but the frontman isn’t adverse to shooting dirty glances or reprimanding the playing of his excellent bandmates. The drummer, for instance, receives a quiet but stern telling off for ending Yeah Yeah too early before Newcombe apologises on her behalf for the unexpected tweak to the arrangement. Fellow perfectionists like James Brown used to dock the wages of his band for any ‘diversions’ they made onstage – Newcombe’s approach is simply more immediate than the late Godfather of Soul’s approach.

Banter is minimal, apart from Newcombe advertising his new London-based radio show, which incidentally is streamable via Soho Radio every Sunday between 4-6pm.

The set balances BJM’s back-catalogue with new material admirably. And, for an artist as prolific as Newcombe, that’s not an easy task. More recent tracks like Pish, from 2015’s Mini Album Thingy Wingy, are as well received as veteran audience faves like When Jokers Attack, Who and Anemone. In addition to the tambourine changes, guitars are regularly exchanged to provide different sonic flavours including multiple members brandishing 12-string electrics. It makes for a big and surprisingly well-defined sound for the duration of the gig. That definition is put to the test during A Word – the closing track of the evening. Two extra members, Leo and Shea from the road crew, are handed guitars and join the band onstage for a five-guitar assault. Wishbone Ash? Wishbone Who?

There’s no encore. But with a set of this length, there doesn’t need to be. Ultimately, I’ve always been puzzled by the draw of saving one’s allegedly ‘best’ tracks for an expected return to the stage anyway. 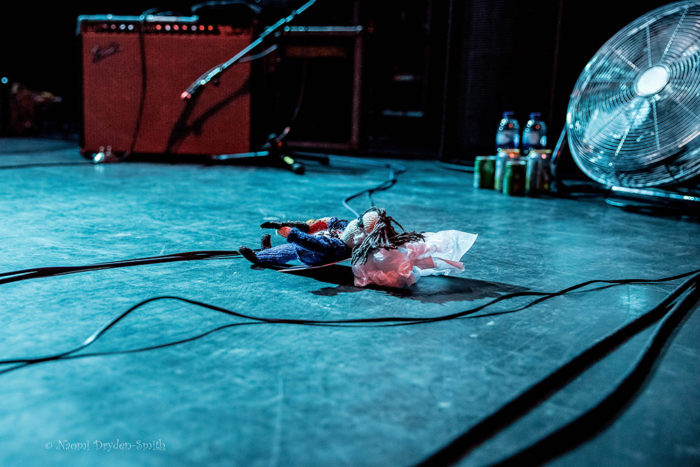 Fancy getting The Brian Jonestown Massacre on vinyl? Get ready to put the needle on the record and click your way here