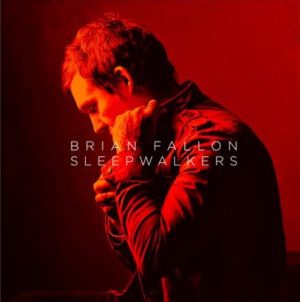 While the opening guitar/organ combo of Sleepwalkers might well share more in common with the likes of Fleetwood Mac, or more recently, Haim, it’s a record takes little time to establish itself as quintessential Brian Fallon.

Known predominantly for his work with The Gaslight Anthem, Fallon’s solo material isn’t a million miles away from the blue-collar, Springsteen-esque rock that they peddle, with tracks such as ‘Forget Me Not’ bristling with the same kind of wholesome, nostalgia-driven Americana that endeared Gaslight to so many. And though Sleepwalkers might feel somewhat familiar to fans of the aforementioned, there’s plenty that sets the two apart.

Rather than taking its cues from rock and roll alone, Fallon’s decision to use a Vox Continental organ across the course of the record adds an extra layer to its composition; its inclusion enhancing the gospel and R’n’B flavours that flow through Sleepwalkers. ‘Come Wander With Me’ for instance, throbs with a rhythmic intensity before blossoming in to the kind of stadium worthy anthemics we’ve come to expect from Fallon, all the while backboned by a subtle organ line.

Coming at the half way point, ‘Proof of Life’ is arguably the record’s most diverse track. Built around layers of guitars and lush percussion, it’s a folky number that exemplifies Fallon’s ability to tap in to a rich vein of classic American song-writing, proving himself as a modern-day Young, Springsteen or even Cash.

His knack for being able to paint pictures with his lyrics has regularly set him apart from his contemporaries, and never has it felt more realised than it does on Sleepwalkers. From the wistful balladry of ‘Etta James’ to shameless swing of the title track, there’s not a song on offer that doesn’t conjure ideas of a rose-tinted America many of us will never experience. And like Gaslight Anthem’s images of ‘50s Americana, replete with blue jeans and white t-shirts, Sleepwalkers evokes a different kind of nostalgia, though no less vividly; one tinged with regrets and unrequited love, alongside a sense of acceptance and optimism.

Going in to Sleepwalkers expecting something similar to Fallon’s work with Gaslight is certainly going to leave you disappointed, particularly as the record rolls in to its second half. Approach with an open mind however, and what you’ll find is a fantastic record from one of this generation’s strongest songwriters. At times bombastic, and at others tender and delicate, it showcases the range of Fallon’s ability exquisitely.