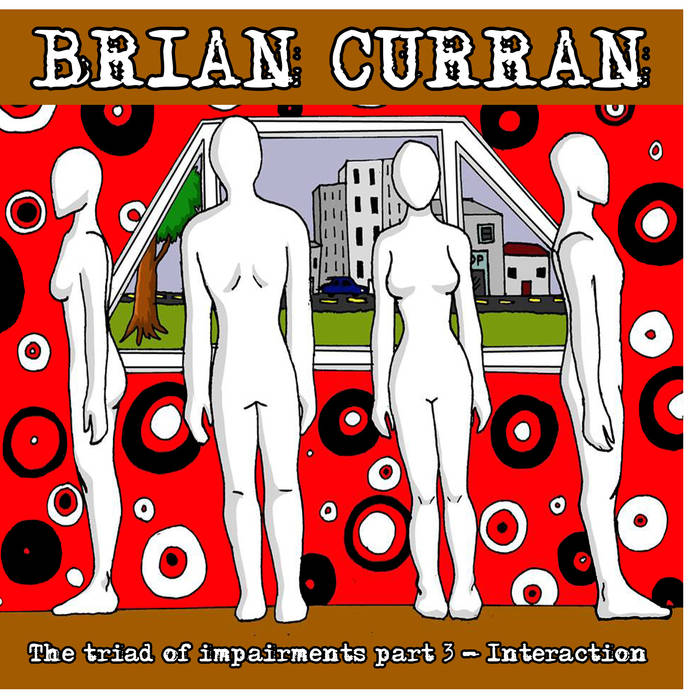 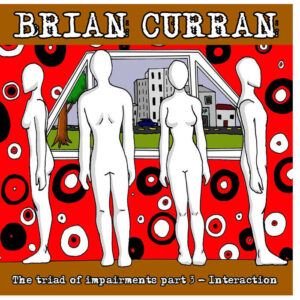 First, why the title?  The Triad of Impairments (Imagination, Communication and Interaction) are the main three areas of difficulty that people with Autistic Spectrum Disorder (ASD) face.  Brian wants to raise awareness of autism, and his son has an Autistic Spectrum Disorder.  So listen up!  In the song “Interaction Games” he pleads “We’re all the same human kind.  Accept our differences.”  If there is one message to take from this release, that’s probably the one.  And all monies from sales are going to Scottish Autism.

Who is this Brian Curran fella anyway?  As he reveals in “Rant” he don’t eat meat and he’s antifascist and although he wants “the Nazis off our streets, I don’t sing about it all the time as I don’t see the point”.   Later in “Dreams” (see video below), he confesses to being “Another dropout in full employment”.  Brian actually comes to us with fine provenance – playing guitar in political punk bands like Disaffect, Debris, D-beat mongers Ruin, plus singing and playing guitar in melodic hardcore band, Quarantine.

I’ve noticed a definite growth in the “punk with an acoustic guitar” phenomenon (distinct from the multitude of rabble pirate gangs of folk punks). It’s understandable.  There’s only 1 of you to be in time with, you don’t need a van for all the equipment.  You can perform in a venue of any size.  And you don’t have to try and co-ordinate with other people’s busy schedules to get the new song you’ve written ready for the world to hear. For me 1 person folk punk presents a “3 bears” porridge scenario.  Some of it is frankly awful (too punk? or just too shit!).  Some of it is good for a singer-songwriter but I fail to see the “punk” connection either in lyrical approach or attitude.   Seems like they use the punk tag for acceptance, validation or marketing purposes (too folk?).  And some, exemplified by T.V. Smith (whose solo acoustic performance I once described as “Watching someone with punk rock coursing through their veins and trying to burst out”) is, like the baby bear’s porridge, just right – anger and attitude projected by voice & acoustic guitar, not constrained by tradition or being radio friendly.  This doesn’t mean I look down on twee folky acts who could easily perform in their local pub on a Sunday afternoon, I just see no point in them latching onto the punk scene!  The folk scene itself was once a hotbed of radicalism, counterculture and perhaps the first “DIY” musical movement that was coherent and connected people across countries.  But they sang about real shit rather than reeling out the feel good tunes.  A good potential bedfellow for punk rockers.  Anyway, putting those potentially controversial observations aside, Brian Curran falls into the baby bear’s porridge category of anger and attitude delivered by acoustic means.    It’s punk Jim, but not as we know it.

You get an almost 50/50 split between trad folk tempo and upbeat melodic punk tunes that happen to be played on an acoustic. Some get an additional electric guitar and some drums but the core is still 1 man and his guitar.  Despite the ability to tickle the 6 strings like a proper musician, he’s not tempered himself – he’s an angry fella.  If you’re expecting the joviality of the Proclaimers (sorry, mate, I had to drop that in there) then you will be sorely disappointed.  It’s mostly shouty singing as befits an old anarchist punk who’s still refusing to “grow up” but when he drops into lower volumes I still sense a hint of menace and pent up simmering frustration.  Song topics range from the aforementioned ASD to social observation, personal reflections and what I’d call punk politics: “This ain’t no business, this is DIY!” he shouts, just in case you forgot.

In addition to his somewhat confrontational singing style, the way our man puts words together can be in your face too.  When he sings about domestic violence in “A drink, a slap & a kiss” he doesn’t use flowery metaphors you might get lost in, he confronts you with the horror by describing it. “He’s got his wife by the scruff of the hair, and he’s kicking and punching her at the bottom of the stairs”.  It shocks.  And it should. Powerful stuff.

Fans of Quarantine also get a little bonus in the acoustic rendition of “Vacant” from the “Automatic Negative Thoughts” LP.

With lyrics and an explanation of the thinking behind the trilogy it’s a good package.  I love the vibrant cover art.  My only complaint would be that just as I was getting into the beat of the techno-esque “Max” (performed by young Max Curran) which opens the CD it was cut short.

I’ve probably not really done this the justice it deserves and words cannot always express what is best left heard so give it a listen!

For copies of this CD, download, other releases or to have an exploratory listen, check out Brian’s bandcamp site or his website.